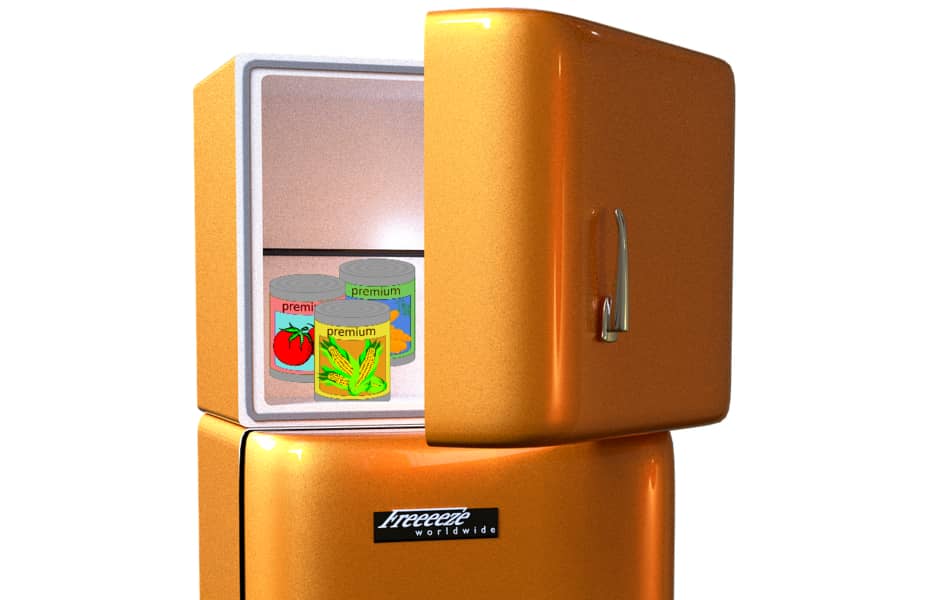 After winter begins there is a big freeze and you realize some canned goods in your garage. Undoubtedly, they froze during that time, and you might wonder if the food inside is safe to eat. This is a common scenario that I have personally dealt with. I did some research to find out all about it. Here is what I found out.

So, can you freeze canned food? Generally, it is not safe to freeze canned foods due to their water content. When water freezes, it expands, causing the airtight seal of the can to be compromised. Once the seal breaks, the food is exposed to the air, allowing bacteria to grow. The bacteria can cause foodborne illnesses and cause symptoms such as diarrhea, vomiting, and fever.

You might think that freezing canned food will prolong its longevity. However, knowing what is chemically happening inside the canned good and the possible dangers of eating unsealed products should make it clear why freezing canned goods is an ill-advised method to elongating their expiration date.

What Happens If You Freeze Canned Foods?

Keeping a good seal on canned foods is important. Freezing will potentially compromise the integrity of the can. Once the seal is broken, the food can become contaminated and begin to degrade over time.

My Canned Goods Froze; Are They Automatically Spoiled?

Luckily, no! It can be easy to spot if your food has potentially spoiled. Looking at the cans closely will help you determine this.

If the metallic can is intact but looks like it has bulged, you should also consider this as spoiled food. As bacteria grow, it can release gas, which can cause the metallic container to swell from increased internal pressure.

Beware of a bulging can: It is possible that during freezing, the structure of the can could become compromised in a way you cannot visually detect. Even if your canned food hasn’t been frozen, a bulging can is a clear sign of spoiled food and should not be consumed, even in desperate circumstances.

What to Do If a Can Passes Inspection

If you discover frozen cans that look intact and want to preserve the food inside, thaw them slowly. An excellent method is to place them in the refrigerator and allow the thawing process to take several days.

When this happens, the ice will slowly recede to its lower density form, water, and gradually reduce the internal pressure of the can. This assists the metal or glass container to retract slowly, too and prevents cracking.

Assuming no spillages or bulging are detected after thawing, the food is safe to eat. Use your sense of smell and taste to determine if the food is well-preserved even if the canned food does pass all visual inspections. However, food taste and texture will have likely depreciated.

As an extra precaution, if you can, heat the food above boiling to kill any lingering bacteria before consumption.

These precautions should prevent you from contracting foodborne illnesses such as salmonella and E.Coli.

Examples of Canned Foods to Not Freeze

Due to the potentially compromised seal due to freezing, canned foods (especially those with substantial amounts of water) should not be frozen.

Here are some examples of common canned foods to avoid freezing:

Just keep in mind that while I recommend not freezing certain types of canned foods, it’s not the end of the world if it happens. There is good anecdotal evidence that canned foods can be frozen and refrozen without anything negative happen.

For me, it’s more about being careful and safe. A good analogy would be while it’s probably okay to eat a steak 10 days past the expiration, it’s not something you want to do every meal.

If you want to freeze food that is or has been in a can, it is best to use plastic containers. Here is a good set of freezer-safe plastic containers that I recommend. (Click to see on Amazon). Alternatively, you can follow the safe canning process.

Is It Bad to Put Canned Food in the Fridge?

Once opened, you must make sure to properly store the canned food. The fridge is the logical place to keep it fresh.

Most people just throw some tin foil over the top and call it a day. However, this seldom provides an adequate seal. I recommend investing in some cheap can covers, like these found on Amazon, to keep your food safe and fresh.

At What Temp Will Canned Goods Freeze?

Will Canned Food Explode When Frozen?

Most canned foods will typically not explode when frozen. After some time, the can may bulge and the seal can be broken.

However, carbonated beverages can explode after freezing. Now, we are not talking about a violent explosion like fireworks. It’s more like when you drop a coke and it begins spraying coke out. The top of the can will pop off and liquid will spray out violently. The good news is that you don’t have to worry about the can flying around the room like Rocky the Flying Squirrel.

Check out this cool video documenting what happens to frozen beverages:

Can You Freeze Canned Food After Opening?

Freezing canned food after opening is fine, just make sure you transfer it to a freezer-safe container. Also, make sure it wasn’t left out too long. You may want to boil canned food immediately before refreezing it.

Are There Any Canned Foods That Can Be Frozen?

Canned foods that do not have substantial water content are probably okay to freeze most of the time.

The main reason not to freeze canned foods is that liquids expand upon freezing. Since there is nowhere for the ice to go, it pushes against the insides of the can, potentially compromising the seal.

How Does This Process Work?

Water is the colloquial name for oxidane, which is a compound consisting of two hydrogen atoms and one oxygen atom. Oxidane, unlike most molecules, in its liquid state (water) is denser than it is in its solid state (ice).

This decrease in density is due to the sizeable hexagonal lattice that the atoms form once it freezes. As density = mass/volume, and we have the same mass of molecules, the volume (or space) required for the less dense solid increases.

For example, 100g of liquid water, with a density of 1.0 g/mL, will take up 100 mLs of space. Whereas, 100g of ice, with a density of 0.92 g/mL, requires a volume of 108.7 mLs. This change in density as water freezes to ice is the phenomenon that allows icebergs to form, or why ice cubes float at the top of your drink.

Therefore, when water freezes in an enclosed space, such as a metallic can, or a glass jar, it exerts pressure on the containing structure. This sustained strain, or force, can be sufficient to break the seal, or in other words, “explode.” Once this happens, the foodstuff is exposed to the air, and harmful bacteria can more readily multiply, spoiling the contents.

Avoid freezing canned foods. To enable long-term storage, cans are pressurized to provide a low-oxygen environment. This atmosphere prevents bacterial growth and needs to remain sealed to keep the food from spoiling during storage. Freezing canned goods will likely lead to the breaking of that seal due to water expansion as it turns to ice.

Once the seal on your canned food is broken, the food is a prime breeding ground for bacteria. Ingesting this bacteria will possibly lead to food poisoning or, even worse, botulism.

Can I freeze canned food after opening? Yes, you can freeze leftovers from canned products assuming good food hygiene practice was used. Do note, however, that the texture and the taste of the food will likely be different after thawing.

Can you eat expired canned food? To determine if expired canned foods are safe for consumption, it is wise first to check the can itself. If the can is bulging, leaking, or open to the air, then the food is likely contaminated. If the container remains pristine, the food inside won’t make you sick. However, the taste and nutritional value of the product will decrease over time.

Should I be concerned with contracting botulism from canned foods? Botulism is a rare but life-threating infection caused by the ingestion of the bacteria Clostridium botulinum. It is associated with poorly canned low-acid foods, such as vegetables, meat, and fish. Be aware, you cannot taste the bacterium, and a small dose can lead to death. Therefore, if you see a canned food with a broken seal or any signs of spoilage, do not eat as the botulism bacteria may be present.