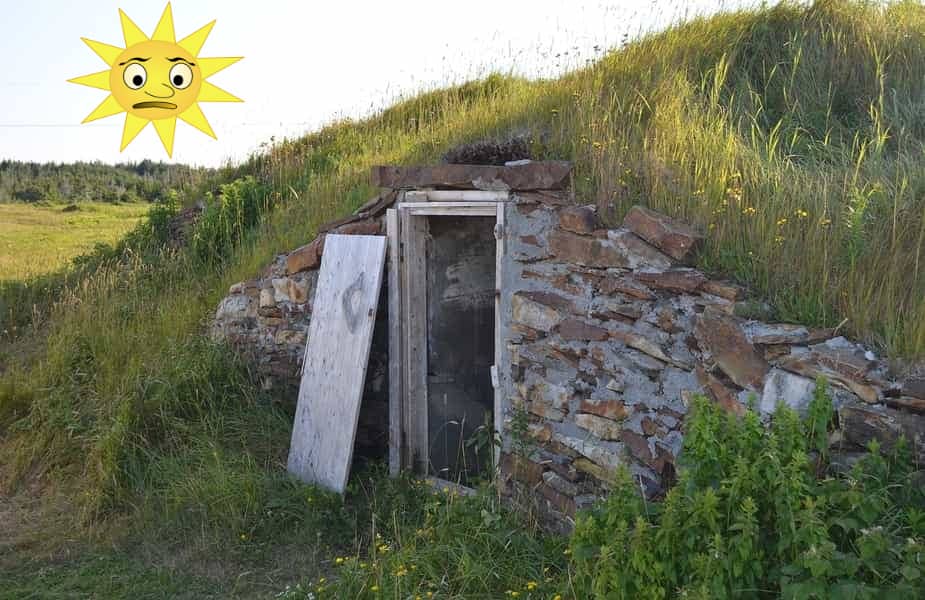 Being in the South, where winters are mild and summers are scorching, a lot of people often wonder if root cellars can work as an option. Seasonal crops have always created the problem of how best to store them throughout the year. Since I have lived and planted in the deep South my entire life, I can give you an informed answer.

The principle of stable temperatures being maintained in a below-ground environment holds true wherever you are. However, there is a range of problems that are more common in the southern states. So you will need to consider if these apply to your specific situation. And if root cellars are not the best solution, there are several other options, like alternative storage structures and extending the growing and harvesting seasons. Read on for more info.

Problems With Root Cellars in the South

Root cellars have historically been used for the storage of root vegetables and other produce in winter. They also proved useful in the warmer seasons, as they stay cooler than above-ground temperatures and will keep perishables cool. However, root cellars are largely the preserve of temperate climates, with warm summers and snowy winters.

In the southern United States, several issues can cause problems with root cellars. Historically, they have not been used there to the same extent. This is for several reasons, including temperature, higher groundwater and lack of necessity.

If nights are not cold enough to decrease the temperature, your root cellar will likely be insufficiently cold for long-term storage of some produce.

While some vegetables require cold temperatures, others do well at cool temperatures as well and you should check which vegetables can be best stored at the temperature your root cellar can reach.

Other vegetables will have a decreased shelf life compared to ideal situations. Consider how long winter lasts and when the growing season starts again to work out how long you will need to store produce at a minimum. Don’t forget to regularly monitor temperature (and humidity) in your root cellar with a hygrometer, like this one found on Amazon.

Root cellars are underground and this can cause problems if water table levels are higher than in other regions. Rainfall makes a significant difference as well.

Typically, root cellars are around 10 feet (3 meters) deep, which is the depth where temperature stability is reached. At these depths, many cellars get flooded easily in southern states, due to groundwater levels and seasonal, torrential rainfall.

While humidity is important in root cellars, standing water will cause your produce to spoil, damage the structure of your cellar and encourage the growth of mold and the spread of waterborne disease. Therefore, you need to consider both soil and groundwater conditions.

If you are able to build a root cellar at a higher altitude, for example on a hill, this may solve some of these issues. Also, make sure your root cellar has adequate drainage, and ventilation to avoid the stagnation of mold and other spores.

In addition to the above-listed problems, another concern you should be aware of is venomous and otherwise dangerous wildlife, like snakes, which often also enjoy sheltering in temperature-controlled environments. This is especially problematic when there is also food available for them. You should be careful to ensure your own safety when using a root cellar.

Do I Even Need a Root Cellar in the South?

This depends entirely on your storage needs. If you have the space to safely store your vegetables above ground in winter, you can do so. Many can be mulched where they grow, however, success for this varies and leaves your produce vulnerable to animals and insects.

However, frost does not pose the same problems it does in more northern regions. Therefore, a root cellar is not always required to keep produce at a stable, above freezing temperature. The growing season is also longer in southern states and by extending the growing season as much as possible, you can dramatically reduce the need for storage.

On the other hand, if you wish to store produce over the summer, a root cellar will not keep your items as cool. This is because, as a rough estimate, the stable temperature a root cellar has below ground, will be higher in the South as the temperatures never get low enough to keep the ground cool.

Always monitor the temperature in your root cellar when using it to store perishable items like fresh meat, fish or dairy products as shelf life will be reduced if temperatures are too high.

How to Build Alternative Storage Solutions?

One of the best, but also difficult ways to achieve a similar effect to the root cellar is by using a spring house. Unfortunately, this method relies on you being lucky enough to have a spring or similar water source on your property. A well-insulated shed or similar building over the spring will stay cool throughout.

Using insulated containers, such as old fridges or picnic coolers and burying them largely in the ground for further insulation can help keep items that are already cold at that temperature for much longer. Be careful about toxic coolant materials used, as well as the dangers of old locking fridges which can inadvertently lock an animal, or even child inside. If you want to make the most of the insulating properties of these containers, avoid opening them too often.

If root cellars are structurally unsound or too prone to flooding, consider burying a metal storage container or similar structure (even a metal trash can) and insulating it with earth and straw. This will not change the problems you may have with reaching cold enough temperatures, but a sound container with good ventilation can reduce the dangers of excessive moisture.

How Do I Extend the Growing Season?

The best way to extend the growing season is to plant several times using succession planting. First, consider how far into autumn and early winter your produce will continue growing. You can look up the average temperature and other information online. Together with the length of time each crop takes to grow and ripen, you can create a schedule for planting.

Don’t forget that many crops can be kept in their beds over winter as long as the temperatures remain above freezing. While they will not grow, they will also spoil slower. This works for all produce which you would replant in a root cellar, such as salads and other leafy greens, as well as many root vegetables which can be mulched.

Therefore, while root cellars are not always an ideal option in the southern states, you still have a number of options to eat your own produce year-round.

Here are a few storage-related Amazon products that you may find helpful:

I took the time to some things you might need if you build a root cellar.

How cold is a root cellar? The optimal root cellar temperature is usually between 32 and 40 degrees Fahrenheit for most root vegetables. Also, the humidity is usually best kept at between 90 and 95 percent.

How deep is a root cellar? The idea depth of a root cellar is 10′ (3m) or greater. This allows for the temperature and humidity to remain fairly stable.