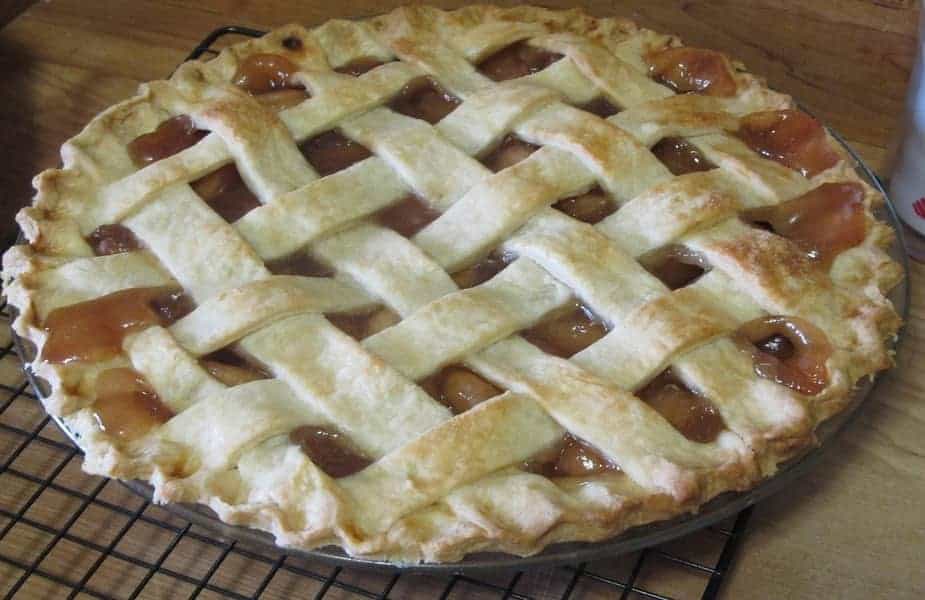 I have been told for years that apple pie can be baked ahead of time and left out covered on the counter. This has meant that Thanksgiving and Christmas mornings could be devoted to the rest of the meal without spending time and valuable oven space on pies. But is it really safe to leave apple and Dutch apple pies out at room temperature overnight? I did some research to make sure and this is what I found out.

Apple pie, whether regular or Dutch apple, does not have to be refrigerated. This is because they are not made with any eggs or any form of dairy and contain only fruit, sugar, and spices. According to the USDA, they will be good for 2 days at room temperature and an additional 2 days in the fridge.

The scientific reason apple pies do not need refrigeration is that they do not contain the levels of protein and moisture that support the relatively fast growth of bacteria that would make it necessary to refrigerate them soon after they are made.

How Long Does Apple Pie Last Once Baked?

How long apple pie lasts, as with any other type of pie, depends on the ingredients and the temperature of the room after it is removed from the oven. More specifically:

Here are recommendations for how long most types of pie last with refrigeration and without:

How to Tell If Apple Pie Has Gone Bad

There are a few things you can do to make your apple pies last longer.

What to Do If You Have Too Many Pies

If you should find yourself with too many leftover apple pies and you have given away as many as you possibly can, put them into the freezer unwrapped until completely frozen. Then, wrap them carefully with foil and freeze them to be used at a later date. Most apple pies will last for 6 to 8 months in the freezer.

Can Apple Pies be Frozen?

Apple pies can definitely be frozen for 6 to 8 months, and possibly for up to 1 year.

Wait until the pie is completely cooled before freezing. Apple pies should be placed in the freezer unwrapped until completely frozen, then wrapped in a good layer of aluminum foil to protect from freezer burn.

Remove the frozen pie from the freezer 12 to 24 hours before serving and remove the foil and plastic wrap. Allow the pie to thaw in the refrigerator to avoid condensation that would ruin the crust by making it soggy. Let me stress here that any frozen pie should not be allowed to thaw at room temperature, which would cause condensation that would make the pie crust soggy. Instead, allow any frozen pie to thaw in the refrigerator.

After a frozen apple pie has completely thawed, it can be reheated in a 350 degree Fahrenheit oven for approximately 30 minutes, and it will taste just like fresh!

How to Store an Unbaked Apple Pie

NOTE: When taking a pie from freezer to oven, I recommend using a metal pan as pyrex, and even corning ware have been known to shatter when going through these drastic temperature changes.

How to Store Apple Pie From the Grocery

Unlike most homemade pies, apple pie purchased from the grocery or supermarket contains preservatives that allow them to remain unrefrigerated. So, if you bought a pie from a deli, it will be good unrefrigerated until it’s expiration date. But, if you purchased it from the freezer or refrigerated section, the pie and any leftovers will need to be stored in your refrigerator.

What Is the Difference Between Apple Pie and Dutch Apple Pie

The difference between apple pie and Dutch apple pie is in the topping. Apple pie has a pie crust top and bottom with the apple pie filling nestled in between. The Dutch apple pie, however, has a bottom crust into which the pie filling is poured and, finally, is topped by a streusel made of sugar, butter, and flour sprinkled on top of the pie filling before it is baked. You can compare the two in the following recipes:

However, sugar-free fruit pies must be refrigerated because they do not have the benefit of the preserving properties of pure cane sugar. Also, fruit pies that are made with any of the many sugar substitutes available to us, including Stevia, Truvia, ….., must be refrigerated because even though these products are sugar substitutes, they do not contain the preserving properties of sugar.

So, once again, even though fruit pies do not require immediate refrigeration, they are only good unrefrigerated for up to 2 days. At this time, they can be refrigerated for 2 additional days and then frozen for 6 to 8 months.

Another vital thing to keep in mind was when the pies were baked, when they need to go into the refrigerator or freezer, and when they should be discarded. It is not always possible to determine by sight and smell just when a pie is no longer safe to eat. If you make quite a few pies for a holiday meal, just keep a record somewhere of the date each one was baked along with the following information: