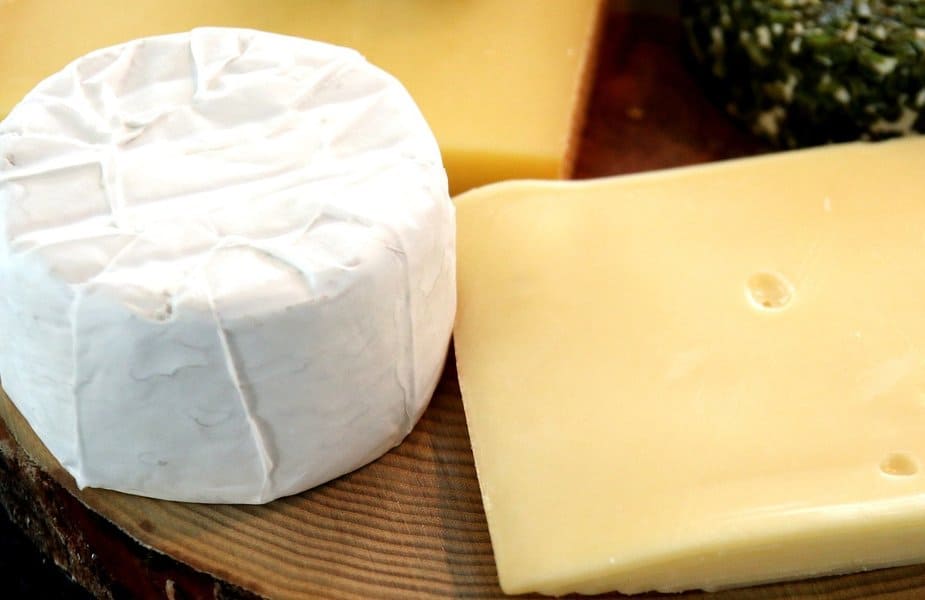 Cheese has long been one of my favorite foods as a quick and simple snack or as elegant party food. Although I am careful about keeping all types of cheese refrigerated most of the time, there are occasions when I like to keep a variety of hard cheeses for snacks during a family gathering or even for lunch during a hike or other outing. But, just how long can I expect these cheeses to stay good unrefrigerated? This required a little research, but here is what I found.

Generally, the harder the cheese the longer it will last. Softer cheese, like cream cheese, or processed cheeses, like American slices, can be left out for no more than two hours after opening. Hard cheeses, like cheddar, swiss, or gouda, can last for a long time, even several weeks, unrefrigerated.

How Long Does Cheese Last Once Opened?

How long cheese lasts depends on a number of things including the temperature, how it is packaged, whether it has been aged and for how long, and the type of cheese.

Here are recommendations for how long the three main types of cheese last after opening with refrigeration and without:

How to Store Opened Cheese

In order to maximize how long your cheese will last, I recommend either storing it in an airtight container or using specially designed cheese storage bags, like these found on Amazon.

Can Cheese be Frozen?

Not all cheese can be frozen.

How to Tell If Cheese Has Gone Bad

Here are the primary ways to tell whether each type of cheese has gone bad:

Hard cheeses are also easy to determine whether they have gone bad. Here are some things to look for:

Soft cheese goes bad much faster than hard cheese because the amount of moisture in the soft cheese allows bacteria to grow and mold to form.

There are a variety of things you can do to increase the shelf life of cheese.

Processed cheeses that are purchased in cans, jars, and loaves do not require refrigeration prior to opening, but should be kept in a cool, dry area away from heat sources and direct sunlight and refrigerated as soon as the container is opened.

If you recently had a party and find yourself the proud owner of a variety of different packages of cheese, all of them opened, here are a few things you can do to keep from having to throw a lot of cheese into the trash. Start by sorting them into the different types, soft cheese, processed cheese, and hard cheese.

Types of cheese that would never be safe to leave unrefrigerated are the soft cheeses such as cottage cheese, cream cheese, ricotta cheese, soft ripened cheeses like Brie, fresh mozzarella, Camembert and Brie, because the softer cheeses contain high amounts of moisture which are a magnet for mold-causing bacteria which would render the cheese unsafe to eat.

Interesting Facts About and a Brief History of Cheese and Cheesemaking

According to the National Historic Cheesemaking Center in Monroe, Wisconsin, the exact origins of cheese and cheesemaking are unknown, but there is historical evidence that the Ancient Greeks and Egyptians were making some versions of cheese 4000 years ago.

This could possibly have occurred by accident because of their use of cow stomachs for storing many things, including milk, which would have mixed the milk with the enzyme Rennet, or by their adding the juice of some fruits or salt to preserve the milk, all of which would have caused the milk to curdle and form curds and whey. Because our early ancestors had no refrigeration, cheese was one of the first methods developed for the preservation of milk.

However it happened, by the era of Julius Caesar (100 B.C. to 44 B.C.), cheesemaking was an important activity and cheese was a valuable trade commodity which had spread throughout Europe and the Middle East through the early trade routes.

Cheese was brought to America by the Puritans who also brought their skills in cheesemaking with them from England. With the westward movement of the early immigrants to this country, the art of cheesemaking made its way to Wisconsin where in 1741, Wisconsin’s first cottage industry cheese factory was established by Mrs. Anne Pickett.

Wisconsin now produces over 25% of the domestic cheese in the United States and is the only state to offer a cheesemaker the opportunity to become a “master cheesemaker!”

“After all, cheese was developed approximately 4000 years ago as a method of preserving milk at a time when there was no refrigeration.”

I’ve always been a lover of all kinds of cheeses and had the good fortune a few years back to spend some time in France where I was treated to some of the best cheeses I’ve ever had that were produced in the local fromageries (cheese factories).

My friends would arrange them on a cheese board after dinner each evening so that I could eat them beginning with the mildest and ending with the very strong. They said that once you eat the stronger cheeses, you cannot immediately taste the mild ones. I was so vocal about how good the cheeses were that I was sent home with a variety, and the fact that it remained unrefrigerated for about 3 days did not detract from the taste nor the texture of those fine cheeses. After all, cheese was developed approximately 4000 years ago as a method of preserving milk at a time when there was no refrigeration.

So, does cheese have to be refrigerated? The answer is a resounding no, as long as you are talking about a variety of hard cheeses. But, you may certainly refrigerate those cheeses at a temperature between 35 and 40 degrees Fahrenheit if you wish to significantly extend its shelf life and preserve the texture and taste.

When serving soft and processed cheeses, it is safer to discard them if they have been sitting out for more than 2 hours, and hard cheeses should be wrapped well and put back in the refrigerator if they have been unrefrigerated for 4 hours or longer.

For your convenience, here is a summary of the products mentioned in this article or items you may find appealing.

Also, if you happen to be looking to store food for the long term I recommend My Patriot Supply.

link to Can I Use Nesquik Instead of Cocoa Powder in a Recipe?

American cheese is a classic, and its versatility is unparalleled in the dairy world. However, sometimes you are either out of it or just want a replacement for one reason or another. Luckily, there...