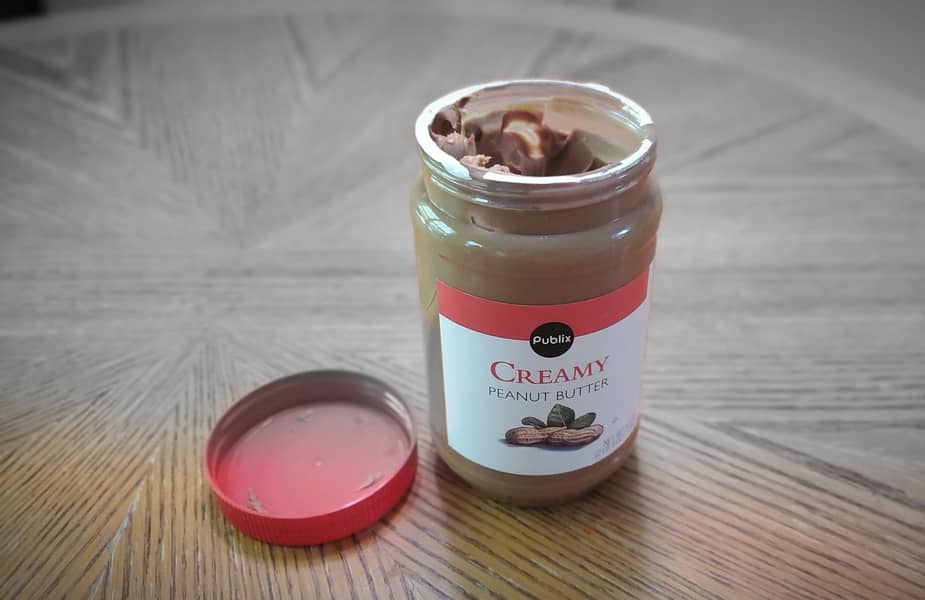 I had never stored peanut butter in the refrigerator until a few years ago when I discovered that my mother-in-law refrigerated her peanut butter. Now, granted, she did use the natural kind while I have always just used the regular stuff, often generic. Also, she didn’t eat peanut butter as often as we do, and a jar in her refrigerator lasted a lot longer than at our house.

Peanut butter is shelf-stable even after it has been opened and does not need to be refrigerated. When purchased having been canned by the manufacturer using a USDA approved canning process, it will last a significant amount of time in your pantry even after the expiration date.

But, the real question is whether they should be refrigerated after opening. So, let’s explore peanut butter and related products (including Nutella) in greater detail.

What Do the Peanut Butter Companies Say About This Issue?

The leading manufacturers of peanut butter, Jif, Skippy, and Peter Pan, all agree that their products do not require refrigeration but will maintain their fresh taste longer when kept cold, although it may cause the oils to separate and will make it harder to spread.

Here is information found on the websites of three of the largest manufacturers of peanut butter:

You can find the “Best By” date printed on the lid! SKIPPY® Peanut Butter should be enjoyed before that date—which shouldn’t be a problem!”

“This varies slightly depending on the actual product. Creamy and Crunchy varieties of Peter Pan Peanut Butter have a recommended shelf life that is 18 months from the date of manufacture. Beyond this date, the product does not spoil but may develop “off” flavors due to age. The end of the recommended shelf life is noted by the “Best By” date stamped on the jar.

You may store both unopened and opened jars of Peter Pan Peanut Butter at room temperature. Exposure to air and excessive heat may accelerate the loss of optimum flavor and—in the case of heat exposure—cause oil separation. Avoid this by keeping the jar tightly closed and in a cool place. Cold temperatures, even those that still are above freezing, may change peanut butter’s consistency, texture, and thickness.

The manufacturer of Nutella, Ferrero, also states that the hazelnut spread does not require refrigeration. In fact, it should not be refrigerated at all. All agree that peanut butter and Nutella should not be frozen and should be discarded after the expiration of the “best by date.”

How Long Does Peanut Butter and Nutella Last Once Opened?

How long peanut butter lasts depends on whether it is regular commercial peanut butter or whether it is all-natural containing only peanuts and salt, and how it is stored, before and after the jar is opened. USDA recommends only buying what you expect to use within the time recommended on the label for each product.

Here is the shelf life of a few common types of peanut butter and Nutella:

Type 3 – Unopened Jars – Go by expiration date on the label

How to Tell If Peanut Butter and Nutella Has Gone Bad

Here are some common-sense practices that can help to keep your peanut butter and Nutella good for a longer period of time:

If you find you have several jars of peanut butter that have been opened:

See below for some examples of recipes that use peanut butter as an ingredient.

If you inadvertently open more than one jar of Nutella at the time, it would be a great time to have pancakes, waffles, Belgian waffles, English Muffins, or just plain toast and spread on the Nutella. All that’s left to do is enjoy the treat!

Types That Would Not Be Safe to Ever Leave Unrefrigerated:

In my opinion, no type of natural peanut butter would ever be safe to leave unrefrigerated after opening because they do not contain any preservatives, and the natural oils would become rancid faster than the hydrogenated oils used in regular peanut butter.

Interesting facts about the product and a brief history

Even though the peanut butter that we know and love was first introduced at the St. Louis World’s Fair in 1904, there were variations produced as early as 1895, by Dr. John Harvey Kellogg, of Kellog’s Company fame, and then another version that was developed by a St. Louis physician as a dietary supplement for his patients whose teeth were so bad they couldn’t eat meat.

But, the main ingredient, peanuts, has a long and interesting history. There is evidence that peanuts originated in South America, in either Peru or Brazil, at least as far back as 3500 years ago. This was determined by the discovery of pottery from that era that was either in the shape of a peanut or painted with pictures of peanuts, and peanuts were found in the tombs of the Inca Indians of Peru having been placed there as sacrificial offerings. There is also evidence that early tribes of Brazil made a drink by grinding corn and peanuts together.

Early European explorers took the peanuts they found in South America back to Spain, where they eventually spread to Asia and Africa through the early trade routes and were eventually brought to North America from Africa. Virginia planters began to grow peanuts in the 1800s but considered them to be food for livestock and the poor. It wasn’t until soldiers in the Civil War discovered they liked peanuts and took them home after the war and began planting them that peanuts became a prominent crop throughout the South.

P. T. Barnum’s circus gave the peanut the boost it needed to become an important food crop as the circus traveled around the country selling “hot roasted peanuts,” thus creating a demand for the lowly peanut. And, with the help of modern farm equipment and methods developed by Dr. George Washington Carver to control the boll weevil, peanut production finally became a cost-effective crop.

Peanuts and peanut butter became an important part of the United States Military MRE (Meals Ready to Eat) rations during World Wars I and II, and the United States Army is credited with having made the peanut butter and jelly sandwich a popular meal or snack in America by using them for food for the troops during field maneuvers during World War II.

U.S. peanuts fall into four basic types: Runner, Virginia, Spanish and Valencia, each of which has a distinctive size and flavor. Other countries grow similar types of peanuts but by different names.

Peanuts are grown in 13 Southern states across the United States, as well as other countries around the world. China is the number one producer at this time, with the U.S. coming in as the third-largest producer of peanuts.

There are many added benefits to eating peanuts and peanut butter, either as a snack or as part of a meal, as they are naturally cholesterol-free, are protein powerhouses, and offer protection from chronic diseases such as heart disease and cancer and from diabetes.

Nutella got its start as a solution to the shortage of cocoa following World War II when an Italian pastry maker, Pietro Ferrero, created a paste from hazelnuts, sugar, and just a little cocoa and called it “Giandujot” after a famous circus performer of the time. The original form of what would later be called Nutella was shaped into a loaf, sliced, and served on bread. This creation led to the official founding of the Ferrero Company on May 14, 1946.

This original Giandujot was later transformed into a product called SuperCrema that could be spread onto bread, and Mr. Ferrero’s son Michelle continued to improve the product until the delicious hazelnut cream spread that we know today was created and given the name Nutella.

Nutella spread to Germany, where it was a huge success, then to France, all of Europe, and to Australia.

From there, Nutella made its way around the world and now has its own global Facebook page that reaches 10 million fans, and on May 31, 2017, the first Nutella Cafe was opened in Chicago where all Nutella fans can go to experience a wide variety of menu items “designed to take your taste experience to new and delicious heights.” https://www.facebook.com/NutellaCafeChicago

Apple and Banana Pops With Nutella

Combine ingredients and mix well. Form into balls and place on a prepared baking sheet. Bake for 10 to 12 minutes at 350 degrees. Let cool before removing from the baking sheet.

There are many added benefits to eating peanuts and peanut butter, either as a snack or as part of a meal, as they

Although peanuts are considered to be one of the earliest known foods, their popularity has grown by leaps and bounds in recent years as the peanuts themselves and the many products made from them, mainly peanut butter, are now considered to be “Superfoods” and some of the most nutritious, convenient, and affordable foods available to us. How many other kinds of high protein foods can you use to prepare a meal for your family that does not have to be refrigerated?

Nutella, like peanut butter, doesn’t require refrigeration. This makes both the perfect solution for lunches on workdays, picnics, hiking trips and many other occasions when refrigeration is not handy.