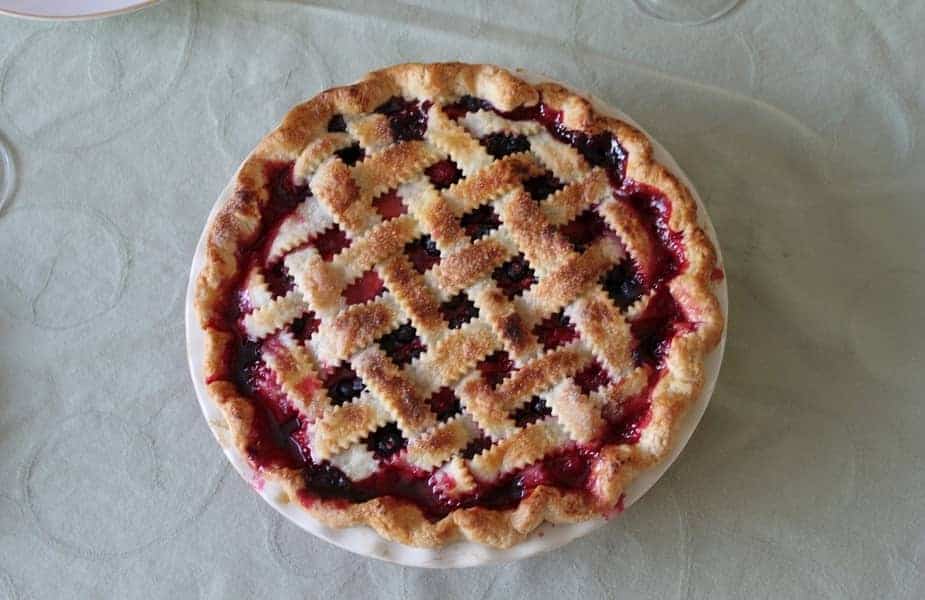 Because pies are all rather large and many have meringue or another kind of topping that makes them rather cumbersome to fit into the refrigerator, many people want to know whether pie must be refrigerated. I for one have been guilty of making pies for a holiday meal the day before the big event and leaving them out overnight until needed the next day. It seems that I have been mistaken in thinking this is okay.

Any pie that contains a dairy product of any kind and/or eggs must be refrigerated within 2 hours of being made. Only the fruit pies can safely be left out at room temperature for up to 4 days, at which time they should be refrigerated or frozen.

Or maybe the question should be, what kinds of pie must be refrigerated and how long is it safe to leave them unrefrigerated. Now let’s explore the subject in greater detail.

How Long Does Pie Last Once Baked?

How long pie lasts depends on the ingredients and the temperature of the room after it is removed from the oven. There are three main types of pie; cream or custard, fruit, and savory. All cream, custard, meringue, chiffon, pecan, pumpkin, sweet potato, and even savory pies like quiche and frittata should be refrigerated as soon as possible after baking. High levels of protein and moisture in those ingredients support the growth of bacteria.

Here are recommendations for how long pie lasts with refrigeration and without:

How to Tell If Pie Has Gone Bad

There are a few things you can do to make your pies last as long as possible.

What to do if You Have too Many Pies

If you should find yourself with too many leftover pies or portions of pies after that big family gathering and you have sent as much pie home with family members as you possibly can, don’t let them hang around too long and go bad. Just wrap them carefully with foil and freeze the ones that freeze well like apple, pecan, sweet potato, and pumpkin and pull them out at a later date when you need a quick dessert. Most pies will last for 6 to 8 months in the freezer.

Can Pies be Frozen?

Many pies can be frozen for use at a later date. Just make sure you use a freezer-safe container. Here is a list of pies that freeze well:

Pies that cannot be frozen:

If you don’t have a freezer-safe container, wrap the pie in at least 2 layers of plastic wrap, making sure there is a good seal to avoid odors from other foods. Then, add a good layer of aluminum foil to protect from freezer burn.

Remove the frozen pie from the freezer 12 to 24 hours before serving and unwrap the foil and plastic wrap. Allow the pie to thaw in the refrigerator to avoid condensation that would ruin the crust by making it soggy.

Interesting Facts About the Pie From the American Pie Council

Even though the experts say that pies made with any type of dairy product and/or eggs should be refrigerated within 4 hours of baking and long-time bakers like me sometimes leave pies out overnight if necessary, the U. S. Department of Agriculture actually recommends that all cooked food be refrigerated within 2 hours of cooking since bacteria grow rapidly between the temperatures of 40ºF and 140ºF.

This gets confusing when you see pies sitting on tables and in display cases for who knows how long waiting to be sold. However, the story here is that those pies contain preservatives not found in your homemade versions.

So which is it, does pie have to be refrigerated after baking or not? My recommendation would be to err on the side of safety and refrigerate your pies that have any type of dairy product and/or eggs as ingredients, as soon as you possibly can, especially if the weather is above 90 degrees F. Push and shove all that food aside that you have in the refrigerator and make room for the pie. A pie taker or a bowl turned upside down over a pie will allow you to stack your pies to take up as little space as necessary.