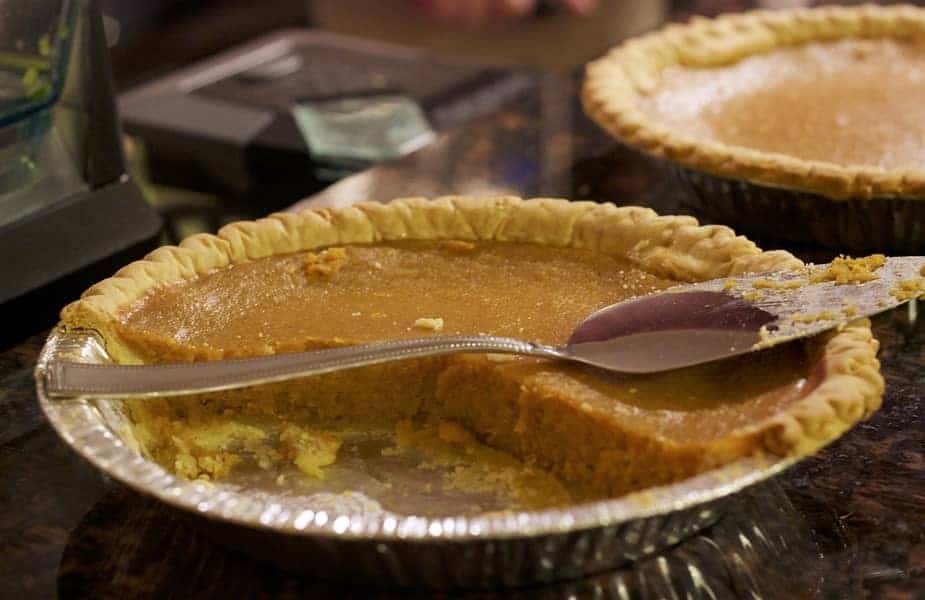 Pumpkin pies are holiday favorites. We are all at some point in our lives tempted to bake the pies for our holiday meal ahead of time so that Thanksgiving and Christmas mornings can be devoted to the main course. And, because pies are all rather large and take up a lot of room in the refrigerator, there is always the temptation to leave them out at room temperature overnight. But is this practice safe? After a lot of reading on the subject, this is what I discovered.

Pumpkin pies must be refrigerated since they are made with milk and eggs. The high levels of protein and moisture contained in those ingredients support the growth of bacteria and make it necessary to refrigerate them. In fact, the USDA says they should be refrigerated within 2 hours of being baked.

How Long Does Pumpkin Pie Last Once Baked?

How long pumpkin pie lasts, as with any other type of pie, depends on the ingredients and the temperature of the room after it is removed from the oven. More specifically:

Here are recommendations for how long most types of pie last with refrigeration and without:

How to Tell If Pumpkin Pie Has Gone Bad

There are a few things you can do to make your pumpkin pies last longer.

What to Do If You Have Too Many Pies

If you should find yourself with too many leftover pumpkin pies or portions of pies after that big family gathering and you have sent as much pie home with family members as you possibly can, don’t let them hang around too long and go bad. Just wrap them carefully with foil and freeze so they can be pulled out and used later when you need a quick dessert. Most pumpkin pies will last for 6 to 8 months in the freezer.

Any pies made with dairy products and/or eggs would not be safe to eat if left unrefrigerated after baking. This certainly includes pumpkin pies.

Can Pumpkin Pies be Frozen?

Pumpkin pies can be frozen for up to 6 or 8 months, and possibly for up to 1 year.

Wait until the pie is completely cooled before freezing. Wrap the pie in at least two plastic wrap layers, making sure there is a good seal to avoid odors from other foods. Then, add a good layer of aluminum foil to protect from freezer burn and put it in a freezer-safe container, for extra measure.

Remove the frozen pie from the freezer 12 to 24 hours before serving and unwrap the foil and plastic wrap. Allow the pie to thaw in the refrigerator to avoid condensation that would ruin the crust by making it soggy.

How to Store Pumpkin Pie From a Store

Unlike most homemade pies, pumpkin pie bought from the grocery or supermarket is probably loaded with preservatives that make it alright to let them sit out unrefrigerated. So, if you purchased a pie that was sitting out at the store, it will be alright to sit out in your kitchen until it’s expiration date. But, if you bought it from the freezer or refrigerated section, the leftovers will need to be stored in your refrigerator.

We often read or hear conflicting information on whether pumpkin pies have to be refrigerated. Some experts say pies made with dairy products and/or eggs should be refrigerated within 4 hours of baking. Then you have some old-timers who say they leave pies out overnight if necessary. And to add to the confusion, you see pies in the supermarkets on display for hours waiting to be sold.

So, which advice should we take? Should we listen to the experts, the old-timers, or what we see with our own eyes? Well, the pies that we see on display at our local grocery stores contain preservatives that our homemade pies do not have. The experts are probably just considering the length of time it takes for the pies to cool and then add 2 hours. The old-timers? They don’t tell you that they place the pies in the coolest room in the house or on a screened porch to spend the night.

All things considered, my recommendation is to take the advice of the U. S. Department of Agriculture, which recommends that all cooked food be refrigerated within 2 hours of cooking since bacteria proliferate between the temperatures of 40ºF and 140ºF. Just go ahead and give the pies an hour or so to cool and make room in your refrigerator to slide them in. They should fit nicely right on top of a casserole dish.

One more little hint, you could just make your pie crust and mix the pumpkin pie filling a couple of days before the holiday and refrigerate them. Then, right after the turkey comes out of the oven on Thanksgiving morning, pour the pie filling into the crust and slide it into the oven. Don’t forget to set the alarm, and you will have hot pumpkin pie fresh out of the oven for your holiday guests. What a treat!

Before I go, I’ve been dying to try this recipe for pumpkin pie the way the pilgrims made it from the Souffle Bombay website. I thought you might be interested in it as well.