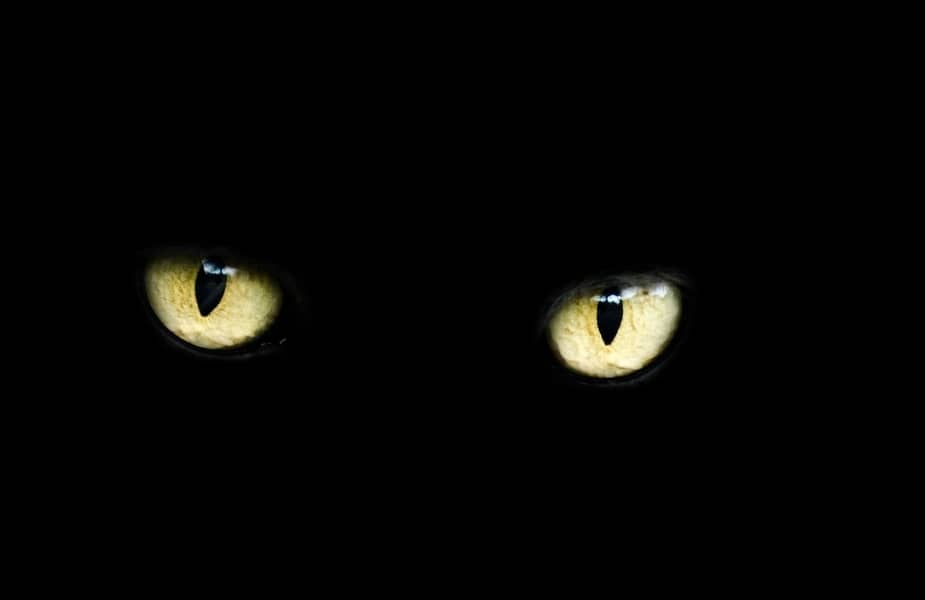 Whether you are a hunter or just curious about what animal is in the woods near you, being able to identify them by their eyeshine is a pretty cool skill to have. I did a lot of research but had trouble finding a good resource. So I decided to compile everything I learned and share it here with you. This is what I found out.

This article will examine why some animals have eyes that glow in the dark and how this feature helps them survive. We’ll also share a helpful eyeshine chart that you can use to identify animal eyes in the dead of night.

Why Do Animal Eyes Shine at Night?

Before we look at what colors go with actual animals, let’s talk a bit about the science.

Many animals have a thin reflective membrane at the back of their eyes, known as tapetum lucidum. This reflective membrane layer lies behind the iris and acts as a retroreflector, which means it reflects light back at the source – in this case, back at your flashlight.

It reflects visible light passing through the retina back to increase the amount of light on the photoreceptors. The presence of a tapetum lucidum gives nocturnal carnivores superb night vision.

The animals reflect the light directly towards the light source to give the retina a succinct image to analyze. Cats have incredible night vision because the reflective effects boost their night vision.

By matching the original and reflected light, the reflective layer maintains the image’s contrast and sharpness. The reflective layer uses constructive interference to increase the amount of light passing through the animal’s retina.

This phenomenon is also known as eyeshine because the glowing eyes are simply reflections of the light source trained at the animal. Shining light directly on the face of an animal with a tapetum lucidum causes the eyes to glow.

Eyeshine comes in various colors, including white, yellow, red, blue, pink, or green. Since the reflective layer is iridescent, the pupils’ color is affected by the angle of vision, eye color, and the mineral makeup of the tapetum lucidum.

A tapetum lucidum improves an animal’s ability to see in the dark and low-light conditions. The reflective eye membrane is typical in mammals, reptiles, invertebrates, and amphibians.

The eyeshine color depends on the animal and can be red, orange, yellow, pink, blue, or green. The sheen depends on eye color, the shape of the eyes, and the light’s angle shining on the animal.

The intensity of the eye glow varies between species, with some animals glowing brighter than the rest. The animals with the brightest eyeshine have excellent night vision because their eyes have fewer cones. Unfortunately, perfect night vision comes with limited color vision or complete color blindness.

Most of the nocturnal predators have a tapetum lucidum to help them see in the dark. Dogs, house cats, big cats, alligators, and ferrets are some of the predators with eyes that reflect in the darkness.

Improved night vision is essential to these predators because it allows them to track prey in pitch darkness.

Cool Fact: Some predatory fish, like walleye, need excellent night vision to hunt in the dark, deep waters. As a result, they have reflective eyes.

Interestingly, while owls have eyes that glow in the dark, they lack a tapetum lucidum in their eyes.

Unsurprisingly, some of the prey targeted by the predators with improved night vision developed a tapetum lucidum layer. The layer evolved as a defense mechanism to help these herbivores detect predators in low-light conditions.

While it’s possible to identify some animals by their eyeshine, the eye glow color is more of a guideline than accurate science.

Several factors influence the color of an animal’s eyeshine, including:

Here’s are tables grouping animals by their eyeshine colors:

It’s important to note that accurately identifying an animal at night might require more information than just their eye color. If you can, try to use the animal’s general size, behavior when looking at you, habitat, eye size, and more.

Some animals with characteristic red eyes at night include:

Some animals have glowing yellow eyes at night, including:

Some animals with eyes that glow green in the dark include:

Some of the animals with eyes that glow white in the dark include:

Shining a flashlight into the darkness only to see a pair of glowing eyes staring back at you can be a bit frightening. And unless you know whether those eyes belong to a dangerous predator or a harmless herbivore, you won’t know whether to ignore them or be on your guard. Fortunately, you can identify an animal by its eyes at night if you have the correct information.

Some animals have eyes that glow in the dark because they have a special reflective membrane behind their retinas. The membrane is a unique adaptation to help their ability to see at night.

You’d need more information about an animal in addition to its eyeshine, such as habitat, size, behavior, eye size, and more to identify it accurately.

I hope this article has provided the info you needed. Thanks for reading!

Our ancestors would usually make a bow from whatever wood they had at hand. However, with time they started to recognize that certain types were superior to others. The good news is that no matter...

Continue Reading
link to When Is the Best Time to Buy Ammo? | What You Need to Know

When it comes to ammo, figuring out where and what to buy can be an overwhelming endeavor. Beyond price and type, when to buy can be equally important. As with any other product, market forces can...