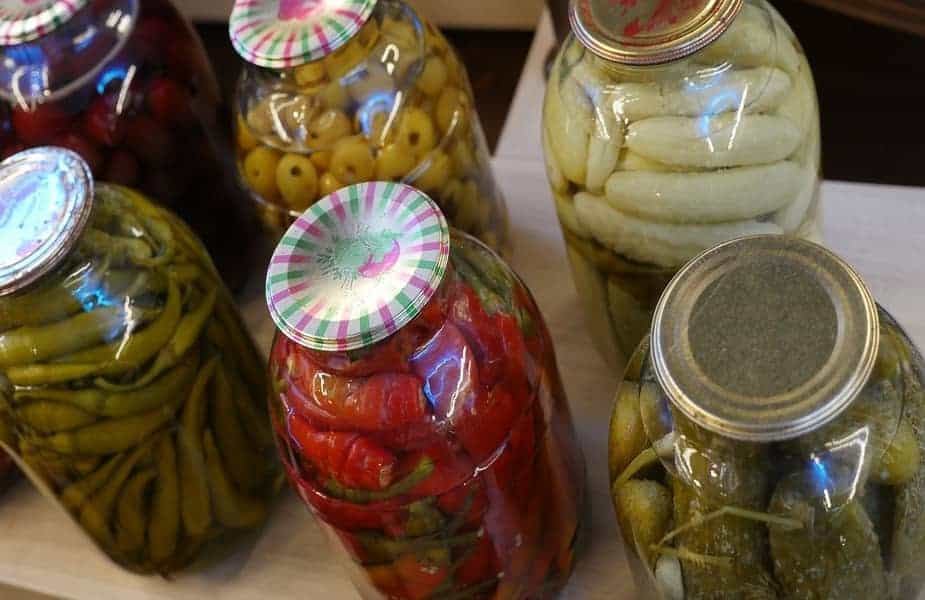 The question of whether pickling and fermentation are the same thing or whether there is a difference is a common question that I hear. While we all know that both are methods used to preserve food, the exact process is a bit complicated. So, I did quite a bit of research and was able to discover the answer.

Another difference is that humans have been using fermentation since the Neolithic age to preserve food and make beer, whereas pickling is also an ancient process, but only really became widely popular around the 17th century. Both methods are prevalent in modern society as many cultures enjoy the taste of pickled and fermented foods. Read on for more details.

What Exactly Is Pickling?

The process of pickling employs an acidic liquid medium to preserve the food. By lowering the pH to 4.6 or below, you create an environment that is inhospitable for bacteria to grow. By eliminating bacteria, you will stall the natural decaying process of the food. Heat is also a common component of pickling, as it will eliminate the microorganisms that can survive at a low pH in the food, prolonging the preservation of your pickled products.

A common way to pickle is to bring a mixture of vinegar, water, and salt (you can add herbs and spices to taste) to the boil and then pour it over your fruit or vegetables. Seal the mixture in a mason jar and leave it to marinate for a few hours to a couple of days in the fridge before consuming. The longer you leave it prior to eating, the more intense the flavor will be.

There are tricks to pickling successfully, including not overheating your vinegar mixture, the water to vinegar ratio, and the condition of your food prior to pickling. Get these wrong and your food may be mushy, lack flavor and/or nutrients. However, despite these pitfalls, the food will be fine for consumption unless you detect bubbles in your jar. In that case, your pickled food most likely contains bacteria and is probably spoiled.

What Exactly Is Fermentation?

Fermentation is the metabolic process of converting carbohydrates (sugars) to alcohol or organic acids, using enzymes in anaerobic conditions. It is a similar process to pickling, as this can be achieved by covering the food in salt and water (also known as brine).

An important distinction to pickling is that no additional acid is added to the fermentation solution.

The fermentation process will produce gases (mainly carbon dioxide), which is why traditionally jars were covered in cloth rather than tightly sealed to allow the gas to escape. In these modern times, you can buy fermentation jars with specially made lids that allow the gases to vent, but no additional air to enter. By doing so, you will prevent mold forming on top of the fermented product.

The combination of salt and lack of oxygen inhibits the growth of bad bacteria (e.g., Ecoli) while allowing the good bacteria like Lactobacilli to feast on the sugars in the food. In the fermentation of foodstuffs like fruits, vegetables, and yogurt, these sugars are converted into lactic acid and carbon dioxide, which will have the same effect as pickling on the preservation of the food by lowering the pH slowly.

The biological change in the food is what produces the signature fermented flavor and this transformation can take up to ten days to complete. This process is widely used in the food industry to create foods like pepperoni, kefir (from milk), kombucha (from tea), and tomato ketchup.

Provided you keep the food fully submerged in liquid, the jar vented, and store it in a cool, dry environment, there is no reason why the fermentation reaction will not occur. Do note, you need to buy organic vegetables for fermentation, as pesticides can inhibit the growth of Lactobacilli. If your fermentation process isn’t working, you can buy starter bacteria to add to your brine to ignite the reaction.

Probiotics: The Main Difference Between Pickling and Fermentation

While both pickling and fermentation offer preservation and great tasting foodstuffs, fermentation is a far superior method in terms of health benefits. The bacteria used to preserve the food (e.g., Lactobacilli paracasei and Bifidobacteria) are also probiotics. These don’t exist in pickled foods as the acidic content and heat kill these bacteria before they can thrive.

Probiotics are microorganisms that enhance or restore your natural gut flora. By consuming these live bacteria, it has been proven that the human gut can process food more completely. This has knock-on effects including reducing inflammatory bowel syndrome and inflammatory bowel disease (an autoimmune disorder). The latter indicates an overall improvement in the immune response and a reduction in inflammation.

Studies have shown further wide-ranging health benefits have been demonstrated. Probiotics have improved mental health, specifically in the treatment of depression, while diabetics have seen their HbA1c levels and glycemic control improve.

With such a vast array of evidence, probiotics, like these supplements found on Amazon, are something every individual should consider incorporating into their diet. If you purchase fermented foods instead of preparing them at home, check the packaging to be sure you are getting live bacteria. Any product that states it has been heat-treated will not have any probiotic qualities as the heat will have annihilated the good bacteria.

Pickling and fermentation are words synonymous with methods of preserving food that produces a sour flavor. While elements of their processes overlap, they are, however, two distinct categories of food preparation. The interchangeability of these terms usually arises because pickling often uses vinegar, which produced via fermentation. Additionally, some fermentation processes produce acid, meaning these fermented foods are also classified as pickled.

Even so, these terms are often used interchangeably. There is a good reason for this, as both processes use acidic environments to alter the flavor, texture, and color of the food. Food like sauerkraut, which often is both pickled and fermented, only adds to the confusion. An important distinction though is that fermentation uses bacteria, and with it, you will be consuming probiotics that can have numerous health benefits.

Are pickles fermented? Confusingly, sometimes yes! The term pickle actually comes from Dutch pekel or northern German pókel, which means salt or brine. It has nothing to do with a pickled cucumber (termed a gherkin in the U.K., Australia, New Zealand, etc). Some pickles, like the dill pickle, often get their flavor through the lacto-fermentation process.

Can you eat too much fermented food at once? As with any alteration in diet, suddenly eating a lot of one type of food can have some short term consequences. The same applies to consuming more fermented foods than you are used to. It is possible you may initially suffer from increased gas production (bloating) as your digestive tract equilibrates to the increase in bacteria. This is most likely to occur with fiber-rich fermented foods like sauerkraut or kimchi.