I’ve been a canner for more than 50 years now, and during those years, I’ve used all of the more familiar methods of food preservation. I preserve food by canning quite often which includes making jams and jellies, canning fruits and vegetables, and I even can beef stew from time to time. I grow herbs and peppers and dry them to make some of my own seasonings, I freeze a lot of fresh fruits and vegetables, and I often make pickles and pickled beets.

Common questions that I get: What is the difference between pickling and canning? Can you make pickles without canning? Just how are the two processes related?

Both pickling and canning are methods of preserving food for use at a later time.

This article will explain these processes in greater detail.

What Are Pickling and Canning and How Do They Work?

According to Wikipedia, pickling is “The process of preserving or extending the shelf life of food by either anaerobic fermentation in brine or immersion in vinegar.” Both methods are considered pickling, but there are distinct differences in the processes used to make the pickled products.

Anaerobic fermentation is the process used in making things like sauerkraut. But just how does fermentation preserve food? To simplify this very complex process, vegetables are salted and put into a container that is oxygen-free. This salty, oxygen-free environment is conducive to the growth of lactic acid which is beneficial to humans. The bacteria that create lactic acid also prevent the growth of harmful microorganisms, and through this process preserves the food and renders it safe for a certain period of time.

Sauerkraut will stay good 4 to 6 months after opening if kept under refrigeration. However, canning fermented vegetables like sauerkraut will render them safe to eat for 3 to 5 years if stored properly.

The basic steps of the anaerobic fermentation process are found in this recipe for sauerkraut.

Sauerkraut Made by Anaerobic Fermentation

How Do I Can Sauerkraut?

Sauerkraut can be boiling water bath canned by using one of two methods, hot packed or cold packed.

For detailed information on making sauerkraut, take a look at National Center for Home Food Preservation | How Do I? Ferment.

Pickling By Immersion in Vinegar

The pickling process that involves immersion in vinegar is the method used most often in making pickles from cucumbers and other foods. Vegetables are the foods most often pickled, but other food products such as eggs, herring, shellfish, bologna, and pigs feet are also preserved by pickling.

How Do You Make Pickles From Cucumbers By Immersion in Vinegar?

There are many different recipes and methods of making cucumber pickles, but here is my favorite recipe, which is the recipe found on the package of Mrs. Wages Pickling Lime. The pickles made by this recipe have the best taste and are the crispest of any recipe I have tried. The link above will take you straight to Mrs. Wages’ recipe, but I have also provided the recipe for you here for your convenience. If you prefer, I show detailed information on each step of this recipe in my YouTube video Learn to Make Crunchy Sweet Pickles – Canning Recipe (Full Process Step-by-Step). 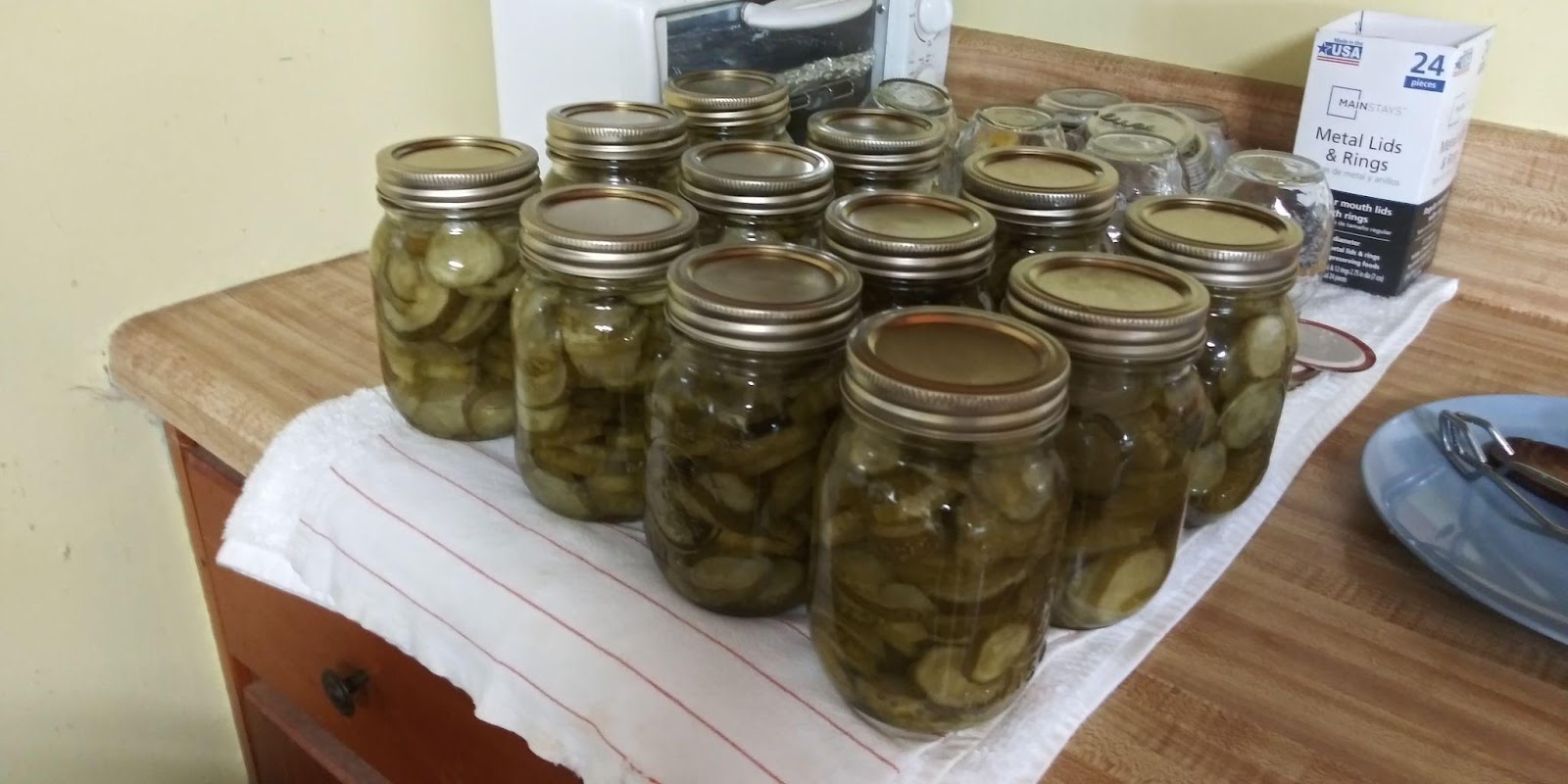 Canning is the process of preserving food at home for use at a later time by using one of two processes, (1) pressure canning, and (2) water bath canning. The type of canning that is needed depends on the foods you are canning. Both methods are described below.

But, how do these methods work? According to the USDA, “These practices remove oxygen; destroy enzymes; prevent the growth of undesirable bacteria, yeasts, and molds; and help form a high vacuum in jars. A good vacuum forms a tight seal which keeps liquid in and air and microorganisms out.”

Pressure canning is the method that is safe for and must be used when canning all low-acid foods with a pH of more than 4.6. This means that all vegetables, meats, poultry, and seafood must be pressure canned to make them shelf stable and safe to eat. This is the only method that renders these foods safe and not in danger of containing the bacteria that cause botulism.

For more detailed information on the canning process and a more comprehensive list of foods that must be pressure canned, see my article entitled “List of Low and High Acid Foods For Canning (With Chart).” And, if you would like to see the step-by-step process of pressure canning, take a look at my video entitled “Pressure Canning Mustard Greens Step By Step From Garden to Jar.”

Water bath canning is the method used for canning foods with a pH of less than 4.6 which are known as high-acid foods. This process involves bringing the canning jar and the complete contents of the jar to the boiling point (212℉) and maintaining that temperature for a specific length of time in order to kill the bacteria that are found in these high-acid foods and to render the jars airtight, making the food shelf stable for several years when stored properly.

This YouTube video breaks down and explains each of the steps involved in boiling water bath canning.

But, How Are Pickling and Canning Related?

Pickling and canning are related because both are methods of preserving foods for use at a later time, but they are also related because, although foods are preserved by pickling and will last longer than the cucumbers and other vegetables and foods they are made from, they must be consumed more quickly than canned foods or either refrigerated so that they will last for a longer time.

But, they can also be made shelf-stable so that they last for years by utilizing the canning process. In this way, we realize that while pickling and canning are different processes, they are related or at least intertwined because pickled foods must also be canned for long-term storage.

What Are Other Methods of Food Preservation?

Since the beginning of time, man has been searching for ways to preserve the food that they have so they can use it to feed themselves and their families during times when food is scarce. Over time, many methods have been discovered, perfected, and used until the next best method was found.

There are eight main methods of food preservation: (1) Drying, (2) Pickling, (3) Canning, (4) Freezing, (5) Root Cellar storage, (6) Freeze Drying, (7) Salt Curing, (8) Smoking, plus several other lesser-known methods. This article mainly focuses on pickling and canning, but will mention some of the other ways to preserve food.

Research and knowledge of history tells us that the first humans used the only method of food preservation available to them which was drying. They used the sun to dry their foods so that they would last until the time when fresh food was no longer available and the dried food was needed to sustain them through the winter or at least until they found more food.

Evidence has shown that cultures in oriental and middle eastern countries as far back as 12,000 B.C. were drying their foods as a method of preservation. Sun-drying was used to dry foods until the Middle Ages when Europeans living in areas that are cooler and wetter with a limited number of sunny days started building what they called “stillhouses” that were the first dehydrators for drying foods. They hung the food in the buildings and built fires inside the buildings to dry it.

Sun-drying and drying with fire were used then until the mid-1800s when French inventors invented a process to dry vegetables by using hot air to heat the food to 105℉ and then pressing it into dried vegetable cakes. That doesn’t necessarily sound very tasty, but when you need to preserve food, you have to use any means available to you.

Since the 1960s, however, there has been a resurgence of interest in dried foods and efficient dehydrators were developed for commercial as well as home use. The latest rage in food preparation, the air fryer, can be used as a food dehydrator that is both efficient and easy to use.

Freezing food as a preservation method has also been around for a long time. As a matter of fact, the Chinese used freezing as a method of preserving food as far back as 3,000 B.C. They built and used ice cellars to preserve their food through the winters. The Romans also had a method of freezing food to preserve it by building insulated cellars and storing their food in compressed snow.

But, to a person like me who grew up in the southern part of the United States which rarely sees snow, freezing is a more recent method of food preservation. As far back as I can remember, which is around 1950, we always had a refrigerator with a small freezer built in. However, at the time I was born, my family had an ice box and bought ice from the ice man who made his rounds every day to sell the ice needed to keep food cold, but not frozen.

Even though there were commercial freezers as early as 1861 in Sydney, Australia, refrigerators for the home with separate freezer units were not invented until the 1940s and were not a common thing until at least the 1950s. Separate self-contained freezers for home food storage were also invented in the 1940s and 1950s but were not as popular as the refrigerator. By the 1970s, home freezers were catching on and were becoming a more commonplace appliance, at least for families who could afford them.

I remember back in the late 1950s and early 1960s, my sister rented a food locker at the local ice house where she could store some frozen food, but the locker was small and wouldn’t hold very much food. I personally did not own a home freezer until the 1970s.

Freezing foods, however, is now one of the easiest and fastest methods of preserving food because the process that you must follow to freeze vegetables, for example, is to blanch them, cool them down quickly, and put them into freezer bags or boxes and store them in the freezer.

Fruits and berries are even easier because they do not require cooking and can be put into the freezer raw, as long as they are prepared in advance for the way they will be used. For example, if you are freezing peaches that will be used to make jam, they must be peeled, the cores removed, and cut into the size pieces you will need to make the jam.

How Do You Blanch Vegetables For Freezing?

Blanching food for freezing is a simple process that involves these steps:

Salt curing and smoking are primarily used for meat and fish, including ham, salami, and summer sausage, and are both methods of food preservation that were used by our ancestors. When my parents were growing up in the early 1900s, their meat primarily consisted of fresh or canned meat during the summer and meat cured in their smokehouse during the winter.

Whichever method or methods you prefer to utilize when preserving food for your family’s use, there are many methods available that will provide a variety of different kinds of food and that allow us to feed our family their favorite dishes all year round.

For more, don’t miss Is Pickling and Fermentation the Same Thing?

Hi, I’m Anne but my grandchildren call me Jelly Grandma. I have over 50 years of experience as a Southern cook and am a retired librarian. I love sharing what I have learned. You can find me on YouTube as well! Just click the link at the bottom of your page.

I hope your visit here has been a sweet one.