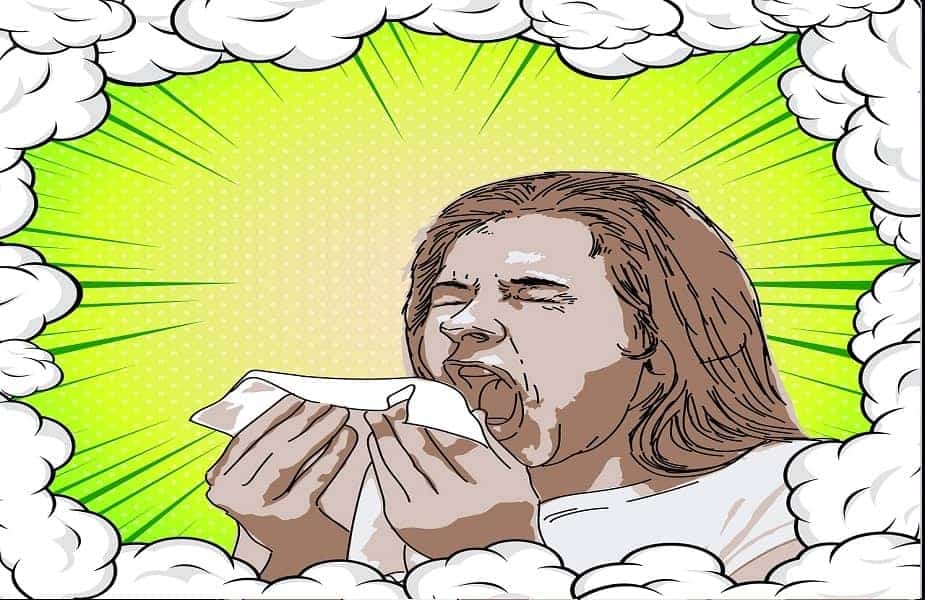 Direct sunlight has always caused me to sneeze uncontrollably. For my entire life, I wondered if I was alone in my sun-sneezing “burden” until one of my children let loose with the biggest sneeze in the history of infancy the first time I took her outdoors. It was then that I knew it wasn’t just me. So I did some research and this is what I found out.

Sneezing that is induced by sunlight is known as photic sneeze reflex (PSR) or “ACHOO” syndrome. While the exact cause is unknown, PSR is known to be hereditary and occurs in somewhere between 18 and 35 percent of people. PSR has been known to cause danger to pilots or even automobile drivers.

While the cause of sun-sneezing continues to be a mystery to scientists, there are a few things that are known. For more detailed information, please read on.

What Is Known About the Cause of Sneezing in Sunlight?

To scientists, there are two terms for reflexive sneezing. Photic sneeze reflex or PSR is the most common term but the condition is also called autosomal dominant compulsive helio-ophthalmic outbursts of sneezing (ACHOO).

For nearly three decades PSR has been known to be genetic. People with the condition have been induced into sneezing reflexively while either emerging from darkness or dim light into sunlight. It also sometimes occurs in someone who is outside simply by turning their face toward the sun.

Since photic sneezing is not a chronic condition, not a whole lot of study has been done by scientists. In fact, the genetic basis of PSR remains unclear as the genes that cause the condition have not been isolated. Even so, the fact that it occurs within families definitely suggests that the trait is heritable.

While the exact cause of photic sneezing is unknown, there are a couple of theories:

To summarize this scientific lingo, a normal sneeze is caused by the irritation of the nasal cavity. In people with photic sneeze reflex, light somehow is either misinterpreted by the brain or causes a possible accidental stimulation of neurons nearby, somehow affecting the ones that interpret bright light.

How Many Times Do People with Photic Sneezing Normally Sneeze?

The number of sneezes that a person will have during an episode is usually constant for a person and is usually either two or three times. However, bursts of up to 10 sneezes have been known to occur in some individuals. Interestingly, most PSR episodes only happen once a day. Many individuals seem to be immune to having it happen again until the next day.

Does One Group of People Sneeze More Than Others?

Approximately 67% of photic sneezers are female and 94% are Caucasian. Also, people with deviated nasal septums are much more likely to have PSR.

While there definitely appears to be a hereditary component, studies show that photic sneezing is actually much more likely to be acquired. In other words, you are much more likely to get ACHOO syndrome by getting hit in the face than you are by inheriting it.

Not much research has been devoted to finding a cure or treatment for PSR. However, some recent studies have shown that antihistamines may reduce the occurrence of photic sneezing. Otherwise, there really is no definitive treatment for PSR

There is some anecdotal evidence that simply shielding your eyes or wearing some kind of face protection when going out in direct sunlight might help (think scarves or a hat). Personally, sneezing never really bothers me enough to worry about trying to stop one. I am one of those weird people that find sneezes exhilarating.

Is Sneezing After Eating Related to Photic Sneeze Reflex?

Save for chocolate, sneezing after eating caused by the same thing as photic sneezing. Instead, it’s more like to be due to something called gustatory rhinitis. This is nothing more than an irritation to the nasal passages that is triggered by something you ate.

The most common foods that trigger gustatory rhinitis are usually spicy foods such as:

Rhinitis has no cure and, like photic sneezing, is almost never leads to any type of health problem. If you dislike sneezing after eating, simply figure out your trigger foods and avoid eating them around people who don’t want to be slimed.

Why Do Needles Around the Eye Area Cause Sneezing?

Some medical procedures require an injection near the eye. Even sedated patients have been known to uncontrollably sneeze during insertion of the needle. While the exact cause of this phenomenon is unknown, it is believed that the triggers are identical to that of photic sneezers.

If you are a photic sneezer then it is probably best that you tell your health care providers about your condition so that they can take the necessary precautions when holding needles around your eyeballs.

Does a Baby Who Sneezes in Sunlight Sometimes Grow out of It?

Photic sneeze x appears to be a phenomenon that is permanent. Whether inherited or not, it is likely that once a sun sneezer, always a sun sneezer.

The good news is that as far as medical afflictions, photic sneezing is about as mild as they come and not something to be concerned about.

How Do I Stop a Sneeze?

It is not recommended that anyone should ever try to stop a sneeze. Wind speeds of around 100 miles per hour rush through your nasal passages during a sneeze. Trying to stop it can be painful and maybe even damage your ear passages.

Even so, maybe there is a time where sneezing or not sneezing can mean life or death. Let’s say you are in a hiding spot and a madman with a chainsaw has just entered your house. Here are some ways you attempt to stifle a sneeze:

What Are Some Other Common Causes of Sneezing

Photic sneezing is one of the more rare causes of sneezing in people. Even so, here are a few things that trigger a mad dash to a tissue box:

Besides the sun, things that personally make me sneeze is cat dander. Put me in the same room as an unknown feline and within minutes my eyes will start itching and I will sneeze like I just snorted up a line of black pepper off the counter with a straw.

ACHOO syndrome has been around for a long time and periodically documented over the past couple of thousand years. The earliest recorded observation of the phenomenon was around 350BC by Aristotle.

Somewhat comically, it was listed in his “Book of Problems.” In it he asked, “Why does the heat of the sun provoke sneezing?.” His answer was that sweating occurred inside the nose and that is what caused people to sneeze.

We haven’t really come much further in our understanding of photic sneezes since Sir Francis Bacon in the . He believed that the eyes were the culprit. According to modern science, he was on the right track. However, he thought it was due to the yes watering and not because his nerves were affected.

Today’s notion about the exact cause was proposed back in 1964 by a man named Henry Everett. He once again thought it had something to do light and the eyes except he made the connection to the nervous system being the true cause.

Why do sneezes feel good? While not much research has been done on the subject, there is some evidence that endorphins may be released into the body during or after a sneeze. The other explanation is that the good feeling is caused by muscle tension in your chest being released during a sneeze. The pressure being released tends to feel good no matter the cause of the release.

Can you die from sneezing? You cannot die from sneezing. However, a sneeze has been known to be a trigger for a fatal medical incident in people who were already in bad health. Otherwise, the only other danger from sneezing lies in doing so while driving or flying a plane and wrecking as a result.

Why does chocolate make some people sneeze? While it is not known why, it has been medically confirmed that, in some people, sneezing can be caused by eating chocolate. Interestingly, the darker the chocolate, the more likely the sneeze is to be triggered. It is believed that chocolate causes the same reflex that is found is photic sneezers.

More About My Sun-Sneeze “Affliction”

I grew up in Florida and as a child remember one constant variable to my daily routine. Each afternoon I would venture outside into the sunlight and, within a few seconds, my existence would be announced to the neighborhood. Without fail, two unfettered sneezes would unfailingly erupt and become the center of my existence for a couple of seconds. Every time, it would always be two sneezes; never one, never three, always two

I always found my little sneezing bouts intriguing but never really gave it too much thought. It wasn’t until recently, some 40 years after I first became aware of my photic sneezing, that I learned that it only affected a small portion of the population.

was researching ways of reducing allergens in my home when I came across an article about ACHOO syndrome. The curiosity aroused that day is what led me to research and write this post.

If you are a photic sneezer or know someone that is, please be sure to comment and let me know about your experience. Members of the “Sun-Sneezers Society” must stick together.

link to Can You Use Baking Flour for Frying? | With 8 Alternatives

Continue Reading
link to Are Mint Leaves Edible and Is It Safe to Eat Them?

Mint, or mentha as it is sometimes referred to, is a very popular herb that can be consumed fresh or dried in many types of dishes and infusions. People have used them for various purposes for...