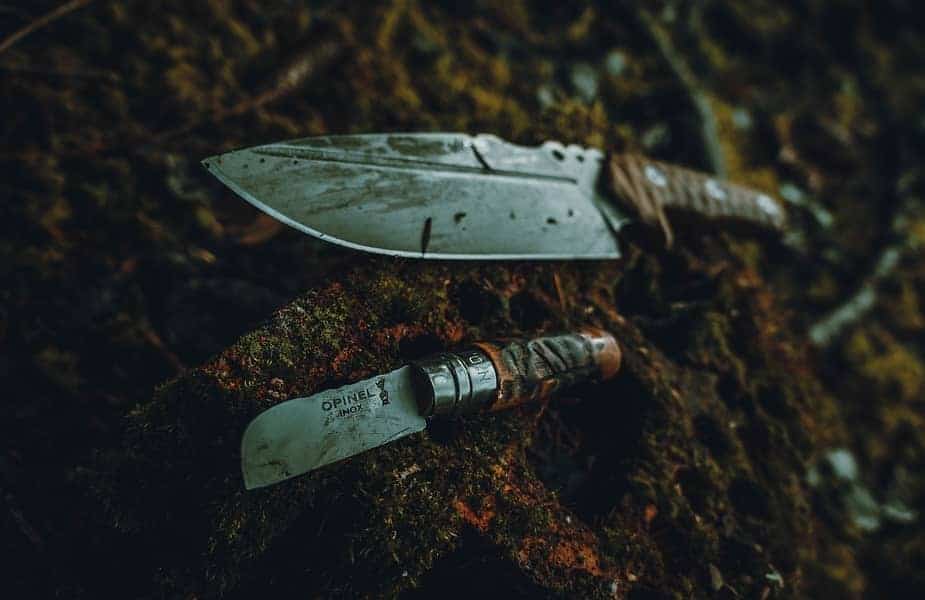 Several knife grinds are available on the market, and the major ones include convex, flat, scandi, saber, and hollow. However, for bushcraft, it is often a choice between scandi and convex. As such, people new to bushcraft often wonder which of these grinds are better.

The convex grind is better for bushcraft for its famed durability, excellent edge retention, and cutting efficiency. Although it is not as easily sharpened as the scandi grind, it performs better at most bushcraft chores. Woodwork is perhaps the only task at which the scandi grind outshines convex.

In supporting the claim of convex being better, this article presents an overview of both types of grinds, the grind properties, and how well each performs at typical bushcraft chores that require the use of a knife.

The grind of a knife refers to the blade’s vertical cross-sectional shape and how the metal was thinned to reveal the cutting edge. The grind can impact the knife’s ability to cut, durability, and how often it will need sharpening.

Knives are a staple tool for bushcraft, as they are used for several tasks. Consequently, the ideal knife is one with a blade that will perform satisfactorily on all fronts. Due to the convex and scandi grinds’ geometry, these two are considered the most appropriate for bushcraft.

Commonly referred to as scandi, this grind is found mostly in Scandinavian knives like the Puukko and Mora, used for woodwork and general utility.

The scandi is a short flat grind, with a V shape. Much of the blade has the same thickness as the spine, as tapering only begins around the lower quarter of the blade, and extends to the cutting edge without a secondary bevel.

As such, a wedge is formed close to the cutting edge, where the tapering begins. Knives with a scandi grind are easy to sharpen as you can use the pronounced slope as a guide for the flat stone.

Also known as a Moran grind, a convex grind is one that arcs down into the cutting edge as a convex curve. The grind maintains much of the spine thickness throughout, and this reinforces the cutting edge, making it stronger while retaining a degree of sharpness.

The convex curve of the grind is achieved by pressing the steel against a slack belt grinder. Consequently, convex grinds can be challenging to sharpen due to the curvature.

The Better Grind for Bushcraft

In determining which of the grinds is better for bushcraft, both will be considered based on the grind’s properties and how they perform at typical bushcraft tasks.

Bushcraft craft is an outdoor activity and can be demanding on the individual and equipment alike. As such, the blade should have a grind that is durable, able to cut, retain an edge, and easy to sharpen.

The primary job of a bushcraft blade is to cut; its ability to cut outweighs other factors like ergonomics or type of steel.

The scandi, due to its single bevel and zero grind, has an excellent cutting ability, as there is no change in the angle that can cause friction. However, the wedge created by the intersecting planes hampers the blade when cutting into thick materials.

On the other hand, the smooth downward arc of a convex grind offers little to no resistance and will cut both thin and thick materials. Thus, in terms of cutting efficiency, convex grinds are better.

Bushcraft demands more than what a delicate blade can give because the various ways that the knife will be used can take a toll on the blade.

Edge retention refers to the blade’s ability to remain sharp even after intense use. Edge retention is a critical property for bushcraft knives to have, as it might not always be convenient to sharpen the blade in the field. Also, frequent sharpening will eventually reduce blade steel.

The arc of a convex grind provides a smooth transition going up the bevel, but such a change is absent in tapered blades like scandi, as such, the scandi cannot retain an edge like the convex grind.

A dull knife is not useful for much, despite how durable it may be. Bushcraft knives should be easy to sharpen by hand, as there will be no specialized sharpening tools in the field.

The scandi grind is easily sharpened as the pronounced bevel serves as a guide for sharpening with a flat stone.

Convex grinds are difficult to sharpen by hand, as it is difficult to follow the curvature with a flat stone, it may be inadvertently reprofiled into a partial flat grind.

Bushcraft encompasses much, but the major knife tasks include:

Woodwork refers to the practice of making items out of wood. Bushcraft woodworking includes carving spoons and other utensils.

The wedge on the scandi grind acts like a chisel to deliver the more precise cuts needed for carving.

In comparison, the smooth arc of convex grinds does not offer the same precision. Thus as regards woodwork, the scandi trumps convex.

The wedge on the scandi impairs its ability to cut through dense objects like meat, as the blade soon gets stuck and will require more force. As such, foods like potatoes will crack rather than split cleanly, and skinning becomes laborious.

In place of a wedge, a convex grind has a smooth transition curve, which reduces friction and allows the blade to slice cleanly as food parts on either side of the edge. The curves also make skinning less tedious.

Again, the scandi fails at survival tasks like chopping wood for fires or shelter, as the wedge prevents the knife from making deep cuts, finding success only with softwoods like pine.

Convex grind is also called the ax grind, for its ability to part wood on either side of its curved edge without much resistance.

Both scandi and convex grinds excel at fire making as either one will produce flint from carving wood, or feather sticks with thin enough curls to start a fire. In this regard, the knife user’s skill plays a more crucial role than the grind type.

After comparing the two grinds, based on the general grind properties and performance at bushcraft chores, these are the results:

Thus, the convex having performed better in more areas is declared the better grind for bushcraft.

The nature of the scandi is particularly suited for woodwork and light cutting. Hence if woodworking is the primary chore, then the scandi grind will serve you better.