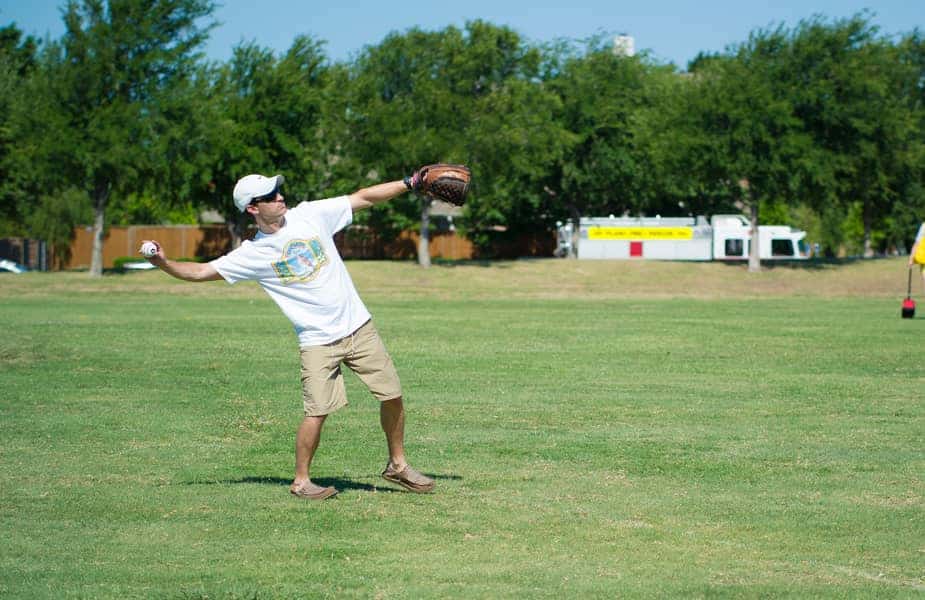 If you’re into baseball and understand pitching techniques, then you know how important fastball velocity is. A pitcher’s throwing speed can greatly affect their success on the mound, so how fast one can throw is a big deal.

Without significant practice, your average person would be lucky to throw a baseball over 50 mph. For trained players, the average pitching velocity ranges between 40-50 mph among young players around 9 or 10, between 55-75 mph between 10 and 17, to an average of 80 mph for 18-year-olds and above.

In this article, we’ll outline the average throwing velocities as per the different age groups. We’ll also look into the factors that influence pitching velocity as we discuss how you can increase your speed. Let’s jump in.

There isn’t one average pitching velocity that cuts across different age groups. It wouldn’t be fair to categorize an upper-level 20-something-year-old pitcher in the same velocity range with a Little Leaguer who’s barely reached puberty.

Age definitely plays a role in how fast one can throw a baseball. With this in mind, let’s look at the average fastball velocity as per different age groups:

On average, these little players’ throwing velocity ranges from 40 to 50 mph. With the average changeup speed at this age being approximately 10 mph slower, that means the average speed lies between 30-40 mph.

Kids between 13 and 14 years of age are usually just winding up their Little League experiences. Their average speed is 55 to 75 mph.

These are 14 to 18-year-olds. With such a wide age range, high school players are often subdivided into smaller groups.

Freshmen have a throwing speed closer to the 13 and 14-year olds above, while the older lot at 18-years of age can pitch at a speed of 75-95 mph. Sophomores are somewhere in between.

The changeup speed for high schoolers is about 10 or 15 mph slower, so generally, the pitching speed at this age lies between 60-75 mph.

Above 18 Years of Age

After 18 years, most pitchers have normally reached their maximum throwing velocity. But this is not to say they cannot increase their speed at all. It’s possible to still score higher numbers on the radar gun as one grows past their teenage years.

At college level and beyond, you will find players with up to 90 mph throwing speed.

Changeup at this age is about 15 mph slower. So on average, the pitching velocity for this age is the upper 70s.

As a player grows from childhood into teenage years and finally adulthood, their fastball changes. Most often, there’s an increase in pitching speed due to age and other factors (which we’ll be looking at next).

How to Increase Your Pitching Velocity

Pitching velocity is influenced by a complex mix of intrinsic physical factors, learned techniques, and exposure to throwing volumes. These influencers affect pitching speed individually, but their effects are also interdependent on each other.

So, are you ready to light up that radar gun with high-level speeds? Then read on for some of the most effective ways to increase your pitching velocity.

To be able to throw hard, you need to build your physical strength. Think of strength as the potential in you to generate power/ ability to throw harder. That means the more strength you have, the more power you can produce to pitch faster.

So how do you build strength? You have to work and sweat (pun intended) for it. Some weight lifting here and there during your workout sessions is inevitable. If you’re a beginner at this, then simply start off by using your own weight as you exercise.

Your aim should be to gradually expose your body to bigger loads to build even more strength.

Power is an important factor that influences pitching velocity. To generate power, you need a combination of force and velocity.

Force is basically the strength we’ve mentioned above, and speed here refers to your arm speed. Apply that force at an optimum speed in a given direction while using the best mechanics, and you’ll see your pitching velocity rising.

This, too, is something you can learn and develop through training and working out. It cannot happen overnight. You will need to put in the time to experience success.

Pitching mechanics refers to the actual techniques of throwing the baseball. The process of pitching a baseball is very intricate. It requires being aware of individual movements and positioning of specific body parts.

Proper mechanics will ensure efficient use of your strength to produce enough power to throw the baseball.

Here are some pointers for improving your mechanics:

For a clear and systematic breakdown of how to use these mechanics to pitch like a pro, check out this video:

The old saying is true; practice makes perfect. The more exposure you get to throwing the baseball, the more you learn and engrain the mechanics. This way, you get to optimize your pitching.

Getting frequent practice also results in your body, muscles, and joints properly adapting to the pitching maneuvers and leading to potentially greater velocities.

There are key joints that need to possess adequate mobility to implement effective pitching mechanics. Some of these joints are the throwing shoulder, hips and pelvis, and the thoracic spine.

Body weight gives a ballplayer more potential to produce force. In addition to that, more body weight creates a greater momentum toward the home plate.

Although body weight on its own is not sufficient to improve pitching ability, these two benefits are evidence that body weight plays an important role in effectively pitching and increasing throwing speed.

You’ll know you have muscle fatigue when your body experiences some soreness, which leads to pain in muscles. But sometimes the fatigue is not that obvious.

All the same, ballplayers should avoid exerting themselves to the point of muscular fatigue, especially if they have to play in the near future. This is because muscular fatigue results in a reflex reaction that inhibits certain movements that may worsen the soreness and pain. It’s as if the body shuts down some of its muscular functions to avoid further damage.

Now, if this happens when you are meant to pitch for an important game, you cannot pitch as effectively as you need to. That’s why it’s necessary to learn how your routines, training methods, and practice sessions impact your body. That way, you can avoid sessions or minimize exercises within a certain proximity to your next start.

In conclusion, the throwing speed of the average person depends on the age group they fall in.

It’s highly possible to increase one’s speed by working on the various influencers of pitching velocity. These include physical strength, power, mechanics, mobility, and body weight. Also, be sure to avoid muscular fatigue right before the time you need to perform your best.