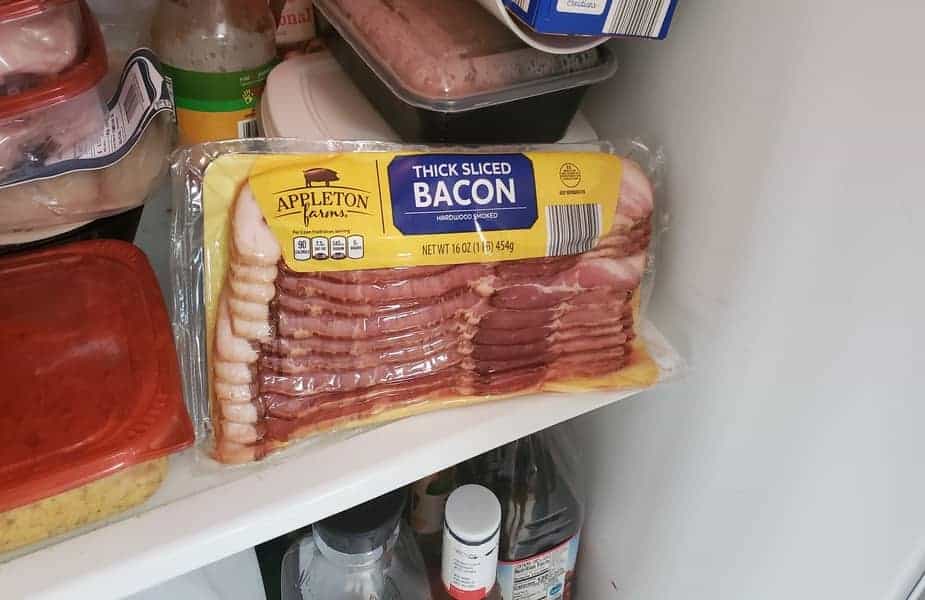 There’s no denying how enticing and delicious bacon is. Its salty, juicy, and scrumptious fatty taste holds quite a strong power over us. With our love for bacon, it can sometimes be tempting to want to keep them in the fridge. However, there’s a limit to how long bacon can stay fresh in the fridge.

Bacon can last anywhere from a few days to 1 month in the fridge, depending on its type and storage conditions. According to the U.S. Department of Agriculture, unopened bacon can last up to 2 weeks in the fridge when stored at or below 40°F (4°C). Once opened, bacon can only last for seven days.

The rest of this article will discuss in detail the life of bacon in the fridge. Questions about how long bacon lasts, how to tell if bacon has gone bad, and how to properly store bacon, will be answered comprehensively. If these are the answers you’re looking for, read on.

How Long Can Bacon Last?

However, when bacon is opened, it becomes a different story. Opened bacon can last in the fridge for just a week when stored at 40°F (4°C). So, if you won’t be able to consume it within that period, freeze it at 0°F (-18°C) instead.

Also, cooked bacon must be consumed within 4 to 5 days. If it’s shelf-stable precooked bacon purchased from the store, the USDA recommends using it within 5 to 14 days. You should also check the product package for specific refrigerating instructions by the manufacturer.

Avoid leaving raw bacon at room temperature as bacteria can rapidly grow between the temperatures of 40°F (4°C) and 140°F (60°C). If left outside the fridge for more than 2 hours, discard it. Also, it is not recommended to first partially cook bacon and refrigerate for future cooking. According to the USDA, partially cooking raw bacon may not completely kill off all the bacteria present in the meat.

How Long Does Cured Bacon Last?

Cured bacon will last for about 7 to 10 days in the fridge. Curing is used for preserving food such as meat or fish. Bacon is cured by adding salt and sodium nitrites. Most regular bacon products are cured bacon. The addition of sodium nitrites helps to prevent the growth of bacteria on the meat.

How Do You Know if Bacon Has Gone Bad?

Inadequate cooking, improper storage, and several other factors can cause bacon to go bad quickly. Spoiled bacon, when consumed, can cause bacterial infection and may result in food poisoning, diarrhea, headache, vomiting, fever, chest pain, and even death.

Thankfully, it is not so hard to identify bacon that’s no longer good for consumption. Changes in texture, smell, or color can indicate spoilage. Here are a few ways to tell if bacon has gone bad, rotten, or spoiled.

The first thing to do is to check the “use by” date on the package. If the expiry date has passed, the bacon should not be eaten. It is important not to confuse the “use by” date with the “sell by” date. The first is the manufacturer’s expiration date and should never be exceeded, and the second is the store’s guidance. Bacon can still be consumed seven days after the “sell by” date.

Judge by Its Smell

It’s pretty straightforward to know the state of bacon from its smell. Good bacon has a natural meaty smell, while bad or spoilt bacon will smell sour, weird, or rancid. If it’s cooked bacon, there may be a semblance of doubt as it can still smell delicious. However, it’s not worth risking it. Just throw it out.

More often than not, you’ll be able to tell if bacon is bad from its look. Fresh bacon has a naturally bright and pinkish color with white or pale-yellow fat. If this color has changed to grey or brown, it’s best to throw it away. You may also notice green dots or moldy flecks around it. These signs indicate that the bacon is bad.

If your bacon feels slimy or sticky to the touch rather than soft and moist, it’s no longer safe to eat. The formation of slime and sheen is caused by lactic acid bacteria. It’s best to throw it out immediately before other food items in your fridge and kitchen become contaminated. Wrap it well in a plastic bag and dispose of it in the garbage bin outdoors.

Discard It if in Doubt

If you’re unsure about the state of your bacon after checking its color, texture, and smell, it’s best to throw it out. Even if it appears okay, it’s not worth the risk. As the old rule says, when in doubt, throw it out.

How to Properly Store Bacon

Storing bacon properly helps to maximize its shelf life and preserve its quality and nutritional value for longer. Proper storage also helps to prevent foodborne illnesses and reduce food waste. Here are some storage methods you can use if you decide to stock up on bacon.

How to Store Raw Bacon

You can wrap raw bacon in its original packaging if it is resealable. An airtight aluminum foil, freezer paper, or plastic wrap can also help to maximize its freshness when refrigerating or freezing. To prevent freezer burn, you can further place it in a heavy-duty freezer bag.

How to Store Cooked Bacon

Cooked bacon must be wrapped in an airtight container (Click to see Amazon example) before storing it. To properly store cooked bacon, separate it into individual parts, and wrap them in paper towels. Slab bacon can be refrigerated in heavy-duty aluminum foil or plastic wrap, but should not be frozen as the fat can turn rancid very quickly.

Several factors determine how long bacon will last in the fridge, including what type it is and how it is stored. The USDA guidelines say that unopened bacon can last for 1 to 2 weeks in the fridge, while bacon that has been opened can last for just seven days. Cooked bacon must be consumed within 4 to 5 days.

You can easily identify bad or spoiled bacon through its expiry date, smell, color, and texture. If you’re having doubts about its condition, it’s best to discard it.

Also, storing raw or cooked bacon in airtight or resealable containers can help you maximize the shelf life of bacon and preserve its quality. You can use a freezer paper, plastic wrap, or an aluminum foil to wrap bacon before refrigerating or freezing it.