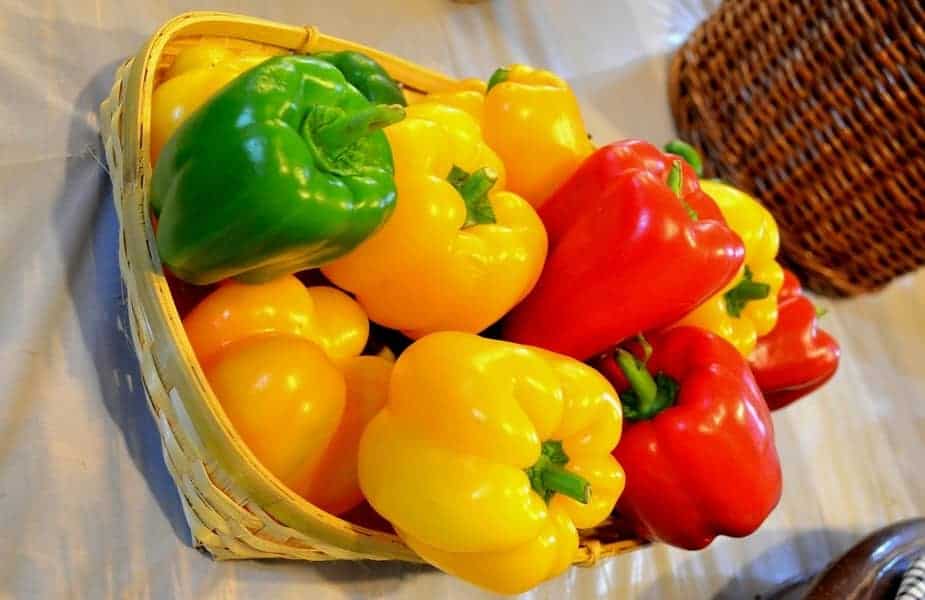 When it comes to bell peppers or any vegetables, fresher is better when it comes to consuming them. But do they really need to be refrigerated, or are they like fruits that can be left out? This is a common question people ask, so here is the answer.

Whole raw bell peppers will last approximately 4 to 5 days without refrigeration. Once cut up, the USDA states that unrefrigerated vegetables should be thrown out after 2 hours and that “perishable produce,” like peppers, should be refrigerated.

There’s nothing wrong with storing bell peppers outside the fridge unless you don’t intend to use them fairly quickly. Bear in mind that the ambient room temperature will cause your bell pepper to wilt, get soft, and become unappealing to consume.

Bottom Line: Due to their limited shelf life at room temperature, it’s much better to keep bell peppers in the fridge.

How Long Can Bell Peppers Last Out of the Fridge?

Once you take a bell pepper out of the fridge, it can last for several days. Once again, you don’t want to allow bell peppers to sit out for too long since they’ll wilt.

In fact, I recommend that any bell pepper is prepared within hours of being taken out of a fridge. This is, so you get the maximum amount of viable vitamin C and flavor that comes from select types of bell peppers. Otherwise, please keep them in the fridge or root cellar.

If left out, the skin starts to become soft and not as firm as before fairly quickly. And, in hotter climates, this process is accelerated. If the storage area is over 77°F, simply don’t store any vegetables there. They will go bad way too quickly.

Where Should Bell Peppers Be Stored at Room Temperature?

The best place to store whole bell peppers is in a cooler area of your kitchen. While the optimal temperature is 45 to 55°F, 68 to 77°F is adequate for up to 5 days, depending on how ripe the pepper was before you started storing it there.

Many people keep vegetables in a cellar or basement where the room temperature is lower than the rest of your home. This can extend the time they will last without using conventional refrigeration. This method has worked for centuries and can work for you too, as long as you don’t have a moisture problem.

Just keep in mind that cut up bell peppers should never be stored for very long without refrigeration. Once you slice or dice them, keep them in an airtight container, ideally in the fridge at 45 to 55°F.

How Long Will Bell Peppers Last in the Fridge?

Color matters when it comes to how long whole bell peppers last in the fridge. Green peppers (the dark green kind) last up to 2-3 weeks. Red, orange (California variety), and yellow will last 1-2 weeks. Sliced bell peppers in airtight storage will last you about 2-3 days.

Sliced peppers do not last as long because the cell structure that’s sliced open breaks down faster.

How to Store Bell Peppers Properly

Bell peppers should be kept in the fridge or a cool, dry area until you’re ready to use them. If you don’t have room in your fridge, then your basement or cellar is good. If you don’t have a dedicated storage bin, a dry cardboard box works just fine. Peppers can last up to a week in these conditions without a problem.

Of course, the fridge is always a safer bet if you have a lettuce crisper or vegetable storage.

Fresh whole bell peppers can be frozen, but you need to look for soft spots first. Wash, dry, and trim off any brown spots off them. It’s best to store peppers in freezer bags with excess air removed. The lowest point of the freezer is generally best since this is usually the coldest area.

How to Best Store Bell Peppers in the Freezer?

Chopped or whole bell peppers can be vacuum sealed and stored nicely at the bottom or back-end of the freezer. Once you freeze them, it’s recommended to use them within 6 months to avoid freezer burn. Once you unthaw them, they won’t be so crisp but are suitable for soups, stir fry dishes, or casseroles.

Can You Freeze Cooked Bell Peppers?

Cooked bell peppers can be stored in the freezer. Just allow them to cool-off off before placing them inside an airtight container or freezer bag. Vacuum sealing, to get rid of excess air, is a good option. Cooked peppers will last up to 6 months or more with no problem after being defrosted.

How to Store Bell Peppers for Stuffed Peppers

Prepping bell peppers in advance is not typically something that should be done. However, if it’s only a few hours ahead, this is how you do it:

It is not recommended that you stuff the peppers in advance as it can become a big wilted and soggy mess. This is definitely something where fresh is best.

How Do You Know When a Bell Pepper Has Gone Bad?

When a bell pepper’s outer skin gets soft and has a slimy appearance, this is a sure sign that it is spoiled and now rotting. Once a pepper is in this state, throw it in the trash or compost bin.

Can You Get Sick From Eating Old Bell Peppers?

You can definitely get sick from eating old bell peppers as they aren’t immune from bacteria and mold growth. However, rotten or spoiled vegetables aren’t likely to make you dangerously sick just because of the state they are in.

In fact, the pathogens like E. Coli and Giardia have no taste or smell and are not visible to the human eye. You can get sick from these organisms, whether the food is rotten or pristine.

Just the same, eating food well past its prime is not something you want to do. It isn’t worth the risk and, besides, the taste will be horrible.

The wrinkled skin on the outside of bell peppers is unattractive but is still technically edible. In fact, they can be perfect for adding to dishes such as stir fry or making something like an omelet since they will be very ripe and often have a stronger bell pepper taste. However, if the skin is soft or slimy, don’t eat it. These are signs of serious rot.

Why Do Bell Peppers Get Brown Spots?

Brown spots on a bell pepper are usually caused by calcium deficiency known as blossom end rot. It can also be brought about from incorrect watering. If the plant drys out and then is overwatered to compensate, this can cause brown spots or full rotten areas on the pepper.

By the way, brown spots on bell peppers aren’t similar to the brown spots on a banana, as they don’t indicate ripeness. Of course, they usually aren’t dangerous to eat. What you can do is simply trim around these spots.

Once you pick or purchase a bell pepper, it begins breaking down immediately. The freshness clock is ticking. And while you can leave them sitting out for a few days, your taste buds and body will be much happier if you eat them sooner than later.

I recommend immediately chilling nearly all vegetables if you plan to consume them within a week. Otherwise, there’s nothing wrong with freezing them to eat in the offseason.