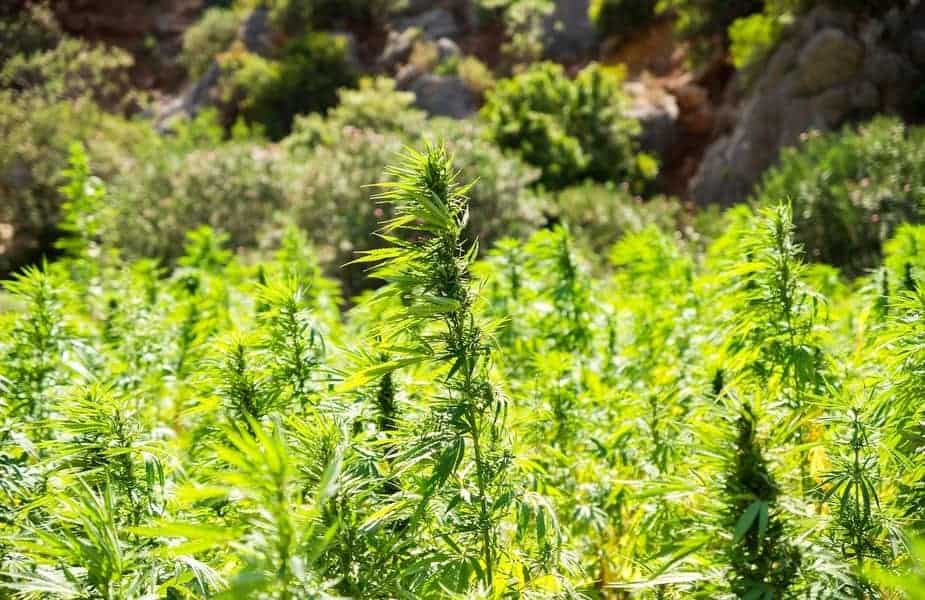 There is often a lot of confusion about the differences between hemp and marijuana and how to correctly identify each one. I recently saw some suspicious-looking plants growing in my neighborhood and was curious about what they are. So, I did some research, and this is what I found out.

Hemp is rigid structurally and grows up to 12 feet tall and are often much less bush-like than marijuana plants. Also, hemp has long, narrow leaves that generally look much skinnier than marijuana leaves. The leaves also gather in the upper area, making the bottom appear quite bare. When cut open, the stalk is hollow except at the tip or base.

Now, let’s go into greater detail on what hemp looks like. I’ll even touch on the chemical composition, how it is cultivated, and what the legality of the plant is.

What Are the Characteristics of a Hemp Plant?

Hemp, also known as industrial hemp, is a type of herb that completes its life cycle annually. Due to its shape and general form, it is often mistaken and used interchangeably with marijuana.

To set the record straight, they are entirely different types of plants but belong to the same species called Cannabis Sativa.

Here are the most notable characteristics of hemp:

Hemp is structurally rigid and can grow for up to 4 meters in height, depending on how it was cultivated. If you open up its stalks, you will notice that it is hollow just until you reach the tips or the base. It has the signature leaves shared among the other varieties under the umbrella of Cannabis Sativa species, like marijuana.

At first glance, hemp closely resembles marijuana due to them belonging from the same species of plant. However, if you look close enough, you will notice that hemp plants generally grow taller. It also has skinnier leaves that gather at its upper area, making the bottom bare.

If you take a whiff of hemp, you might notice that it smells like a pine forest, which depending on your stance on that description, can either make you love its smell or hate it.

Since hemp comes from the same species as marijuana, which is quite known for its chemical component called tetrahydrocannabinol (THC) that alter brain functions to get you “high,” it is understandable that you might think that it has that chemical component as well, which it actually does have.

However, the amount of THC found in hemp is significantly lower to the point of being negligible that probably nobody purposely cultivates hemp for the goal of extracting THC, which is the main reason why hemp typically only has industrial applications.

Are Hemp and Marijuana the Same Thing?

As stated in the characteristics of hemp plants above, hemp and marijuana are completely different types of plants with completely different usage. Their similarity ends with the species they belong to as well as their looks, which you can easily distinguish if you know what to look for.

The use of marijuana is also strictly controlled or outright banned in many countries due to its high amount of THC, whose harmful or positive effects are still being studied and debated even to this day.

In terms of cultivation, marijuana generally matures faster than hemp and outgrows it for more or less one month. Marijuana also requires more spacing than hemp in order to grow efficiently, which means that you can grow more hemp in the same space where you are growing marijuana.

What Is the Difference Between Hemp and CBD?

In the world of cannabis cultivation, many words and terms are practically turned around, which can easily confuse a complete beginner. One of the most frustrating kinds of terms are the acronyms. In this case, CBD, which is short for cannabidiol, is just one of almost 500 known compounds found in Cannabis Sativa plants, where both hemp and marijuana belongs.

Hence, you can simply think of CBD as one ingredient that makes up the hemp plant. In the case of hemp, it contains a far higher concentration of CBD than marijuana. However, unlike tetrahydrocannabinol (THC), which can get you high as a kite, CBD shows no such effects and instead can actually decrease or completely eliminate THC’s effects while also having many claims of beneficial effects ranging from treating back pains to curing cancer. This is probably one of the reasons why there has been a sudden increase of popularity for hemp and CBD.

However, as of the moment of writing this, only one medication containing CBD had been approved by the Food and Drug Administration (FDA). It’s called Epidiolex and it is used as a way to treat certain types of epilepsy. But if we look at how things are progressing at the moment with all the research and studies conducted on the different chemicals of the cannabis plant, its future can be considered as bright as the sun.

In general, hemp can be grown from seeds to its mature form in a span of just four months. However, the months where it can be grown varies depending on where you are located in the world.

Of course, a long period of selective breeding resulted in the creation of new hemp varieties and different traits that make it possible to cultivate hemp in areas that were previously deemed impossible.

Interesting Fact: Hemp plants are usually grown close together, as close as four inches, which means that you can save more space while having a higher yield than other plants that need an ample amount of spacing in order to grow.

In most countries where the cultivation of hemp is considered legal, only the amount of THC dictates, whether it is illegal. Around the world, the amount of THC that hemp plants need to have is usually only at 0.2%, while in the United States, it is at 0.3%.

However, using hemp as ingredients for products such as foods, oils, fuel, or cosmetics is almost always legal and widely available worldwide. Additionally, you might also need to get the necessary license and permits from your local government if you plan to deal with the cultivation or transportation of hemp and hemp-based products.

The popularity of hemp and hemp-based products may seem like a storm that had suddenly taken over the world. Still, in reality, evidence of using this type of plant, specifically as a usable fiber for making rope and clothes, can be traced back as far as 50,000 years ago.

That being said, I have no issues with people growing and enjoying what is now known as a mostly harmless plant with many uses, both medicinal and utilitarian. Oh, by the way. My research allowed me to identify marijuana growing in my neighborhood correctly. I am assuming it’s not wild, but who knows. If it appears to have been “harvested” anytime soon, I guess I’ll have my answer.