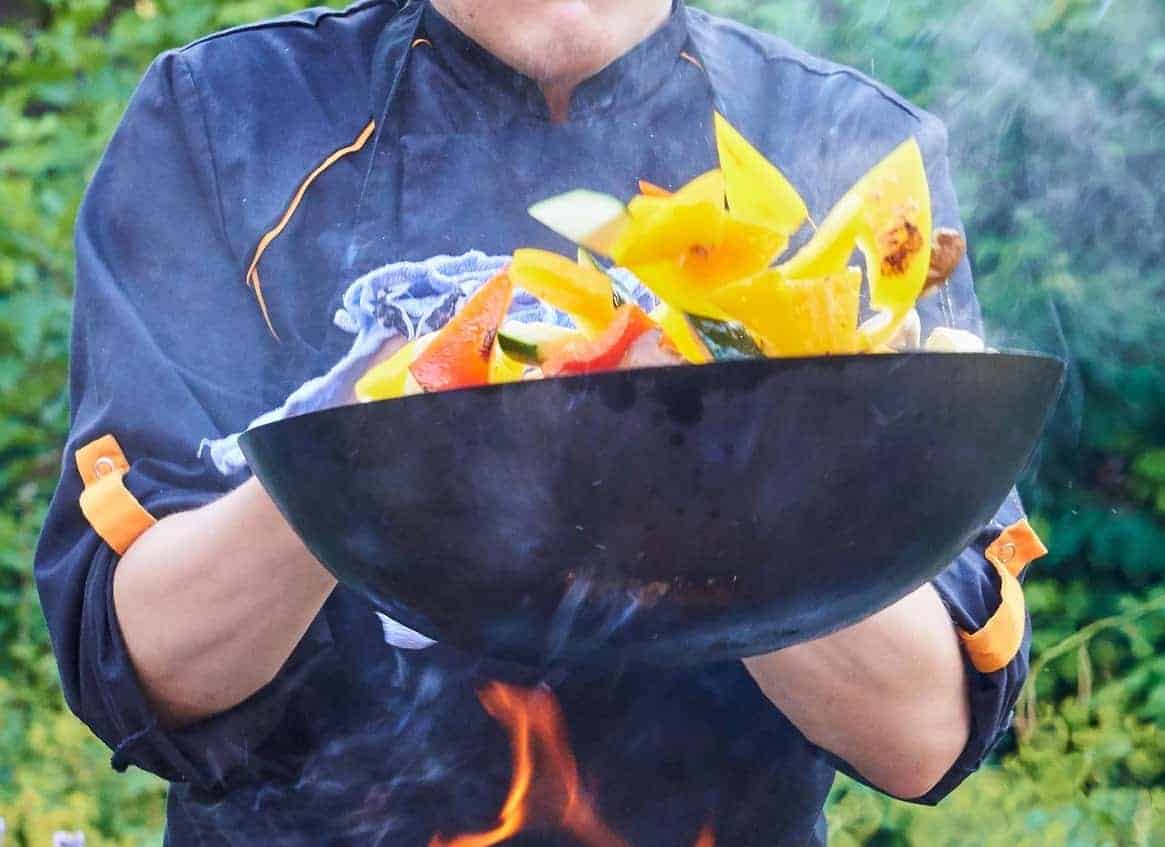 One of the many benefits of a wok is the diverse range of foods you can cook in them. They can be used outdoors for just about any of your cooking needs including stir-frying, deep-frying, steaming food, or even make stews. But what is the best wok for outdoors and how do you cook with it?

Woks with a long handle, such as mandarin or BBQ woks, are the best kind to use on a campfire. The cooking process is similar to how it is done on a stove. First, preheat your choice of oil, then over direct heat continuously rock the wok back and forth to mix the food. It should take 5–10 minutes to fully cook.

A wok might just be the perfect “pan” to either take camping or keep in your outdoor survival kit. They are generally lightweight and multi-purpose. Read on to learn more about how to cook on a campfire with them as well as the best type of wok to invest in.

Cooking on a campfire with a wok can be divided into 5 steps. Although these steps are fairly uncomplicated, it’s important to remember what to do and the order in which to do them.

Here is the simplest way to use a wok over a campfire, and will work well for most outdoor and survival situations:

Before doing anything else, it’s always a good idea to wipe your pan out. This will take care of any dust, dirt, or remnants from your last meal which distort the taste of your meal or cause your food to get stuck to the pan as you cook.

Once your pan has been cleaned, coat it in some form of non-stick substance if possible. When cooking with a wok, you’re essentially frying your food quickly at very high temperatures. Without treating the pan, you significantly increase your chances of much of your meal sticking to the wok.

By preheating your wok before you put the food in, you help your non-stick substance to disperse throughout the entire pan and shorten the amount of time it will take for your food to cook.

To preheat the wok, just hold it over the campfire so that it gets direct heat from the flame, preferably towards the middle of the fire. In roughly 1-2 minutes, your wok will begin to smoke, which will be the signal that it is ready to cook with.

Once your wok is preheated, you’re ready to put your food in.

If your meal is simple and only consists of one type of food, then you don’t need to be particular about how you put your food in. However, if your meal consists of multiple types of food, like meat and vegetable stir-fry, then it is best to cook each type of food in a certain order for the most optimal result.

Aside from making sure that you’ve put non-stick on your wok before you cook, one of the most important aspects of successfully using a wok on a campfire is to keep the food moving as you cook.

Once you’ve put your food into the wok, gently rock the wok back and forth without spilling any of the food over the sides. This rocking motion will sift the food as it fries, which will allow it the heat from the campfire to disperse to all of the food inside the wok and prevent it from sticking to the pan.

You can also intermittently stir it as well, although it usually isn’t necessary. The rocking motion will sift the food sufficiently most of the time, but sometimes you will need to stir your food as well to ensure that all of it cooks properly.

When using a wok over the direct heat of the campfire, it should take between 5–10 minutes to fully cook your food. Once finished cooking, the food will be ready to eat as soon as it cools down.

Be careful as the wok will be extremely hot. You may want to set it down for a bit to let it cool before you try either eating directly out of it or transferring into another container.

What Is the Best Type of Wok for Campfires?

Most woks either come with one long handle and one short handle or two short handles. In general, there are three basic types of woks:

Of the three types of woks, mandarin woks and BBQ woks are the best ones to use on an open campfire. They are similar in how they can be used since both types just need to be held directly over the fire.

BBQ woks do cook faster due to the perforations in the pan that allow heat to come into contact with the food more directly with more air circulation as you cook. As such, BBQ woks will likely require more tending to than a Mandarin wok to ensure that your meal doesn’t burn.

Unless you have a way to suspend it over the fire, I don’t recommend using a Cantonese wok because of the lack of handle length. They are really awkward to maneuver over an open flame without burning the heck out of yourself.

If you plan to only do traditional campfire foods, such as hot dogs, hamburger, etc. then I recommend a BBQ wok. They are generally easy to use over a fire, lighter due to the holes in them, and will cook food faster. You will also get a smoky flavor in the meat.

The exception would be if you plan to make elaborate Asian means on a camping trip. In that case, you will want to use a Mandarin wok.

What Type of Metal Should an Outdoor Wok Be Made Of?

Along with knowing how to use a wok on a campfire, it’s always good to know the best types of woks to be used outdoors and on open-fire cooking.

Woks tend to be made with three different metals

Overall, the best type of wok to use on a campfire would be made of carbon steel. If you’re looking for a wok that will cook your food fast and last you awhile, carbon steel is definitely the way to go.

What Size Wok Should I Use?

The size of your wok mostly depends on how many people you want to cook for:

Widthwise, you want to have a wok that is at least 1.8 mm. Woks that are smaller in width are designed for indoor cooking and will be far less likely to hold up.

For me, weight is a big issue. If I were carrying it in a backpack, I would never want to carry a 22-inch wok. A 12″ wok will be about all you need for most circumstances.

Does the Handle Matter?

You typically have three choices when it comes to wok handles:

Based on this information, wooden handles are the superior choice for outdoor cooking.

In case you’re wondering, my favorite wok for outdoor use is the Red Cat Limited 14″ Craft Wok (Click the link to see Amazon listing).

Or, if you prefer to go the BBQ wok route, check out the Tablecraft 11″ Nonstick wok.

A wok is a viable alternative to a traditional pot due to its versatility, low weight, and ease of use. You don’t need to bother suspending a wok over a fire since it can easily be held by hand. How cool is that?

What is a cowboy wok? Originally made from cultivator discs, cowboy woks usually have one disc mounted on legs and a second disc mounted above the bottom disc with space in between. Coals can be put between the discs to provide a heat source so that cooking can be done on the top disc.