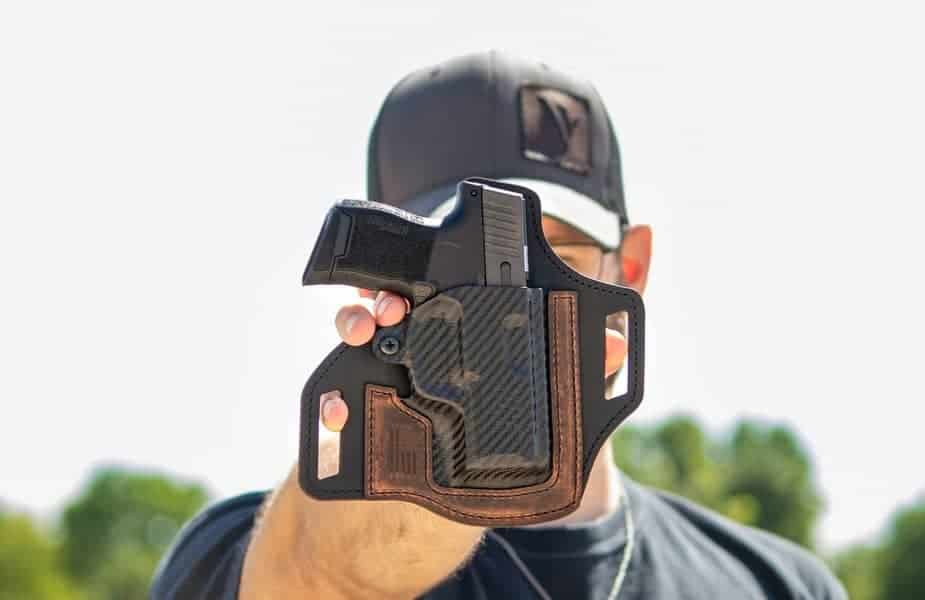 It is impossible to talk about gun ownership without mentioning gun permits. Among the most common types of gun permits are open carry and concealed permits. To know which among these two fits you best, you need to know the differences between them.

The rest of this article will detail the differences between an open carry permit and a concealed permit. We shall also see which permit will best fit your needs. Read on for more information.

With the concealed permit, as its name suggests, you should conceal the weapon when in public in a way that nobody can spot the firearm even through your shirt. On the other hand, an open carry permit is a permit that allows you to openly carry the weapon as long as you have a legitimate purpose, and you are not breaking other laws.

The other major difference is that you need a permit to carry a gun concealed in all states. However, with open carry, some states do not need you to have a permit.

Is It Better To Open Carry or Concealed?

Telling the best permit between a concealed and open carry is among the most heated debates among gun owners. The permit you have will determine how well you will be prepared for defense if you need to use the gun. Here are some of the factors you should consider to help you know which permit is better for you:

When you have a good and reliable open carry holster, like the one I recommend (Click to see Amazon listing) your gun will be the first thing that you hold when the need arises. Therefore, if you are in a high-risk area where there are high chances of using the weapon, getting an open carry permit is better.

Gun laws differ in different states and countries. In some states, you can carry one without a permit, while in others, you must get a permit to carry the weapon. However, there are restrictions on how you will carry even if you have a permit. Following these restrictions will help you know which permit fits you best based on how you intend to use the weapon.

When thinking about getting a gun permit, think about how much attention you intend to draw. If you believe that making it visible will scare potential criminals, you can get an open carry permit. On the other hand, if you are worried that people who may see your firearm may think you are a criminal, you should get a concealed permit.

Comfort in Carrying the Gun

The convenience and comfort of carrying a gun should be a priority when considering which permit is the best. Think about it this way, when you have a concealed permit, the concealed carrying holster is often located next to your skin. As you move around and even sweat, the gun can become uncomfortable or even cause rashes on your skin.

When you decide to open carry, you have an added advantage since you carry the weapon away from your skin. However, this will also demand some extra dollars to conveniently open carry the gun. Therefore, consider the comfort you have carrying the weapon open or concealed, and go for the option that best fits you.

Can You Carry Two Guns With CCW?

CCW is the permit of carrying a concealed weapon. In some cases, you may opt to carry two guns for reasons such as added security or one of the guns’ failures. Luckily, if you have a concealed permit, you do not need an extra carrying permit for the concealed firearm.

You can conceal carry two guns with one CCW. However, like all other gun laws, this may differ for different countries. For instance, in Mexico, you need to have a CCW for every firearm that you carry. Therefore, check the specific laws in your state and country to avoid going against the law.

Is a Concealed Carry Permit the Same as a Pistol Permit?

You do not need to get another concealed carry permit when you have a pistol permit. We strongly recommend that you read the laws in your state to avoid facing criminal charges because of doing something that you thought was legal in that state.

What States Can You Carry a Gun Without a Permit?

As mentioned earlier, some states do not need a permit to carry. In these states, it is constitutional to carry around the weapon, which is why guns are known as constitutional carry or permit-less carry. The states where you can carry a gun without a permit are:

Among these states that are permit-less carry, North Dakota and Wyoming are the only states where only residents are allowed to carry the gun without a permit. Non-residents will need to access a carrying permit to legally have a firearm.

States where the open carrying of guns is prohibited are:

States that require a permit to carry firearms are:

What Is the Difference Between a Gun Permit and a Gun License?

So, even if you are qualified to use the firearm, you need a permit to legally own a firearm. When you get a gun permit, you are restricted to using the weapon in the ways that are mentioned in your license. This means that you will need to acquire a license first before a permit. In some cases, the permit you get is determined by the firearm usage training you have.

Safety Recommendations for Carrying a Gun

Even when you have a gun license and permit, you can make costly mistakes if you are not careful. Some of the regulations to remember when handling firearms to ensure safety is:

This YouTube video explains more about the differences between an open carry and a concealed permit:

A permit will help you enjoy the benefits of being a gun owner without the fear of getting in trouble with the law. If you are torn between getting an open carry permit and a concealed permit, hopefully learning the differences between the two has helped you make a concrete decision.

Additionally, remember that for whatever permit that you decide to get, there is a price you pay to hold it.

Our ancestors would usually make a bow from whatever wood they had at hand. However, with time they started to recognize that certain types were superior to others. The good news is that no matter...

Continue Reading
link to When Is the Best Time to Buy Ammo? | What You Need to Know

When it comes to ammo, figuring out where and what to buy can be an overwhelming endeavor. Beyond price and type, when to buy can be equally important. As with any other product, market forces can...