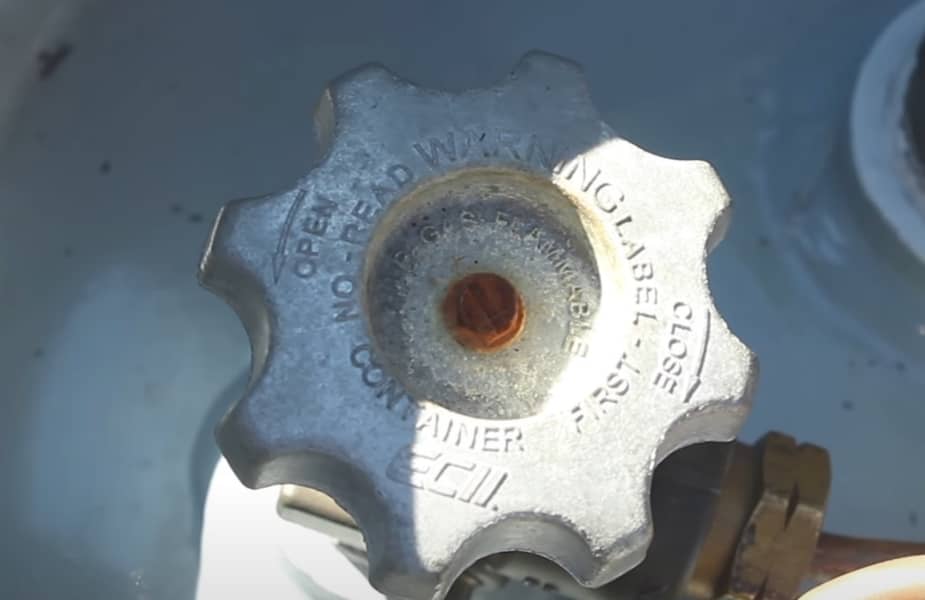 While grilling enthusiasts unanimously agree that safety is paramount, they differ sharply on opening the valve. Some argue it’s safer to turn the valve all the way, while others argue opening it partway will do. Which school of thought should you subscribe for a safer grilling experience?

You should open a propane tank valve all the way when using a grill. The valves are double sealing which means they seal in a fully open or closed position. Turning it partially increases the chances of gas leaking. Turn the valve counterclockwise (in the “Open” arrow direction) until it stops.

The rest of the article will examine propane tank valve guidelines, tank safety, and whether you should turn off the propane tank after a grilling session.

The valve on a propane tank is a manual open-closed valve with fine threads to ensure a tighter fit when it’s closed. These valves are not throttling or regulating devices and shouldn’t control the combustion rate on a grill.

Typically, there are three types of propane tank valves:

Named after the company that invented them, these are the oldest type of valves on the market. They use a female left handed thread, i.e., the threads are inside the connector and require a wrench to connect the valve to the tank. POL valves release the propane gas without any additional connection, making them unsafe.

During transportation or storage, you must screw in a plug into the valve to keep the gas from escaping. A POL valve comes with a bleeder valve and a pressure relief device to prevent over pressurization.

Technically known as a Quick-closing coupling valve, the Acme valve

is slightly bigger than a POL, not to mention much safer. The valve comes with an additional sizable male thread on the outside and the older internal female threads. Combining the threads allows the valve to be used in older appliances.

The valve is secured on the tank by turning it clockwise by hand. You must attach a device for the built-in safety valve to open and allow the gas to flow. The safety valve makes this valve safer and eliminates the need to install a plug before storage or transportation.

Also known as the Overfill Prevention Device or OPD valve

, this valve resembles the ACME valve save for the differences in handwheel. The handwheel on old cylinders has five or six spokes, while those on OPD valves have three lobes.

OPD valves come with a safety valve to prevent overfilling the cylinder. All new cylinders come with an OPD valve, and you can legally refill them.

Propane tanks are made of welded steel, composites, or aluminum, but steel tanks are the most common.

Save for physical damage such as dent, cracks, and fractures, steel propane tanks are safe and pose little to no threat of fire and explosion. They come equipped with a pressure safety relief valve

to guard against imploding from pressure build-up.

To ensure that your propane doesn’t pose a threat to your health and property, bear these safety precautions in mind.

Keeping the valve on a propane tank closed is the best way to guard against leakage. Turn off the valve first and keep the burners running to clear the excess gas from the lines. Once the burners go off, turn their knobs to the off position.

Shutting the tank valve lowers the likelihood of the gas leaking from a damaged hose pipe or through the regulator and valve connection.

However, propane is flammable in the right propane/air mixture ratio. If the amount of propane in the air is between 2.15% to 9.6%

, the propane can ignite and burn.

Keeping propane tanks outdoors in a well-ventilated area lowers the risk of explosion as the gas dissipates quickly if there’s a leak.

While a propane tank is unlikely to explode, you should never store it in direct sunlight. During hot summer days, ambient temperature can exceed 120°F, high enough to heat the tank. As the temperature rises, the gas pressure inside the tank builds up.

Most portable propane tanks feature a safety relief valve that will activate following an internal pressure build-up. Once activated, the valve releases the gas into the air when it can build up and ignite in the presence of a spark.

Always Keep the Gas Cylinders in an Upright Position

It’s best to keep a propane tank propped upright as it lowers the chances of a leak. Lying a cylinder on its side can lead to a leak if the valve is damaged or compromised. At 0.1162 pounds (52.7 grams) per cubic feet, propane is heavier than air

Inspect the Regulator and Hose Regularly

If you smell gas, it has a characteristic rotten egg smell; despite turning off the tank, there’s a likelihood of a leak. Inspect the hose for obvious damage signs such as cracks and tears. If nothing is visible, carry out the bubble to test the propane tank for leaks.

Here’s how to Inspect the Regulator and Hose Regularly:

It’s normal to turn on a grill and leave it to preheat to optimal grilling temperatures. Most people leave their grills to preheat for 5 to 10 minutes.

If you leave a grill to preheat only for it to turn off, don’t light it up immediately as it could explode or catch on fire.

Instead, turn off the propane gas tank and leave the grill unlit for 5 to 10 minutes. If the grill is in an enclosed space, open all the windows and doors. If the grill comes with a lid, leave it open as well.

Despite the flames going out, the propane is still flowing from the tank and escaping through the burners. The propane gas accumulates inside the grill and around the grilling area.

Re-lighting the grill immediately could ignite the accumulated propane gas and cause it to explode or catch on fire.

Waiting up to ten minutes before re-lighting the grill allows the propane gas to dissipate, lowering the risk of an explosion. After ten minutes, you can safely light the grill and carry on with your grilling session.

Do You Turn Off Propane Tanks After Grilling?

For safety reasons, always turn off the propane tank after each grilling session. Turning off the grill keeps the gas flowing through its burners but doesn’t stop the LPG gas flow from the cylinder. Instead, the gas keeps flowing until it fills the tubing, stopping further flow from the gas cylinder.

Theoretically, if the regulator works fine and the tubing is undamaged, leaving the propane tank poses no threat. However, it’s better to err on the side of caution and turn off the gas.

If there’s a leak in the hose or the regulator, the propane’s small continuous leak could eventually empty the tank. If the grill is in an airy outdoors setting, the gas would slowly dissipate in the wind until the tank is empty.

If the grill and the tank are in an enclosed space, the gas could slowly accumulate, posing a fire threat. Since LPG is heavier than air, it won’t merely float away. Instead, it slowly builds around the floor by displacing the air, which makes it dangerous. The gas can ignite and explode the next time you go to light up the grill.

It only takes a small flame such as a lit cigarette or even static to ignite the accumulated gas, causing an explosion or a fire. That means the gas can explode even when you’re not using the grill.

If the regulator on a closed grill malfunction, the gas accumulates inside the unit and will likely explode the next time you turn on the grill.

Technically, the valve on a propane tank is not a regulating or throttling device. It’s merely a valve with the dual capacity to seal in an open and closed position, which means turning it partially increases the likelihood of a leak.

Using the tank valve as a regulator increases the chances of an explosion or a fire since it could cause the flame to go off while the gas continues to flow. Re-lighting the grill without allowing the accumulated gas to dissipate leads to a fire.

Here are a few more articles that you may be interested in.