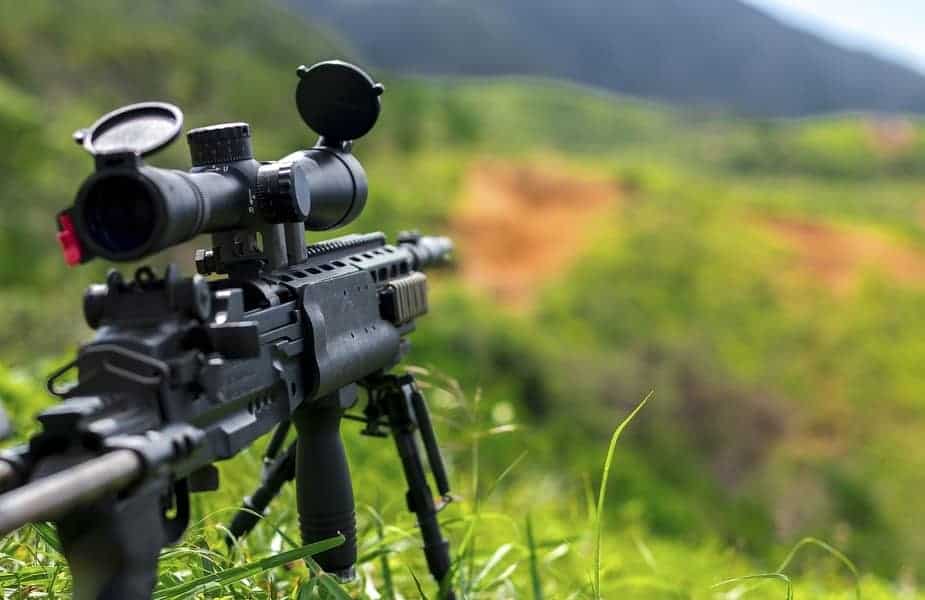 If you’ve been around firearms long enough, you’ve almost certainly heard fellow shooters mention the acronym “DMR” at some point. Because of that, you may have been left wondering: what is a DMR?

What makes a rifle a DMR is adding a scope, precision triggers, a longer barrel, and a stabilizing bipod to it. The Designated Marksman Rifle offers a higher rate of fire, accuracy, and terminal ballistics made to sit in ranges between those of standard rifles and dedicated sniper rifles.

Read on for insights into the defining characteristics of a DMR, their caliber, whether the law allows civilians to own one, and some of the best designated marksman rifles you can buy.

What Makes a Rifle a DMR?

Now that I’ve given a brief overview of what a DMR (Designated Marksman Rifle) is, let’s explore them in depth.

Some of the distinctive characteristics of a DMR include:

Some examples of DMRs include:

More on these in a bit.

What Caliber Is a DMR?

Despite their distinctive features, DMRs are often chambered in the typical calibers used in standard rifles. This is to allow the marksman to interchange ammunition with other team members.

The most common calibers are the 5.56×45 mm and the 7.62×51 mm NATO cartridges, thanks to their availability to civilians and soldiers.

What’s the Difference Between a Marksman Rifle and a Sniper Rifle?

As their names suggest, a DMR means the rifle is designed for use by a designated marksman, while a sniper rifle is built for a sniper.

Based on the distinctive features of DMRs mentioned previously, we can identify several differences between a DMR and a sniper rifle.

This table below describes some of the differences between the two in more detail:

Is It Legal To Own a DMR?

Under the Second Amendment, US citizens and residents enjoy the right to keep and bear arms and the purchase of rifles is legal in most states.

However, you must comply with the Gun Control Act of 1968 and the National Firearms Act of 1934 when buying, selling, or handling a DMR or other gun type.

Some of the mandatory requirements to own a DMR include:

Additional restrictions apply to dishonorably discharged military personnel, illegal migrants, those with felony and misdemeanor sentences, and those temporarily visiting the US on non-immigrant visas, such as tourists.

If you’re thinking of getting a designated marksman rifle, here are some of the best options you could buy:

Borrowing from the design and features of the M16 and M4, this DMR features a 20-in (50.8-cm), triple-lapped stainless barrel, an adjustable gas system, a National Match trigger, and a free-floating rail system.

This semi-automatic 7.62 mm NATO DMR features a proprietary gas system. It’s designed to handle up to 15,000 rounds without failure or accuracy degradation. It comes with ambidextrous controls, a retractable buttstock, an optional suppressor, and 10- or 20-round magazines.

This semi-automatic, magazine-fed, 7.62 mm NATO rifle comes with a NiCorr-treated, 18-in. (45.72-cm) barrel. It has a non-reciprocating charging handle on the left, a flattop upper receiver with folding iron sights, a contiguous rails system to support various accessories, and a Magpul UBR stock. It also comes with a two-stage Geissele trigger and works with or without a suppressor.

Once common in the paddies and cities of Vietnam during the Cold War, the M14 remains one of the best DMRs to date. It features a fixed front post sight with wings for protection, an adjustable rear sight, and a two-stage, 5 – 6.5 lbs. precision trigger.

If you’re looking for a DMR that’s accurate, reliable, and effective, you’ll never go wrong with the M14.

The FN SCAR – H is one incredible DMR designed for rapid and accurate fire at different ranges. It’s lightweight and durable, making it one of designated marksman and sniper teams’ favorites.

The FN SCAR – H is an all-around rifle and its controls are similar to those of the AR-15.

The G28 deserves a spot on the list of the best DMRs on the market. This variant of the HK417 is the most preferred by the German Army—the 15th most powerful army in the world—according to GlobalFirepower’s 2021 ranking.

The MK20 comes with a 20-in, chrome-lined barrel, a monolithic hard coat, and an anodized upper receiver. The DMR also features a side-folding retractable stock with an adjustable cheek pad.

This 7.62 mm NATO caliber rifle is highly acclaimed for its remarkable performance. Its unmatched accuracy, ambidextrous controls, and flexible mounting capabilities are some of the features that make it one of soldiers’ and civilians’ favorite DMRs.

At the heart of the M110 is a 20-in. rifled barrel. The durable dark earth-colored coating extends its durability.

The LM308MWS rifle has proven to be accurate, reliable, and effective while engaging targets at close-quarters combat and distances beyond 800 meters.

Tip: Regardless of the rifle you choose, shooting sports are more enjoyable if you have the right skills and experience, which you can build up through practice. To improve your skills, I recommend that you read this Navy SEAL Shooting book. It teaches some of the groundbreaking methods developed by one of the most respected firearm instructors, retired Navy Seal, Chris Sajnog.

Finally, when buying or using any of the DMRs mentioned in this article, or any other type of gun for that matter, ensure you comply with the relevant Federal and State laws.

link to What Is the Cheapest Way to Buy a Gun? | 5 Vendors Compared

Continue Reading
link to How Much Does a Typical Gun Cost? | With Examples

There are many different types of guns out there, depending on what you would like to use it for. This causes a wide range of costs when you go to purchase. Knowing which gun you would like to...