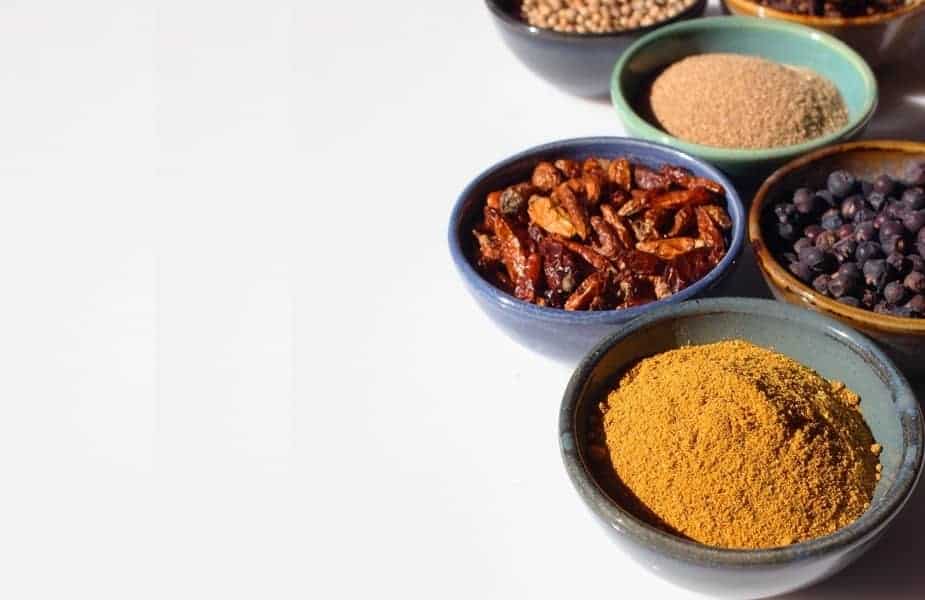 Are you experimenting with your cooking, or have you just plain run out of black pepper? Either way, it’s good to know if there’s a decent substitute. As every professional or would-be chef knows, improvisation is crucial in the kitchen.

A few things you can substitute for black pepper include:

So, you can see, there’s no shortage of black pepper substitutes waiting patiently in the wings. Let’s go through each one so you’ll know exactly how to use them.

Well, the most obvious alternative to black pepper is white pepper. You can use it in the same quantity you would have used for black pepper.

Interesting fact: White pepper comes from the same fruit as black pepper. It’s just that it’s the seed in the fruit that gives us white pepper. If you crack a black peppercorn, you’ll see the white seeds inside. Also, the fruit is almost fully ripe before picking.

After harvesting, the dark skin is removed, and the seed is then dried in much the same way as black pepper.

Opinions seem to vary as to whether white or black pepper is hotter. So, the best thing to do is to taste your white pepper and adjust the amount you use to suit. And, if your white pepper isn’t giving you the kick you want, add some cayenne pepper to it.

Cayenne pepper comes from the capsicum family, so it’s a kind of chili pepper, but not overpoweringly hot. It has a moderate heat as far chili peppers go. But take care, as it’s a lot hotter than white or black pepper.

So, add a small amount to your mix to start with. You can then adjust the proportion to taste.

So, black pepper comes from fruits picked just before the ripening stage. In contrast, for green or white peppercorns, the harvesting of the fruit happens much earlier.

Quick tip: Dried green peppercorns have a milder peppery taste and carry less heat than black. So, they’re useful when you want the peppery flavor, but without the heat. It’s ideal for salads and fish.

Again, if you do want that kick, feel free to add a little cayenne pepper.

Despite their name, pink peppercorns aren’t related to black, white, or green peppercorns, although they are similar in shape and size.

They’re berries, and the trees that produce them are from South America.

Interesting info: Although they’re not related to black peppercorns, they still have a distinctive peppery, yet fruity flavor. The difference, apart from color, is that they’re hotter, almost like a mild chili pepper.

So, if you use pink peppercorns as a substitute for black pepper, you might want to roll back on the quantity a bit.

Pink peppercorns are ideal for rubs on meat and fish.

However, be aware that as pink peppercorns are from the same family as the cashew nut tree, they may pose a risk to anyone with a tree nut allergy.

Somewhat confusingly, Szechuan pepper isn’t related to black pepper or chili peppers. The Szechuan peppercorn is the berry of an entirely different plant, a tree known as prickly ash.

The Szechuan pepper has a fragrant, citrusy flavor. It’s not hot like black peppercorns or chili peppers. This spice’s distinctive characteristic is the numbness it induces on your tongue when you bite into it. Hot on the heels of that, you’ll experience a tantalizing tingling sensation.

Like other peppercorns and seeds, Szechuan peppercorns are great as a rub for meats and adding to soups, hotpots, and stir fry dishes.

Pro tip: If you want to use it more like a seasoning, toast the peppercorns, then grind them before sprinkling into your dishes. But, make sure you remove any black seeds before you grind to avoid an unpleasant grittiness.

If that hasn’t tickled your taste buds, watch this video. It runs you through the above peppercorns, explaining a bit about the way they’re processed and their different qualities.

The characteristic of black mustard seeds is their pungency. You’ll find them used in many Indian dishes.

They’re crunchy when raw, so good for adding texture to a dish.

But when raw, there’s also a bitterness to them. So, if you use raw ground black mustard seeds, try adding a little at a time.

If you’re cooking them, the heat removes the bitterness, as well as the crunch. You’d probably also be better off using the seeds whole unless you don’t want the texture.

Yellow mustard seeds are somewhat milder, and perhaps there’s a slight sweetness to them. So, you can add them raw or ground in more liberal quantities.

Quick tip: If you want to have little heat, mix in a small amount of ground black mustard seeds. Again, go slow to start with because you can always add more if needed.

Coriander seeds come from the same plant that gives us coriander leaves. The plant bolts and produces flowers when growing conditions are too hot. It’s the flowers that produce the seed.

You can use the seed whole, crushed, or ground, in much the same way as you use black pepper.

It’s up to you: You don’t need to toast the seeds before using them whole or crushed or before grinding. But doing so can enhance the flavor, although it comes down to taste. Try it both ways and see what you think.

In the whole or cracked form, they’re an excellent substitute for black pepper in a rub for meat. The seeds add texture and a citrusy flavor with a hint of sweetness.

When ground, use it as a seasoning, so add it as you would to sauces, marinades, pasta, vegetables, and doughs.

Where Does Black Pepper Come From?

Because black pepper is everywhere in one form or another, we don’t often give much thought to where it comes from.

It’s an ancient spice that originated in Southeast Asia, and that region remains the largest producer.

Cool fact: You may not realize that the plant from which we get black pepper, Piper nigrum, is the same plant that gives us white and green pepper. They all derive from the fruit of the plant.

The difference between them is the stage at which the fruit is picked and the way they are subsequently processed.

For black pepper, the fruit is picked before it’s ripe just as it’s starting to turn red. It’s then put in boiling water for ten minutes and later dried. This process is what makes it dark brown or black. Once dried, which might be after three or four days, the peppercorns are ready for the grinder.

Of course, you can leave the peppercorn whole for grinding later, or you can crack it.

We all know black pepper as having a somewhat pungent taste along with a bit of heat. That said, the ground version tends not to be as strong.

So, there you have it, a wealth of potential substitutes for black pepper for you to try out.

Hopefully, we’ve whetted your appetite, so, go on and give them a go. After all, part of the fun of cooking is in the experimentation and perfection of new and old recipes.

The black pepper substitutes discussed above are a sure-fire way to add new flavor dimensions that will give your taste buds a great workout. They’ll forever thank you for it.