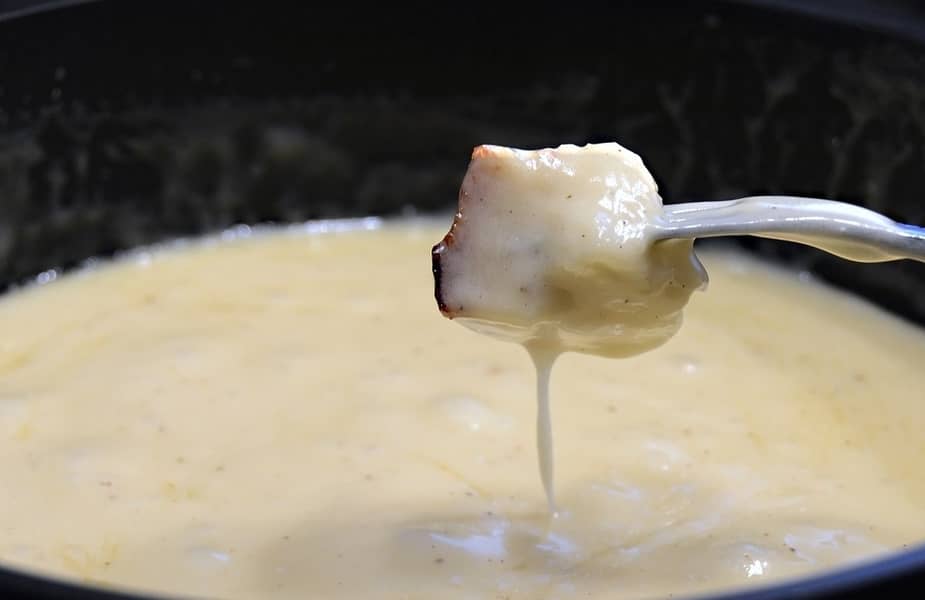 American cheese is a classic, and its versatility is unparalleled in the dairy world. However, sometimes you are either out of it or just want a replacement for one reason or another. Luckily, there are a few amazingly good alternatives.

The best substitutes for white American cheese are provolone, Monterey Jack, white cheddar, Oaxaca, fontina, mozzarella, Havarti, and muenster cheese. Provolone is the closest match and will be a suitable replacement in just about any recipe, while Monterey Jack works really well, specifically in queso.

Whether you are looking for a replacement on a sandwich, in queso, or for health reasons, you have come to the right place. In this article, I will hit every angle as we explore the best replacements for white American cheese. By the way, you just have to try #8 on a grilled cheese!

This is probably the closest match if that’s what you are looking for.

Provolone cheese is an excellent alternative to White American because it is similar in texture and taste. White American is a mild-tasting cheese that is a better-tasting alternative to regular orange American cheese. Provolone is also a mild cheese that has just enough flavor to enhance the right dish. It is most classically used on Philly cheesesteaks but could be added to almost any dish that requires a mild, white cheese.

Best Uses: Provolone is very good unmelted. But where it really shines is when it gets heated. Provolone also has a soft texture and has a decent fat content, which makes it perfect for melting. As you know, white American also melts well, which makes provolone a stellar option to replace it.

This American-born white cheese variation is possibly one of the best substitutions for white American cheese. It is perfectly soft and has the same mild finish to it that white American delivers to its dishes.

While regular Monterey Jack cheese is plain white, it is often marbled with Colby cheese creating a hybrid known as “Colby-jack.” Colby is a yellow cheese that is also mild in flavor, yet somehow these two cheese together create a delicious unison of flavors. This variation of Monterey Jack is also a great choice to consider in place of classic white American.

Best Uses: Monterey Jack is often in Mexican dishes like queso because it melts to the right consistency and has a mild enough flavor to be enhanced by various spices or added ingredients. Additionally, there is a slight sweet backdrop to this cheese that also benefits from the added ingredients in queso.

While white cheddar cheese isn’t very mild on the taste scale, it can still melt to a gooey consistency. If it is to be used in place of white American, it is suggested to use a mild version of the cheese to mimic the original taste best. However, if someone is looking to add a richer flavor to a dish, choosing a sharper variety of white cheddar cheese is a great idea.

Best Uses: Recipes that generally call for white American cheese include dips, sandwiches, and sauces. Substituting white cheddar into these dishes can really elevate the overall flavor. Cheddar cheeses come in mild, sharp, or extra sharp, depending on what a recipe might call for.

Oaxacan cheese is a variation of Mexican “queso Blanco” cheese, which literally means “white cheese.” This specific variety renders down better than other kinds of queso Blanco. It is a semi-hard cheese that is white in color and is often compared to being close to Monterey Jack in flavor. More specifically, unaged Monterey Jack.

What makes this Mexican cheese even more interesting is that while it tastes similar to Monterey Jack, the texture strongly mimics mozzarella. Considering how well whole-milk mozzarella can melt, Oaxaca cheese is a strong contender for replacing white American!

Best Uses: The appeal to this cheese is like many others on this list in that it’s a white cheese that can work well as a base for a delicious dish. You can pretty much use it as a replacement for any recipe that called for white American.

Good fontina cheese can be a little expensive, but it is so worth it! With a fat content amount of around 45%, fontina melts so deliciously. It is another white cheese variation, and although it typically comes as a semi-harder cheese, the fat content is what helps it become a creamy substitute.

This cheese is similar to white American in its creamy melting point and white coloring. However, the taste is a little saltier and nuttier, which can be an acquired taste for some people. Even still, fontina is worth trying in a classic cheesy dish!

Best Uses: Fontina cheese can be used in many recipes where white American is called for. The best ones to try it in include mac and cheese, grilled cheese, and soups, along with a variety of other similar dishes.

Mozzarella is a notorious cheese most commonly used in pasta dishes and pizzas. While it is known for being used in mostly red-sauce meals, mozzarella can be an excellent choice for substituting White American in a recipe. It is super creamy and melts perfectly. With around 20g of fat, it is no surprise that mozzarella is a melting cheese.

It is important to note that mozzarella comes in two main varieties: part-skim and whole-milk. The whole-milk mozzarella melts much better than part-skim mozzarella. When choosing to swap out white American for mozzarella, always aim for whole-milk. Not only will the dish be more creamy, but it will also taste better!

Best Uses: For mozzarella, it’s probably best to mention which dishes to avoid using it in. While it works well melted over a chewy entrée like meat or veggies, it does not hold up well in dips. It tends to be stringy and clump together and is hard to separate once put in the dip.

Havarti cheese isn’t that similar to white American in its taste, but it is nearly identical in its texture. This cheese beautifully melts into ribbons of gooey cheese and is often used in fondues. It is a semi-soft cheese that can also be used on sandwiches or pasta dishes. When replacing White American with Havarti, you can expect a silk-smooth finish with a very unique flavor profile.

Havarti is best when it has only been aged around three months. At this point, the cheese has sweeter notes and a buttery smell and texture. If the cheese is aged much further past three months, it becomes entirely too salty and nutty in flavor. Havarti that is aged to 3 months, is the best choice as an alternative for white American.

Best Uses: Havarti can be used as a substitute for American in any recipe, assuming that you enjoy its taste. It tops well, it combines well, and it dips well. Try it on a Philly cheesesteak for an out of this world experience.

Muenster cheese is most identifiable by its incredibly luscious smooth texture and bright orange border. Moreover, this cheese has a super buttery taste making it a unique choice for certain food dishes.

The texture is often compared to being another variation of Brie because it is so soft and creamy. It makes a great alternative to White American cheese because it adds not only an insane level of creamy texture but also a unique flavoring.

Best Uses: The best way to use muenster cheese in place of White American is in a grilled cheese sandwich. Nothing beats a toasty sandwich with stringy, hot cheese in the middle.

What Is the Closest Thing to American Cheese?

What Is the Best Substitute for White American in Queso?

Queso is a tasty cheese dip often served at Mexican restaurants. Making this iconic restaurant staple at home can really help curb any cravings, but what cheese can be used if there’s no white American on hand? White American cheese is typically used in queso due to its mild flavor that can be built on with other ingredients.

The very best substitute for white American in queso could either be Monterey Jack or provolone. Both of these cheeses have a basic white base that can also blend well with the other components of a queso (like cream cheese, onions, or garlic in some recipes).

Ultimately though, these two are the best alternatives because they are a common cheese that someone might just have lying around in the fridge. While Oaxaca cheese could be considered a fantastic substitute in a good queso, but not many people will have it readily available.

The best replacement for white American really boils down to a combination of your personal taste and the type of dish you are making. For grilled cheese, I will stick to Havarti and for dips, I will reach for Monterey Jack. How about you?

I hope you enjoyed this article as much as I got hungry while writing it!

Thanks for stoppin’ by.

We've all gotten a bit overzealous with our seasoning at one point or another. Putting too much salt in a dish is probably the most common "oops" moment to be found in a kitchen. The good news is...

Each person has a preference for alcoholic beverages. Some like their drinks strong where they can taste all of the notes in the liquor. Other people like their drink more fruity and tropical tasting...