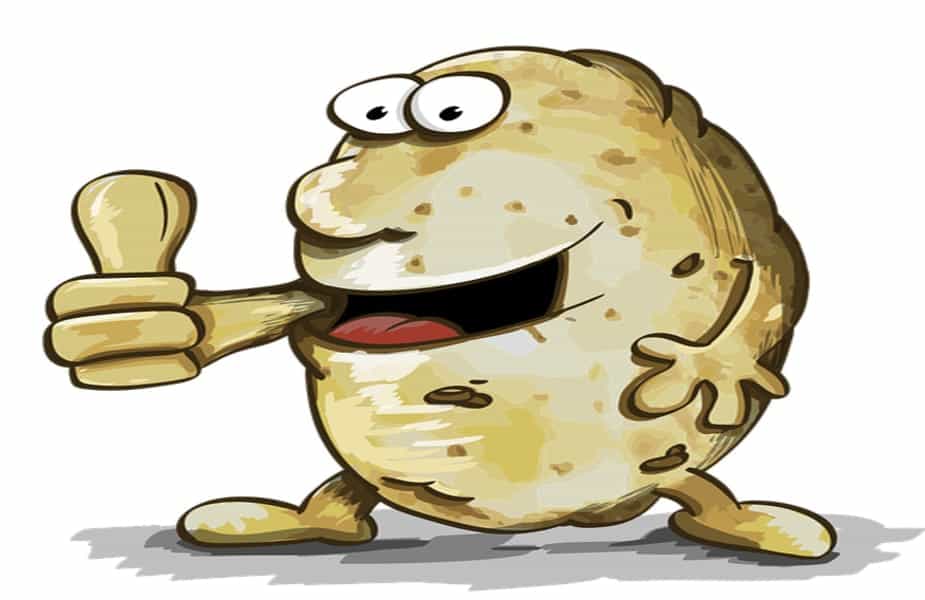 Potatoes are something many people eat nearly every day of their lives. Everyone knows how important they have been to human history. But are potatoes actually good enough to be included in a survival kit or stockpile?

Potatoes are an excellent survival food due to the fact that they contain nearly every nutrient needed for human survival including vitamin C, amino acids, and even protein. There are well-documented cases in history where humans have survived on potatoes alone for extended periods of time.

Let’s go into further detail on why you should consider including potatoes in your survival plan. Hint: Think long term sustainability.

Why Are Potatoes Such a Good Survival Food?

There are 3 reasons that potatoes are excellent for stocking up on:

There may not be a perfect food but potatoes come about as close as you can.

I had some red potatoes handy so I snapped a shot of the label. As you can, potatoes pack a stout nutritional punch.

What Nutrients Are Potatoes Missing?

Potatoes do not have essential fats, vitamin A, D, B12, E, calcium, and selenium. That’s it, only 7 nutrients are missing. Fortunately, most healthy humans will have stores of the missing nutrients in their body that they can temporarily live off of, sometimes for months at a time before suffering any ill effects.

In addition, while you could live off just potatoes for months or years it is unlikely even in a survival situation that you will be forced to eat just potatoes, allowing you to obtain the remaining nutrients from other sources.

I recommend mixing sweet potatoes into your stores as well. They contain more vitamin A and C and are loaded with manganese. Additionally, sweet potatoes are well-known to have anti-inflammatory properties. But the best reason of all is three words: sweet potato pie.

Getting the Most out of Each Potato

If you want to maximize the nutrition you are able to get from your potatoes you will want to use the most efficient cooking method possible.

Let’s take a look at each option:

Make sure that you eat the skin of the potato. This is actually where most of the nutrients are and it also will provide you with fiber.

2. Potatoes Have an Excellent Shelf Life

How to Store Your Potatoes

In the past, people would use root cellars but in modern times a basement will suffice. If you don’t have a basement then a dark pantry or similar room can be used.

The reason for utilizing this type of space for potato storage is because heat can cause your potatoes to sprout prematurely resulting. Sunlight is worse as it not only warms your potatoes but can also cause them to form toxic solanine which can cause illness in even small quantities.

You don’t want your potatoes to be too cold. Like in a fridge or freezer as it will cause the potato to spoil as the starch converts to sugar.

While you can store potatoes in containers make sure the material is breathable or that there is an opening to allow for airflow. Wherever your potatoes are stored should also be dry as moisture can cause your potatoes to become an unappetizing pile of goop.

Also, be sure to frequently check up on your potatoes and be quick to remove any that have begun to spoil. Otherwise, you risk spreading the spoilage to the rest of your stores.

If and when the next apocalypse happens, I am becoming a full-time potato farmer.

The cool thing about potatoes is that they can be used to make more, without seeds.

You can plant the potato whole or just cut out chunks containing eyes which are tiny stem buds. If you decide to cut wedges I recommend waiting until the cut area is dry and no longer soft before you plant the cut chunk which can take up to 24 hours. I also recommend facing the eyes upwards to allow for easier growth as this is where the sprout will be coming from.

Of course, your potato “farm” will need sun, soil, and water.

People argue over the amount of soil needed to cover a potato or how far apart each plant should be from each other but the great thing about potatoes is that they’re still going to grow.

This is great news that a complete amateur can start a potato farm even if it’s not perfectly optimized. In fact, potatoes can be grown in containers, allowing you to take your farm with you if you’re on the move.

The one thing your farm will not tolerate is cold. Be careful about planting too early in the spring and during the fall be prepared to protect your crop from incoming frosts.

How Long Can You Survive on Just Potatoes?

With each potato containing about 100 calories each, an adult male can get enough calories each day from about 20 potatoes. This translates to over 7000 potatoes in a year which may prove to be difficult if you don’t already have a large potato farm operation running prior to your survival situation.

The lack of vitamin A will begin to affect your eyesight after a few months and your kidneys will need to work extra hard to clear the excess of potassium from the potatoes.

While potatoes do provide protein and zinc it will barely be enough so injuries may take longer to recover from. The minimal amount of fat in potatoes will also eventually make it difficult to absorb other vitamins such as D, E, and K.

Also, there would be a dangerous lack of vitamin B12 which can cause irreversible nerve damage if neglected for too long. For the reason, I would recommend surviving on solely potatoes only for a few months and to be constantly looking for ways to supplement your diet.

Is One Type of Potato Better Than Another?

While there will be some variation on the nutritional and caloric content among the different varieties of potatoes, no type of potato is “better” than another. It all comes down to personal preference, just stick to the type you like to eat the most and you will be fine.

I would check with your local farm store and ask them which potatoes grow best in your area and go with that type.

Of course, as previously discussed, the exception to all of this is the sweet potato. No matter what type of white potato you decide to store, you will want to mix in sweet potatoes as well. My personal preference is 75% white, 25% sweet.

In my humble opinion, both white and sweet potatoes are a must-have for any survival stockpile. Their versatility and self-sustainable nature might make them the absolute best survival food in the world. Okay, I said it. You can quote me on it.

Is the potato diet safe? As long as someone does stick to just potatoes for more than a couple of months, there shouldn’t be any long term health problems. However, humans are designed to flourish best by eating a variety of foods. Always check with a doctor before starting any diet.