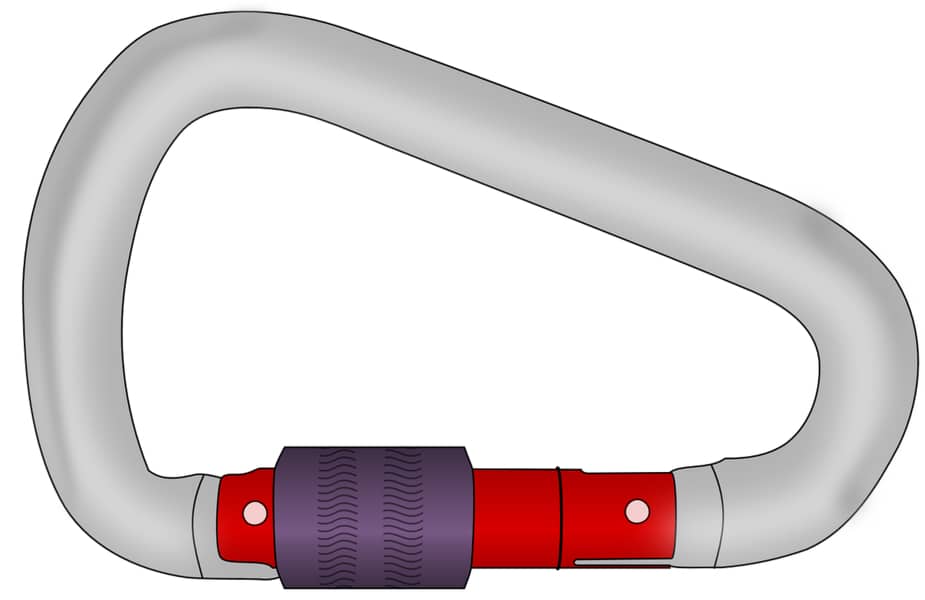 Carabiners are some of the most underrated tools for outdoor activities. They allow you to carry water bottles, electronic devices, and you can even climb with them. When you’re trying to get your hands on a good carabiner for your next outing, there’s no reason to settle for less than the best.

Throughout this article, you’ll learn the following information:

Getting a good carabiner can be the difference between having to carry all of your gear in your backpack and evenly distributing the weight. You can use them for a plethora of purposes, but only the best of the best can continuously support a high amount of weight. Fortunately, the Gabbro Carabiner is a top-notch, low-cost option.

Starting with the two primary materials, steel and aluminum, you’re already getting the highest quality available. Never settle for cheap plastic or bending metal. Aluminum cuts down the weight without sacrificing durability, while the steel clamp seals your belongings in place. Nothing will open it without you allowing it.

These rustproof carabiners can withstand an incredible 2,697 pounds (1,223 kg) of force. There isn’t a backpack on the market that comes with straps strong enough to contend with this carabiner. Push back the steel clamp, slide your items on the aluminum loop, and let it close with the spring-assisted gateway.

Despite the high weight limit, this carabiner only weighs 0.75 ounces. They measure in at 3.12 inches (8cm) by 1.77 inches (18 cm). You can carry them in your pocket wherever you go, or latch them on your backpack to carry around extra gear. They also fit perfectly on belt loops, purses, and keychains.

Perhaps one of the best features of this carabiner is the no-snag latch. It doesn’t get caught on threads or trip over itself when you’re closing it, unlike most other carabiners on the market. The aluminum curves right under the stainless steel hook, providing a snug, secure hold throughout the day.

When you’re done looking through all of the features, it’s time to pick out a color. Choose from the six different combinations to match your personal preference. A few examples include Black & Blue, Black & Orange, or just get four of the same color. Every pack gives you four high-quality carabiners for the price of one.

What Should You Look For?

Carabiners are relatively similar to each other, but there are a few noticeable differences. Even though they’re fairly cheap, you should find the exact match that you’re looking for. After all, you’re relying on them to prevent your gear from falling and breaking. Let’s review the five questions to consider when buying a carabiner for backpacking, camping, and hiking below.

As you can see, there are plenty of considerations to think about before you buy a carabiner. Don’t worry, though; You’re now well-equipped to find the perfect match for your outdoor activities. If you want to know how to properly use a carabiner, proceed to the next section.

How to Use a Carabiner

Whether you’re using your carabiner to climb boulders at Yosemite National Park or to set up your hammock on a windy evening, security is everything. Improper use can result in severe injuries. The good news is that there’s a simple technique that you can use to ensure a secure lock every time.

That’s all there is to it! All you have to do is make sure that it’s not snagged on anything and that the gate is completely closed. It’s not too challenging, but taking the extra step to pull it down all the way will prevent your belongings from slipping around and falling off. It also removes pressure from the gate.

Here is a useful video that will also help you:

Do You Need a Carabiner for Camping, Backpacking, and Hiking?

Carabiners aren’t always necessary when you’re adventuring in the outdoors, but they’re definitely a fantastic convenience to have. You can clip your gear to the back of your backpack, freeing up internal space and making everything more accessible. They’re also great for those of us who lose our keys far too often.

Another great use for carabiners is to hook up hammocks or latch tents to a tree branch if you don’t have stakes with you. They’re great for virtually anything that can secure on a looped surface, so why not add less than an ounce of weight at the benefit of protection, convenience, comfort, and security?

In short, you don’t need carabiners, but you should definitely want them. If you get the Gabbro Carabiner that was mentioned at the top of the article, you’ll also get three additional units as well as four key rings. For such a low price, it’s an unbeatable deal.

Carabiners offer unparalleled convenience and top-notch strength for an item that weighs less than anything else in your backpack. If you’re camping, backpacking, hiking, or partaking in any other outdoor activity, you should consider getting one of these efficient tools to make your adventure much easier. You’ll also be able to use them for a variety of other purposes.