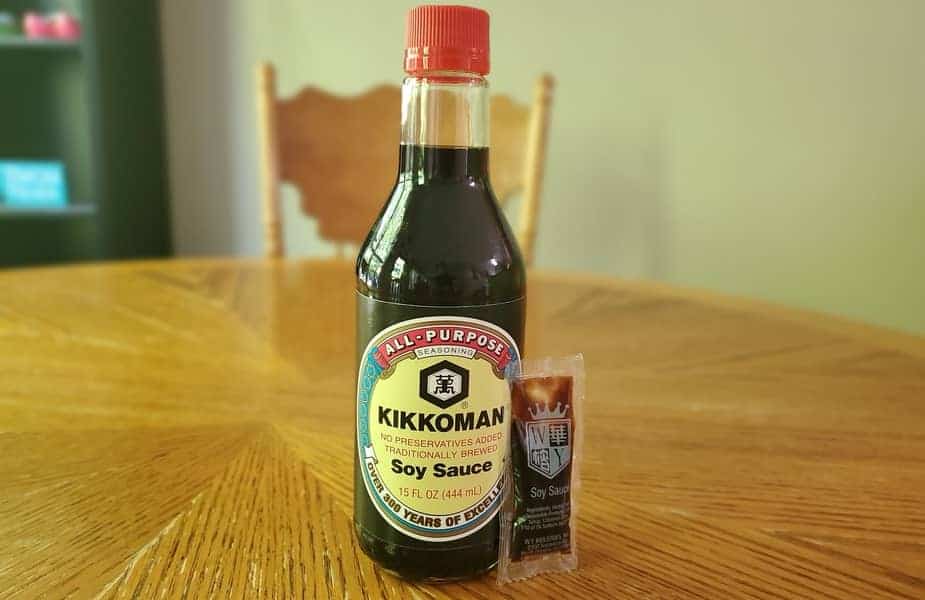 Lately, I’ve been using her kitchen more and more to prepare meals. Recently, I made fried rice as a side dish and asked her for soy sauce. Well, she pulled a bottle of soy sauce from the cabinet that looked to be from the 1960s, and when I opened it, the smell was overpowering! It tasted alright, so I went ahead and used it but started wondering just how long soy sauce lasts without refrigeration. It tasted okay, and we didn’t die from food poisoning, but I decided some research was needed.

How Long Does Soy Sauce Last Once Opened?

How long soy sauce lasts depends on many things, including the ingredients, how it was processed, and how it is stored, before and after the bottle is opened.

Here are recommendations for how long soy sauce lasts after opening with refrigeration and without:

How to Tell If Soy Sauce Has Gone Bad

Even though the Kikkoman website states that “As long as no water or other ingredients have been added to the soy sauce, it would not spoil if it had not been refrigerated,” they also state that “Once opened, the soy sauce will start to lose its freshness, and the flavor will begin to change. By refrigerating the sauce, the flavor and quality will remain at their peak for a longer period.” We can, therefore, deduce from this statement that the following could happen over time if we do not refrigerate our bottle of soy sauce.

The regular type of soy sauce is the most reliable as far as maintaining its freshness, taste, and overall appearance. Other types of soy sauce do not have the combination of those four main ingredients of soybeans, wheat, salt, and water, which along with the fermentation process, renders the “regular” kind shelf-stable after opening for an extended period of time.

Here are some common-sense practices that can help to keep your soy sauce good for a longer period of time:

If you find you have several bottles of soy sauce that have been opened:

Interesting facts about the product and a brief history

Soy sauce, as we know it, was created by the Chinese during the Western Han dynasty (206 BC – 220 AD) and soon spread throughout Southeast Asia as a way of stretching their salt supply for their cooking because salt was at that time a precious and expensive commodity. Japan and Korea each had their own versions of fish-based soy sauce. Still, the soybean-based version became more popular and eventually spread into Europe with the early trade routes, and there is written evidence that soy sauce was being shipped into Europe in the 1700s.

Samuel Wells Williams, who was a missionary and an expert on Chinese culture, wrote that in China, the best soy sauce is “made by boiling beans soft, adding an equal quantity of wheat or barley, and leaving the mass to ferment; a portion of salt and three times as much water are afterward put in, and the whole compound left for two or three months when the liquid is pressed and strained.”

Soy sauce was first produced in the United States in 1908 in Hawaii, which at that time was a territory of the U.S. and not yet a state.

Studies have shown that Chinese dark soy sauce has ten times the antioxidants of red wine, and allergic reactions to soy sauce are rare.

Since the bottle of soy sauce, unlike other condiments in my sister’s kitchen definitely does not have a “Best By” date on the label, I’m going to take it upon myself to discard that bottle and replace it immediately even though the information from Kikkoman also states that soy sauce doesn’t actually go bad, but the quality and taste change over time. That’s enough for me, and I want only the best tasting soy sauce to use on my food.