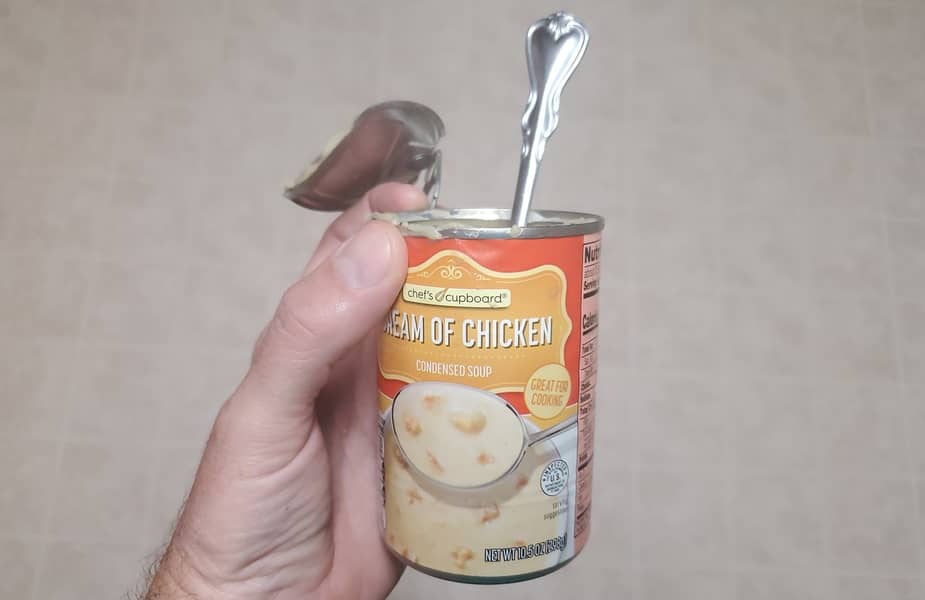 Canned food is safe to be eaten directly from the can without being cooked. An integral part of the canning process requires food to be heated to the point that all bacteria spores are destroyed in the can. That heating process also creates a vacuum in the sealed can, thereby enabling the food inside to be stored at room temperature and directly eaten upon opening the can.

So, the simple answer is, yes, you can eat canned foods without cooking them. The question is, do you really want to? Read on to learn everything you need to know about eating canned food without cooking it, including information about how diseases and food poisoning occur in canned food products.

What Disease Can You Get From Canned Food?

The most dangerous part of consuming spoiled canned food is that you may contract botulism. According to the CDC, botulism is caused by a nerve toxin that is released by a certain type of bacteria. It attacks the body’s nerves causing muscle paralysis, difficulty breathing, and even death.

There are five types of botulism.

Foodborne botulism makes up only 15% of the roughly 145 cases the US sees each year, so it is extremely rare. Further, the majority of this 15% is contracted by consuming food that was improperly processed during a home-canning process. However rare, commercially-bought canned foods can also be a source of the disease, and certain steps should be taking before consuming canned foods to minimize the risk of acquiring botulism.

If a can is dented, pierced in any way or is puffy, throw the can away. Anything that has happened to compromise the integrity of the can will lead to the food inside becoming spoiled.

However, the spores of the bacteria that cause botulism can grow inside cans that were improperly processed, and this will not necessarily result in an observable defect in the can. If the can has not been heated to the required temperature to kill the spores, the anaerobic conditions inside canned food are the perfect environment for this bacteria to grow.

The typical heating instructions recommended for canned food don’t always kill the spores of the bacteria that causes botulism. The food must be heated to at least 250 degrees for 3 minutes to kill the bacteria spores.

Fortunately, the current commercial canning procedures are such that cases from botulism from commercially canned food are exceedingly rare. Food safety standards have improved immensely in the past few decades, and it’s now almost impossible to contract botulism form a sealed can of food.

Can You Get Food Poisoning From Canned Foods?

Although botulism is technically a type of food poisoning, there are a wide variety of illnesses that can be contracted from the consumption of contaminated food. According to the Mayo Clinic, Food Poisoning is defined as a foodborne illness contracted by eating food contaminated with bacteria (or the spores), viruses, or parasites.

Food poisoning is often caused by the transfer of harmful organisms to the food. This typically occurs with raw foods or fresh produce since these foods are not cooked, and the organism is then not destroyed. In the case of raw meat, the organism may ultimately be destroyed when the meat is cooked, but if the handler touches the meat and then does not wash their hands before touching something else that is consumed, the illness occurs.

Although food poisoning comes in many different forms, most symptoms of the illnesses arise within hours of consumption. There are a few symptoms that are typically found in cases of food poisoning.

Most food poisoning can just be left to run its course. The most dangerous of the effects of food poisoning is dehydration, so someone experiencing food poisoning must continue to drink fluids or seek medical help if they are unable to keep liquids down for an extended period of time.

Again, if a can has been damaged in any way, the food inside should not be eaten. If the can is not properly sealed, then the food is basically sitting out at room temperature and will quickly spoil just like any other food that requires refrigeration.

Commercial soups are canned by following strict government guidelines so you can rest assured they are safe to eat right out of the can. However, many people don’t realize that if you are home canning, there is a different procedure to be followed for soups as opposed to non-soup foods. If these procedures are not followed, consuming your soup may put you at risk for contracting botulism.

The National Center For Home Food Preservation has published the following guidelines for home canning soups:

Because home canning of soups is such a specific process and differs from traditional home canning, there is a website that details the official USDA guidelines to follow for safety. Please visit  USDA Guidelines for Home Canning Soups.

However, this is only true if the can is sealed. If you eat from a can with a seal that is already broken, all bets are off. In this instance, you could be exposing yourself to dangerous bacteria like botulism or a variety of foodborne illnesses.

Here’s the takeaway: if it’s sealed, it’s fine. If the seal is broken, toss it.