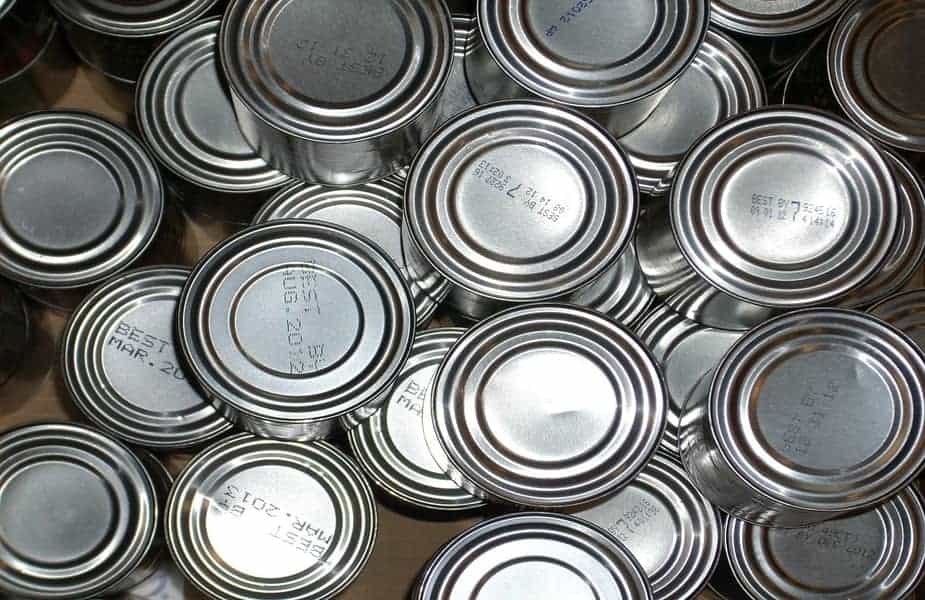 Whether building a survival stockpile of resources or just planning for the next disaster, choosing which foods to store is an important decision. Since canned foods are one of the cheapest options for maximizing calories per dollar, I wondered if it wouldn’t just be acceptable to stock up on nothing but canned foods. I did some extensive research, and this is what I learned.

You can theoretically survive on canned food alone due to the advancements in canning technology in terms of sanitation and variety. However, the foods should be as nutritious as possible in order to give your body all the necessary vitamins and minerals that it needs to remain healthy.

Now, let’s dive into the details of whether you should consider being canned food heavy in your survival stores. I’ll also give you some guidelines on which foods to choose.

Is It Bad to Eat Canned Food Every Day?

Canned foods are very convenient and efficient to have, especially if you do not have the time to prepare meals. This is because the vast majority of them are already pre-cooked and only need to be heated. In fact, they can often be eaten cold right out of the can. They are so convenient that some people might even have them on a daily basis, and this brings up the concern of what can eating only canned food on a daily basis do to your body.

You might be thinking that it’s probably safe to have canned food regularly since harmful practices in the past have been banned or improved. However, other potentially toxic substances were recently discovered. You probably have them in your body right now since many canned food and other products still use them. They are called BPA or bisphenol-A.

These industrial chemicals are often are used as lining for tin cans to act as a barrier in order to limit corrosion and prevent metal particles from penetrating the food. They are also found in the majority of plastic food containers as well as hygiene products.

Are BPAs Really Worth Worrying About?

According to studies, BPA can cause a wide range of hormonal problems that can affect both adults and children. The adverse effects are more pronounced on babies than other age groups where they are reportedly shorter and smaller in size as compared to their unexposed peers.

Also, BPA exposure might increase the risk of developing prostate and breast cancer tissues as well as cause infertility problems for both males and females.

Even so, before you throw away all your canned food and other products, take note that according to Packaging Digest, 90% of food cans no longer contain BPA. Furthermore, some canned food manufacturers might put a “BPA Free” label on their products, so you can also look into that. So, make sure you check through what you already have stored and make sure you are avoiding anything that might have fell through the cracks.

You should also look into the sugar and sodium content of your canned food if you plan on completely living off of it since too many of them might cause health problems such as diabetes or hypertension.

Pro Tip: A good practice should be to thoroughly rinse the contents before cooking them, especially for canned ingredients. The salt content is usually concentrated in the liquid rather than the food itself.

What Is the Best Canned Food for Survival?

If you are in a situation where you only have canned food as a means of survival, then you might have no other choice in the first place than to just eat whatever canned food you might have. However, if you had the time and means to choose leisurely, you should note the following characteristics to ensure that you can survive as long as possible.

What Are the Most Nutritious Canned Foods?

Although canned foods are quite infamous and are known to be the opposite of nutritious, certain exemptions should be on your list when you go to the grocery store. Some of them are listed below:

A Brief History of Canning

Let’s take a look back at some of the problems that the canned food industry faced. Around the beginning of the 19th century, when canning technology was still at its infancy, there were many problems with regards to food and workplace sanitation that was often overlooked in the small canneries where canned foods were mainly produced.

Furthermore, this was the time when refrigeration was yet to be invented, and industrial canning standards were yet to be set, which meant that it was very easy for contaminated canned food to reach the store shelves and ultimately reaching the customers, which often led to food poisoning at the bare minimum.

When these certain conditions improved alongside with our understanding of canning, another problem was determined. Notably, researchers noticed the abnormal lead content of canned products that they traced back to the container, which in this case, is the tin can itself.

Typically, most of the food cans used to be soldered with lead, and this managed to seep through to the contents in a process known as migration in canning toxicology. When you go over the daily recommended limit of lead intake, which is at 12 micrograms for adults, according to the Food and Drug Administration (FDA), this could possibly lead to a fatal case of lead poisoning.

Thankfully, in the United States, the use of lead-soldered cans was stopped in 1991, while the final rule which altogether banned these types of cans, whether for local or imported products, was issued by the FDA in 1995.

I am a canned food junkie, I admit it. I eat some type of canned soup or stew at least 3-4 times a week and often daily. It’s so easy to just pour into a bowl and nuke for 2 minutes. For people like me, who have ridiculously busy schedules, those little cans are a godsend.

Even so, if the SHTF I want to be sure that I have a food stockpile that is diversified. I recommend that you include both dried foods, like rice and beans that have been stored properly as well as lots and lots of nutritious canned foods. Don’t forget to make sure you are covering all of your vitamin needs and never go too heavy on one type of food. Variety is your friend.