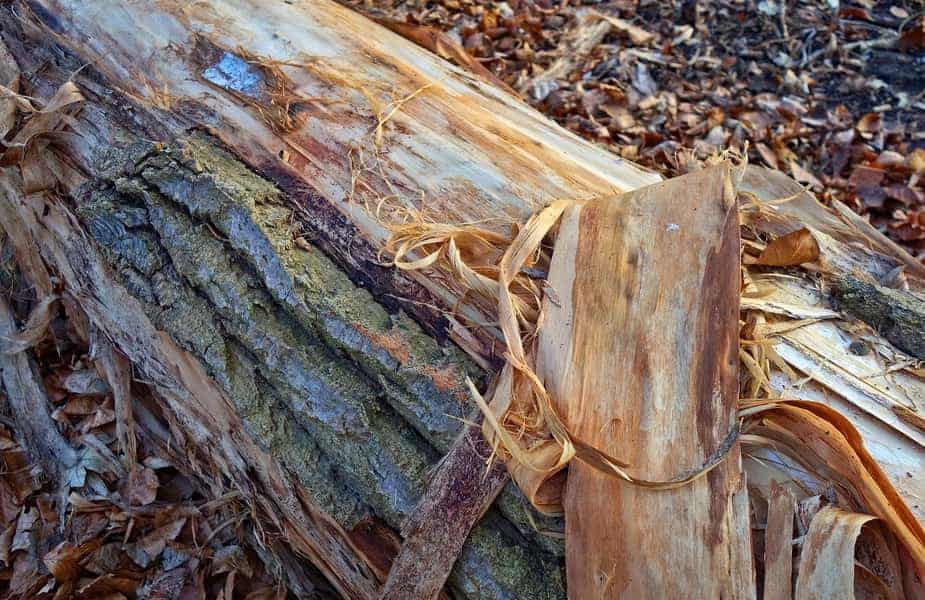 Tree bark is abundant in many regions that you could find yourself in a survival situation. Since it is so abundant I wanted to know if this was a legitimate source of calories so I did some research to find out.

Most tree bark is a safe and nutritious form of food that humans can find in the wilderness and is an excellent source of calories in a survival situation. You just have to be careful not to choose one of the poisonous varieties such as Cherry, Pacific Yew, or Eucalyptus trees.

Now that you know that tree bark can be consumed in a survival situation let’s discuss what kinds of tree bark and the how and why you should harvest and consume it.

Why Would You Want to Eat Tree Bark?

Tree bark is plentiful in many environments and is a quick source of calories if you know where to look. Tree bark provides about 500-600 calories a pound which is quite nutritionally dense for a plant that you can forage relatively simply. Cambium, the edible part of tree bark, contains digestible starches, sugar, vitamins, and minerals alongside a rather impressive amount of fiber to keep things moving.

How Do You Harvest Tree Bark?

Once you have identified the tree with edible bark that you plan to harvest you need to remove the grey outer bark and the greener middle layer of bark to get down to the nutritious inner layer called cambium. The edible inner layer is a bit rubbery and white or cream colored. Harvest the inner layer, but be careful not to go too far or you might be biting into hard inedible wood.

How Do You Eat Tree Bark?

There are several ways to consume tree bark but the most common ways are to:

Boiling Tree Bark is a good option if you have access to a pot and can get some fresh water boiling over a fire. Take the bark and cut or shred it into thin strips and pop them in to make a thin soup and something akin to pasta. Cooking it breaks down some of the tough fibers and makes it easier to eat.

Frying Tree Bark requires a few table spoons of oil or some other form of fat and a frying pan. Take strips of the bark and pop it into a frying pan with a layer of oil for a few minutes on each side and you get something with the texture of jerky. Cooking it in this fashion makes a texture and flavor similar to potato chips.

Making Tree Bark Flour is a bit more involved as you have to try the bark over a fire and grind it into a powder. If you want to channel your primitive side or are in a survival situation you can pound it with a couple rocks. If you do have a food processor or blender handle that is a much easier option. Tree bark powder can be used to add nutrition to any wild game you’ve caught or to make a basic bread or cookie. Tree bark breads and cookies have been gaining popularity in recent years and have been a part of traditional food in Sweden and in Native American cultures for centuries.

Eating it raw might give you a boost of calories to quell a rumbling stomach but it is not going to be the most efficient way to get the calories into your body. However, if you are without time or supplies it might be your only option. Be prepared for a serious jaw workout and to spit out the fibers that you aren’t able to grind down and eat.

Tree bark tastes wildly different depending on the species of tree. For our purposes we can go over the most commonly available tree barks, pine, birch, and slippery elm.

Birch bark is a little bit sweeter than many other edible tree barks and is often used as a flavoring accent due to its taste which is similar to wintergreen. Turned into a bark flour and used in baking it can add interesting flavor accents and provide added nutrition to breads and cookies.

Pine bark is the most commonly used bark available for foraging in the wilderness and is one of the most widespread barks that is cooked and consumed. Pine bark is very chewy and bland when it is raw and still quite bland when it is cooked. Depending on what part of the inner bark layer you prepare you could end up with some resinous flavoring. In order to mitigate that flavor slice it in half and only consume the innermost layer of the cambium.

Slippery elm bark is was once used as a traditional medicine supplement in teas and poultices and now in modern times it is found in powder and pill form. Slippery elm bark has a nutty earthy flavor and can be used to make a thin gruel to take advantage of it’s medicinal properties.

Do people eat tree bark outside of a survival situation? Tree bark is used as a flavoring accent. The most pervasive use of tree park as a seasoning is cinnamon which is simply ground up and dried inner bark of a cassia tree.

Does tree bark get used for anything else? Tree bark is used in traditional medicine, the most popular and well known of which is slippery elm which can be used in many medicinal applications from lozenges to help with coughs to a treatment for diarrhea.