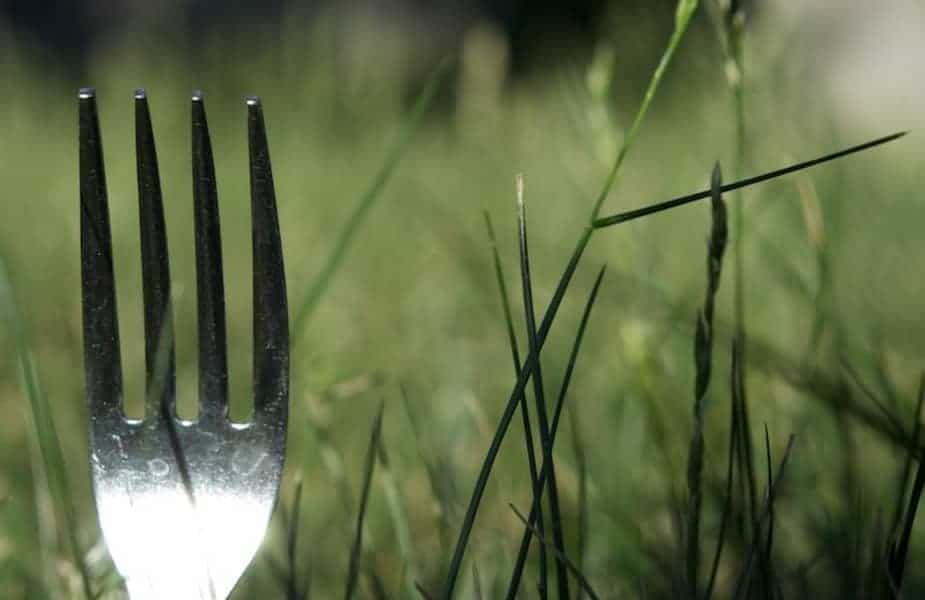 Grass is normally abundant in just about any region you might travel. I was curious if it could be relied on as a temporary means of staving off starvation in a survival situation. So I did some research on the subject and these are my findings.

Humans cannot eat most types of grasses because they contain cellulose which is not digestible to our bodies. This makes it have very little nutritional value for humans. In fact, people often get sick after eating grass.

Now that you know that grass is usually a really poor choice of food, even if you are starving, let’s discuss why this is and cite any exceptions to the rule.

While grass is typically non-toxic, we do not have a digestive system that is designed to handle the high abundance of cellulose contained within. Our system simply cannot break down blades of grass and use it in a meaningful way.

Animals, like cows and goats, have specially designed stomachs that allow them to slowly break down and absorb nutrients from the grass in a process called rumination. Even with a digestive system made for grass, animals still have to eat an enormous amount in order to sustain themselves.

The Road to Dentures

Even if we could digest grass, we would quickly not have any teeth to chew it with. Grasses typically contain a large amount of silica and would quickly wear down the enamel of our teeth. Grazing animals have teeth that continually grow to compensate for this.

So, if you like your pretty smile it’s best to stay away from chewing the cud.

Does Grass Have Any Nutritional Value?

Even if a human could successfully digest grass, it would take a sizable amount to keep us going. Imagine trying to live on cabbage. It’s almost impossible to get enough calories in your body before you fill up on the stuff.

In fact, competitive eaters often “train” by eating large amounts of cabbage since it is about as close as you can come to a negative calorie food that you can get.

Cows have to eat as much as 30 pounds of hay or grass each day just to sustain themselves. Sure, we are 1/4 the size of cows but imagine trying to eat 8 pounds of grass (or cabbage for that matter) each day. No thanks.

In short, unless a species has specifically evolved to obtain nutrition from grass via rumination, then the nutritional value to a specific animal is close to 0.

Can You Cook and Eat Grass?

Cooking vegetables is a great way to soften them up and make them more palatable. Unfortunately, it doesn’t work the same for grass. Cooking it does not break down the cellulose enough to render it edible.

Most vegetables have much lower levels of cellulose than grass, which is why softening them via cooking sometimes makes veggies more digestible. In other words, we don’t cook vegetables to make it go from inedible to edible. We cook it so we can tolerate eating it.

I mean you can eat raw lettuce, cauliflower, and carrots, right? All you would accomplish by cooking grass is to either create wet grass if you boiled it or charred grass if you roasted it. Yummy.

Based on anecdotal evidence from people who have actually eaten it, grass tastes just like it smells. It’s a bit dry and crunchy, similar in texture to green veggies, and tastes of dirt. There’s a reason it’s not on the menu at your local diner.

What Happens If You Eat Grass?

Since a human digestive system cannot break down the cellulose-rich stems of grass, it would just pass through (hopefully) your system and come out the same way it entered your stomach.

Grass would likely be excreted from your body looking like chewed grass covered in feces. Not a pretty sight (sorry to gross you out, but you asked).

Will I Die If I Eat Grass?

It is unlikely that someone would die from eating a small amount of grass. However, think about what animals do in the grass all day long. They defecate, urinate, and roll around in areas where grass normally grows.

Therefore, it is not necessarily the grass itself that you have to worry the most about when eating it. Harmful bacteria and microbes are often attached to grass blades.

Wild Grasses That Can Be Eaten

As with anything, there is always an exception to the rule. I mean you already know that most people eat grass every day in the form of cereals or grains. However, you probably aren’t going to be able to find or be able to process this type of thing in the wild or in a survival situation.

Even so, there are a few edible grasses that are worth mentioning if you know how to identify it:

The moral of the story here is that it’s really difficult to find edible wild grasses. While there is no such thing as bad knowledge, there are much easier foods to find. In fact, it might be best to rule out eating grass at all just to be on the safe side. Your time is better spent searching for low hanging fruit, literally.

You Can Cook and Eat the Seeds

If you find grass that has seed heads present, you can gather them to eat. However, occasionally you will run across varieties that are toxic to eat raw. To be on the safe side, it’s best to cool the seeds before consuming.

Also, look out for grass seeds that have a purple or black color to them. It is very possible that this is a poisonous mold that could kill you. The seeds should have a brown or green color.

While eating grass is not a great choice to stave off starvation, there are typically several edible options that grow in the same space as grass that can increase your chances of survival. Here are a few:

While found in abundance, grass is an edible option that should never be partaken of. The good news is that there are almost always much better options in the wild just waiting to be taken advantage of. All it takes is a bit of knowledge and nature will provide.

Can humans eat tree leaves? Similarly to grass, the leaves found on trees tend to be high in cellulose. Besides being low in calories and nutrition as well as often being covered with a waxy coating makes them a poor choice in a survival situation.

Can humans eat hay? Drying out grass in the form of hay does not break down the cellulose. Therefore, similarly to grass, hay is not edible for humans.

Can you eat wood? Humans can eat wood, however, we do not have a digestive system designed to handle it. “Ruminants”, like beavers, deer, or moose can get away with eating bark and wood due to their specialized multi-chamber stomachs specifically evolved to digest and maximize the nutrition gained from doing so.

link to White vs Yellow American Cheese | Is There a Difference?

The big question on everyone's mind is whether white and yellow American cheese is the same thing. Okay, I'm kidding, but it is something that I have often thought about when grilling up some...