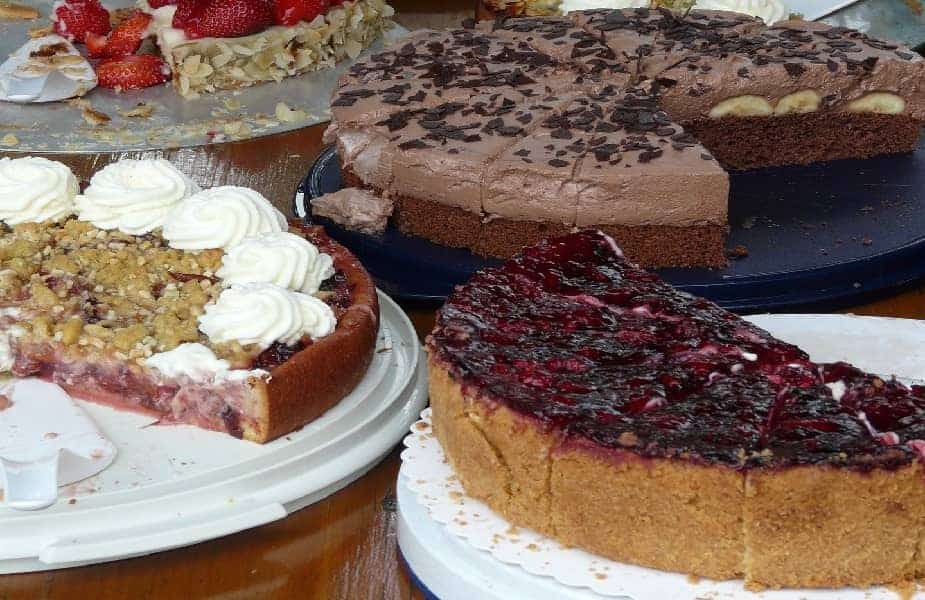 Cakes are a great way to feed several people at a gathering and people often wonder if they can be left out or if they need to be refrigerated. This is because, more often than not, you will have a surplus, since you have to make such a large quantity all at once. I’ve been baking all my life and can give you a definitive answer.

Because there are several different ways to make cake, there isn’t necessarily a hard and fast rule about which needs to be refrigerated and which can sit out at room temperature. To help you figure things out, this article will give you some guidelines about when you should and shouldn’t refrigerate your leftover cake.

It’s All About the Ingredients

The shelf life of cakes depends on what you put in it. A plain cake such as vanilla, funfetti, or king cake that doesn’t have frosting on it or fillings should last for several days or even a week on the counter. This is because the sugar in the cake acts as a preservative, and there aren’t any fresh ingredients that will quickly spoil. Box mixes typically contain preservatives, so if left unfrosted, it will definitely last almost a week sitting on the counter.

Just make sure that you have a really good cake storage container, like my favorite one found on Amazon, to help maintain the freshness.

An unfrosted cake can be kept for about two or three months in the freezer. When you are ready to frost it, thaw the cake out in the refrigerator and put on the frosting shortly before you are ready to serve it.

Cakes with fresh ingredients or frosting may benefit from refrigeration, although it’s not exactly necessary. Again, the rules of cake refrigeration aren’t black and white. Cakes such as carrot or pineapple upside-down cake contain perishable ingredients, so it is best to keep them in the refrigerator; however, they can last one or two days on the counter at room temperature without spoiling.

If you bought a cake refrigerated, then you should keep it refrigerated. Ice cream cakes and “icebox cakes” are intended to be cold, so they should remain that way. The cakes could melt or spoil if they are left at room temperature, so you should only keep them out long enough to cut and serve to everyone.

If a frosting contains eggs or dairy products other than butter, it should be refrigerated immediately and only left out while you’re serving the cake. Dairy products create moisture that will cause bacteria to grow rapidly. Refrigeration slows down the growth of bacteria, which is why it’s important to refrigerate immediately.

When in Doubt: Refrigerate

If you’re not sure if you should put your cake in the refrigerator, go ahead and do it. It’s better to be cautious than to risk getting everyone in your group sick from spoiled ingredients. Some bakers don’t recommend refrigerating pastries and cakes because it creates too much moisture, but it shouldn’t create so much that it ruins the cake.

Refrigeration can also be beneficial for cooling down cakes. You can cool down a cake faster to frost it or keep a frosted cake in the refrigerator to prevent it from melting when the kitchen gets too hot.

No Two Cakes Are the Same

As mentioned before, different cakes have different ingredients that require certain care when it comes to preservation. So, let’s take a look at some popular cakes and how to store them.

Cheesecake is unlike the typical cakes that have been discussed in this article so far. It has a dairy base instead of a flour base, so it must be refrigerated shortly after it is baked. Since it contains eggs, baking is required to cook them, but it must be kept cool in the refrigerator, so it doesn’t spoil.

Dairy and eggs contain protein and moisture, which is the perfect climate for rapid bacterial growth. Refrigeration will slow down this process. You should never eat a cheesecake that has sat out for several hours. Bacteria can be present without being visible, so you shouldn’t take a chance on the cheesecake that’s been sitting out all afternoon.

Carrot cake should always be stored in the refrigerator because its ingredients make it susceptible to mold. Store this cake with plastic wrap or a zipping plastic bag in the refrigerator. The carrots create moisture, which encourages bacteria to grow, especially if it is kept out on the counter in a warm or humid room.

Carrot cake typically has a cream cheese frosting, which is one of the frostings that should always be refrigerated because of its dairy content.

You can keep this cake on the counter while you serve it, but it should promptly be put away once everyone has gotten a slice. Like other cakes, this one should last in the refrigerator for no more than a week. It will also last several months in the freezer. You may want to get a more compact container specifically designed for freezing cakes and pies, like this Amazon model.

Pineapple upside-down cake should be refrigerated and eaten quickly. This fruity cake is usually made with pineapples and cherries. Whether the fruits were fresh or canned, they make the cake highly susceptible to mold and bacteria. You can keep it on the counter for just a day or two, but no longer than that.

When storing it, cover it in plastic wrap before placing it in the refrigerator. Because this cake is sugary and wet, you should use toothpicks to prevent the wrap from touching the cake. Be sure the wrap covers the entire cake and doesn’t let any air inside. This cake will only last about three days in the refrigerator because of its perishable ingredients.

You should refrigerate cakes that:

You don’t have to refrigerate cakes that:

Always refrigerate a cake if you are worried about how long it will keep. The refrigerator may add some moisture to the cake, but it shouldn’t be enough to affect the texture or taste.

Freezing a cake will keep it fresh for up to eight months. Always thaw the cake in the refrigerator, so excess moisture will not cause the cake to become mushy. Freeze a cake and frosting separate, so there will not be a chance of changing the texture of the cake.

Here is a summary of a few products that you may find useful in keeping your cakes fresh: