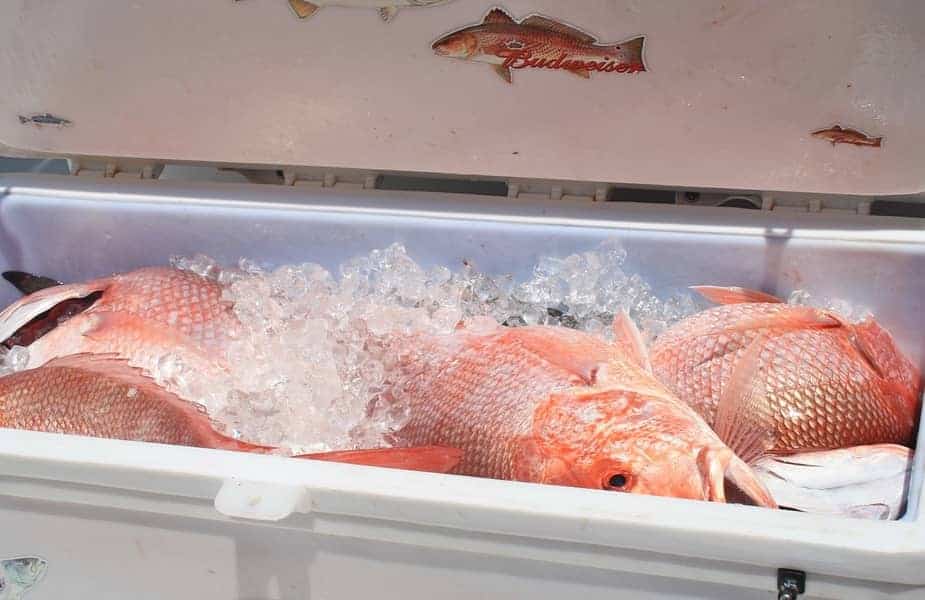 How long fish can be kept on ice is a common question. While growing up, my father and I had some long fishing days that lasted sunup to sundown. Would those fish caught in the morning and put on ice stay fresh throughout the day? I looked into the matter and can give you a definitive answer.

Ungutted fish that have been properly bled out can be kept in a cooler filled with ice for at least 1 to 2 days. If gutted, a fish can stay in good condition for up to 5 days or even longer if kept chilled. Frozen fish, on the other hand, will not spoil if consumed within 3 to 8 months.

The rest of the article will go into greater detail on keeping fish fresh, tell you how to know if a fish is spoiled, and give my recommendation on the best container to store the fish you catch.

How Long Can You Keep Ungutted Fish on Ice Before They Spoil?

First of all, you have to prepare your storage container. Your best option is a plain old well-insulated foam cooler. This way, you can fill it with ice and not worry about it melting while you are fishing. You might also want to add rock salt to make it melt even slower.

Should You Gut the Fish Before Putting Them on Ice?

This is all about personal preference. I personally never gut fish on the water, since I feel that part of the process is better done right before cooking. When I am out fishing, I am out fishing. There is plenty of time to process them later.

You can put non-gutted fish on ice just as-is, and they won’t go bad fast enough to be a concern. However, if you plan to keep them on ice for several days, you will be better off gutting them immediately.

Generally, ungutted fish can stay fresh and preserve its taste for about 1 to 2 days inside your ice-filled cooler. You can extend this duration for another 1 to 3 days if you keep it inside the fridge. On the other hand, gutted fish on ice can last for 5 days or more.

Live Well Versus On Ice

Once you have reeled in your catch, you have two options. You can either:

Either way, you should observe one of the humane and ethical methods of killing them. In fact, it’s illegal in many places to let them suffer during their slaughter.

How to Properly Kill Fish

There are currently two acceptable methods that you can use to render a fish unconscious before killing them.

Like other animals, fish need to be bled out to inhibit the growth of harmful bacteria. Bleeding can also keep them fresh longer. To do this: (after the fish had been rendered unconscious, of course)

You will immediately know if you cut the right place if there is a lot of blood coming out of the area. If not, just do it again until you succeed.

Here is a short tutorial on how to bleed saltwater fish. The principle is the same for freshwater fish as well.

Once your fish has bled out, you can now put them on the cooler to be processed later. Or, you can go ahead and gut and filet them immediately.

How Can You Tell if Fish Is Spoiled?

If a fish is going bad, you will notice discoloration or a funny taste after cooking. Of course, you usually don’t get this far since any food on the verge or in the middle of spoiling will have a nasty and noticeable bad smell. For fish, this is even more apparent.

A spoiled fish will also have very slimy skin. Also, check the color of the gills. If they are red, the fish is probably still fresh. However, if there is a brownish or purplish in color, don’t hesitate to throw the thing out.

What Is the Best Container to Store and Transport Fish?

For transporting fish, either fresh or frozen, you can use a simple insulated cooler in order to maintain the necessary temperature. There is nothing wrong with choosing the cheapest option possible, such as a foam cooler. After all, the thing will get stinky, and you will score brownie points with your significant other if you just make it a one time use thing and throw it out after every major fishing trip.

To store fish, wash, and wrap them in aluminum foil. Then, enclose them in an airtight plastic container. You can keep fish in the freezer for up to 8 months or the fridge for up to 2 days.

Fishing is one of those things where you not only have fun, but you also have a way to feed your family afterward. However, unless your house is near your fishing spot, you need to take some extra steps to keep the fish as fresh as possible.

I hope this article has given you all the info you need to make sure your hard-earned catch stays as fresh as possible before you can get back and fry it up. Thanks for reading!