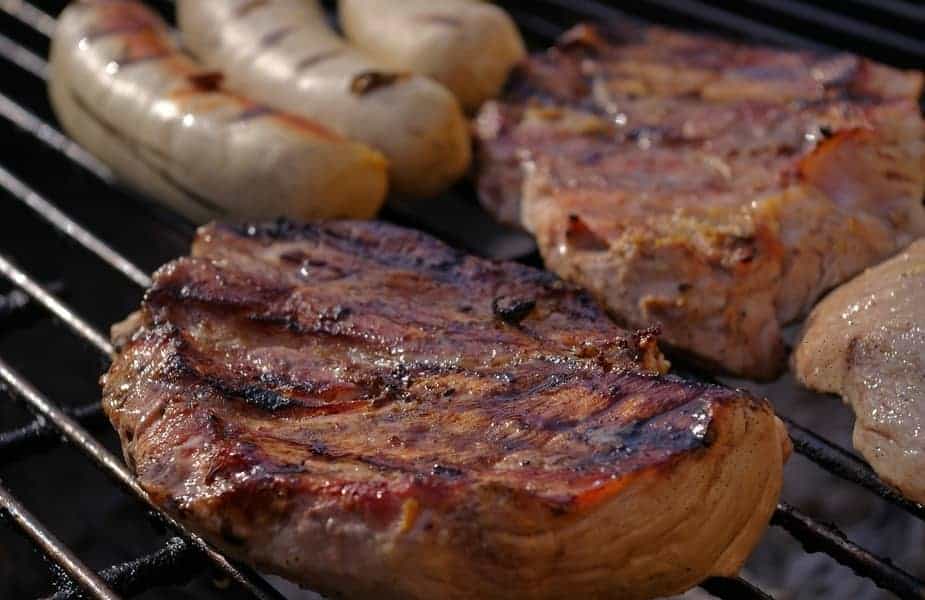 Nothing beats the smells and tastes of grilled foods. For this reason, I like to only grill with charcoal. Often, this means we sometimes end up with a bit of ash settling on the food. I have often wonder if this could be any cause of concern, so I looked into the matter and this is what I learned.

It is generally safe to eat food with small amounts of charcoal ash on it. However, to be entirely sure, it is best to use organic charcoal products instead of briquettes since their ash is generally much safer and environmentally friendly.

In the grand scheme of things, eating minimal amounts of ash is not something to be concerned with. In fact, some cultures purposely add ash to their cuisines to add more depth and flavor. Even so, let’s go into more detail so you can make an informed decision on whether you want to clean it off somehow or just eat up.

Is Charcoal Ash Bad for You?

There are few things better than barbecue season. Whether talking about just your plain old regular grilling sessions or hardcore smoking competitions.

Regardless of how good it tastes, no one wants to eat something that could potentially cause harm either over the short or long term. Therefore, it is essential to keep an eye out for any signs of the following cases to keep you and your family safe while enjoying those delicious grilled foods.

Charcoal Ash Is Not Coal Ash

Just to put this out there first, coal is different from charcoal. So, if you come across or read something about coal ash, they’re talking about the ash left behind from burning coal. This has no association with charcoal or charcoal ash whatsoever.

Coal ash is inherently dangerous as it not only pollutes the environment; it might also cause a wide range of problems ranging from kidney disease to cancer once ingested.

Charcoal ash, also known as wood ash, is the residual powdery substance that is left behind when you burn wood or charcoal. The particles are so fine that they can be airborne and travel along with the smoke produced from burning charcoal.

If inhaled, charcoal ash could possibly cause lung irritation or even, in rare cases, damage lung tissues. This could potentially lead to serious respiratory problems. Those with existing lung conditions such as allergies or asthma are even more vulnerable to the effects of charcoal ash.

Even so, complications from charcoal ash are not typical nor something to be worried about unless you are going out of your way to breathe the stuff in.

Never do the grilling inside closed or partially closed spaces and stick to open areas only to minimize the danger of carbon monoxide, one of the chemicals produced when you burn charcoal.

As you probably know, carbon monoxide is an invisible gas that is highly toxic. This is not something to fool around with since it can cause nausea at best, death at worst.

Some homes in the past had a heating system that were powered entirely by charcoal. This sometimes led to cases of carbon monoxide poisoning. Homes have long since stopped using charcoal. Even so, they have carbon monoxide detectors that come standard with the house, just in case the stuff gets in.

In a study conducted by the American Cancer Association, meat that has been cooking or grilling under very high temperatures can produce chemicals that are considered carcinogens. This is especially true for the parts of the meat that have been burnt black. The concentration of harmful chemicals will be most significant in those scorched areas.

Even so, before you panic, the tests were only conducted on lab animals, and there is still no legitimate research done on humans as of yet. However, it’s better to stay safe than sorry, so it’s never wrong to be cautious. So, while some of you may enjoy the taste of charred meat (I’m one of them), I recommend forgoing that pleasure until the science is clearer.

Can I Just Clean the Ash off and Eat the Food?

For many people, getting ash on your food can certainly ruin your appetite. But did you know that some cultures purposely add ash to their food? It is known to improve the flavor, and some prefer their food with the stuff added in.

Of course, if you are not too keen to try out ash with your favorite steak, you can easily brush it off using a clean paper towel since ash tends to stick to the meat’s fat or oil. Paper towels usually easily absorb the excess oil along with the ash contained therein.

While you are at it, you might also take the time to cut off the charred parts since, as we previously discuss, they are significantly much more dangerous than those streaks of ash.

How Do I Keep the Ash From Getting on My Food?

Completely eliminating ash from food is difficult. This is because ash is very fine and easily gets airborne, some of which inevitably settles on food. Even so, many modern grills are designed to minimize and control ash to a significant extent. On the other hand, traditional grills are often much simpler in their design and do not have sophisticated features like this. So, if you are really particular about the ash content in your food, you might want to invest in a new grill.

Or, you can learn a few techniques to help keep ash from getting on the food. The easiest one is to use a spray bottle filled with water and use it to immediately get the ash off of your food as it cooks before it has a chance to set in.

You might also want to look into smokeless grills. They use electricity instead of charcoal, so there is literally no chance for ash to penetrate your food unless someone purposely sprinkles it all over. This is also a much more environmentally friendly option and poses little to no respiratory hazard to you and your loved ones.

What Is the Healthiest Charcoal to Use?

The healthiest options are often directly linked to more expensive choices. If you want to make your grilling experience healthier and more environmental-friendly, avoid charcoal briquettes at all costs. In its purest form, Charcoal lacks plasticity, which means that it cannot be molded into shapes.

Ever notice how charcoal briquettes are almost uniform? That’s because their manufacturers add binding materials to the fine charcoal particles in order to shape them into that familiar form. However, those binding materials produce all sorts of harmful chemicals once combusted, which you should never put into your food. These materials also do not completely combust, contributing to additional dust content.

Therefore, your best option is to look for charcoal products that have the all-natural or 100% organic label plastered all over it. Real organic lump charcoals are made only from trees with no other materials or additives mixed in. For the most part, organic charcoal produces significantly less ash than briquettes. And as a bonus, they also often offer various flavor choices based on the type of wood used.

Personally, I don’t mind a bit of ash in my food. I like to smoke ribs occasionally, and there always seems to be a bit of ash on the meat. If I notice large particles, I just pick them off. Otherwise, I have never had a problem just slathering them with sauce and chowing down. I guess it all comes down to personal taste.

One thing I do refuse to do, is cook on a rusty grill. Yuck.

I hope this article has been informative. Thanks for reading!