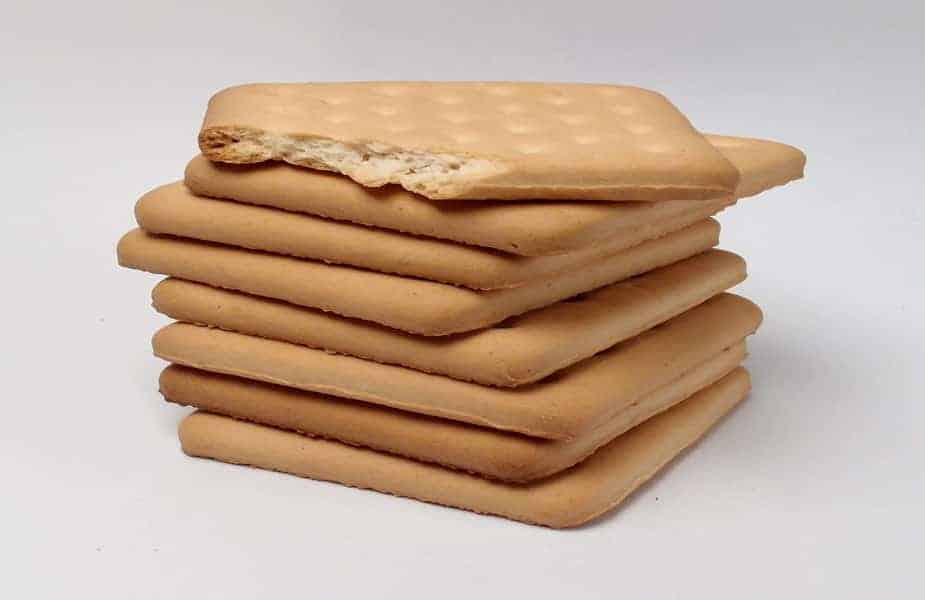 Hardtack is one of the oldest and easiest to make foods in the world. I was curious about whether it would make a good survival food and whether the nutritional value was adequate for sustaining people long term. So, I did quite a bit of research and these are my findings.

Now that we know that hardtack is actually a surprisingly great survival food, let’s take a closer look at the details.

Hardtack is made of grains and is high in calories to help your body build energy in times of high strenuous labor. While not as high in nutrition, think of Hardtack as the MRE (Meal Ready to Eat) of our forefathers, the first making of survival food.

Now if you were to go off of a healthier diet that doctors have created for people of the present day, then Hardtack does not have all the healthy ingredients you need to have to be a healthy individual. But Hardtack does have enough to get to survive, as shown by early sea voyages to the New World from Europe.

There was such a large oversupply of Hardtack during the Civil War that the leftovers helped feed troops in the Mexican-American War as well. That was over 30 years later!

So if people eat modern-day fast food on a daily occurrence then you definitely can eat Hardtack and stay healthy as well. This bread is chocked full of carbohydrates which will give you that great energy boost all day.

How Many Calories Does Hardtack Have?

After looking at numerous recipes of Hardtack with an average piece being as big as three inches by three inches, you will be looking at roughly 75-125 calories depending on the flour you use.

Generally, hardtack tastes really bland since it is basically made from flour, water, and sometimes salt.

How to Make Hardtack Taste Better

This is where many people vary in their tastebuds, but common ways to make Hardtack taste good is with beverages. Using your coffee or tea, you can dip your Hardtack into the drink where it will not only make it taste better but it will soften it up as well. That way you do not crack a tooth on the hard substance.

Over in Sweden, you will see people top their Hardtack with jam and preservatives, giving the bread a more cracker appeal. You can always change the ingredients to the Hardtack, like change the water to milk.

There is also the option of using different flour or adding sugar as the Swedish did to their Hardtack. That is the great thing about such a simple recipe, you can change the ingredients and it will still be the filling food it has been for generations.

What Do You Eat With Hardtack?

Hardtack is just like anything else, you can eat soup with it or put some jam on top to eat as an hors d’oeuvres. British sailors would make clam chowder out of the Hardtack and so would many other people.

That is the great thing about this bread, it is cheap to make, easy to store due to the bread not needing any refrigeration. The density of the bread made it where it could go from major temperature shifts and not be bothered. In the case that it was the cooks would just bake the bread again.

How Do You Soften Hard Tack?

The most common food to have with Hardtack was something that you could dip it in to soften it up. There is a new way that you can eat it as well but it does have a much different taste. This would be by letting the Hardtack soak in water or milk for 13 to 16 minutes.

Of course, the taste will change depending on what milk you use as in Almond Vanilla milk or Banana milk. After it is done soaking you can then fry it in a skillet with butter. The butter would give the bread a little sweet taste on the outside. Then you can eat this fried Hardtack with soup or cheese as well.

What Exactly is Hardtack?

Hardtack is basically the simplest form of bread possible. It is made from the basics of flour and water. Often it also includes some salt to help add to its longevity and to give it some flavor.

The name comes from the root word “tack”, which is a British slang word that was used by sailors meaning food. So basically it means, “Hard Food.”

Hardtack has been called many different things through the ages. A few examples are:

As you can see, the people who have been forced to eat these archaic “MREs” have never really had a fondness for them. They were but a necessary evil for survival.

Can You Make Hardtack With All-Purpose Flour?

Hardtack can be made with All-Purpose Flour, Wheat Flour, Almond Flour, and all others as well.

By changing the ingredients with another flour or instead of water using milk you will change the taste of the end product, and the shelf time of the Hardtack as well if you use milk. In the case, you only change the flour from raw to All-Purpose your Hardtack will turn out fine and will have the same shelf life as they did thousands of years ago.

That is the great thing about this recipe is so simple and easy to change if necessary.

The best use of hardtack is in extending the life of flour. When your flour is nearing the end of its shelf life, you can extend its life indefinitely by using it to make hardtack.

Now put them in a container for 50 years, dip in some soup, and enjoy.

I am kidding, but the stuff really does last basically forever.

A Brief History of Hardtack

Hardtack is a mixture of flour, salt, and water, a simple recipe. Although Hardtack was created in 1801 by Josiah Bent, empires have lived off of a similar recipe for hundreds of years.

The Egyptians had the dhourra cake which was a small loaf of millet bread. Millet is a grain and is commonly used in cereal in Asia and Africa.

Hardtack can be consumed and lived off of for more than 3 months at a time. It was consumed by sailors on sea voyages, soldiers at war, and migrations of people from one country to another. A typical voyage from England to the New World would take around two to three months to complete. Hardtack would have to be made at least six weeks in advance of the voyage.

Military campaigns have been fueled for thousands of years, from the British Royal Navy where the ration for the day was one pound of hardtack and a small gallon of beer. Which a small beer in 1588 England, when they were allowed to drink on Her Majesty’s Royal Naval vessel, had an alcohol content of .5% to 2.8% so just enough to take the bite out of the ocean wind.

Hardtack had to be made very hard at the time of baking due to the humidity and weather it would come in contact with before being consumed. Sometimes the bread would have to be rebaked on the ship before consumption two to four times, depending on how long the voyage was.

By keeping the recipe small and simple this is very easy to throw into your pack before s long hike or snack for the kids at the zoo.

When building your survival stores, don’t be too quick to discount stocking up on some hardtack. While it’s not the tastiest stuff in the world, if the “you know” what really hits the fan, it’s nice to have a food source that you know you can rely on to be edible forever.

In fact, in the event of a disaster of epic proportions, the first thing I’m going to do is gather all the flour I can and go into the hardtack business to trade with other survivors. Seem like a good entrepreneurial thing to do?

Instead of stocking up on or making hardtack, today you’d probably be better off just investing in some pre-packaged survival foods. I recommend the products from mypatriotsupply.com/. The typical shelf life of their products is 25 years!

How Long Will Hardtack Last? As I said, hardtack really doesn’t typically go bad. It’s been well-documented to last over 100 years when made properly. There’s even anecdotal evidence that hardtack was once found in an Egyptian tomb that was still edible. I’m not sure I believe that, but it might be entirely possible in such a dry environment.

What did Anzacs eat? During World War 1, soldiers from Australia and New Zealand generally ate something they called “army biscuits”. It was basically the same thing as hardtack and was similar in texture to your common everyday dog biscuit.