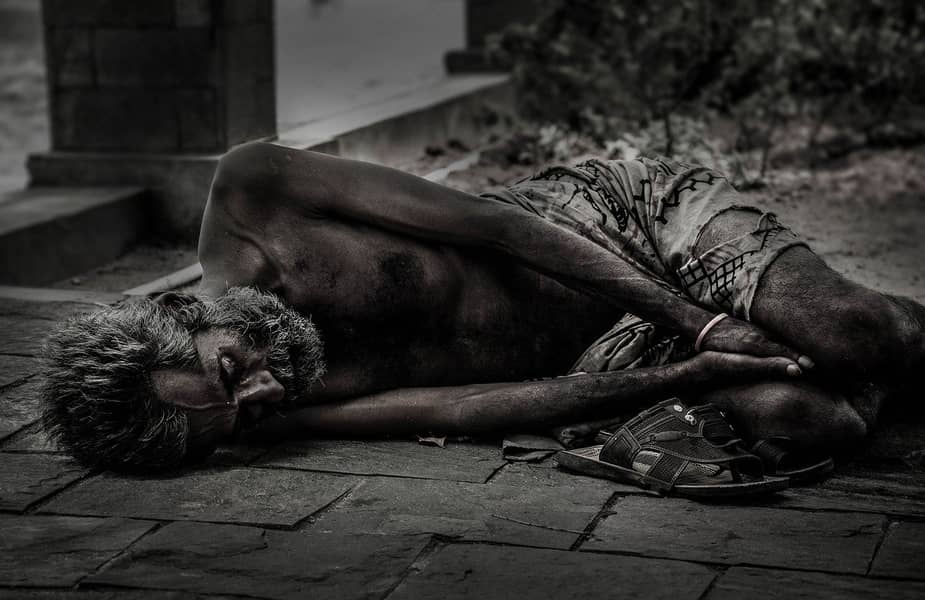 The length of time it takes starvation to kill someone is a common question. There are the rules of three that apply to survival, which provides a guideline on how long a human can go without something essential before death claims them. Three minutes without air, three hours without shelter, three days without water, and three weeks without food. Of course, these general rules have been broken throughout history as humans push their bodies to their limits. So, just how accurate is the three-week prediction you usually hear about?

On average, it takes a healthy adult between 8-12 weeks to succumb to starvation, though it can kill someone in as few as 3 weeks. The timeframe is dependant on weight, health, and age. However, individuals will usually die from dehydration or infection long before the process of starvation completes.

When your body goes without food, it turns to its reserves of sugars, fat, and protein to fuel to sustain itself. While the body can maintain this for a short time without any ill-effects, after time, the body will enter starvation mode. Once this happens, there is only a short window to reverse the process before death is inevitable.

How Long Can You Live Without Food?

The human body has evolved to include defense mechanisms that protect it when sufficient calories aren’t ingested. In many cases of starvation, it is a slow reduction in calories; rarely is it going to a diet of full balanced meals to suddenly nothing. Typically, severe malnourishment like this is due to famine or poverty. Therefore, it can be hard to classify precisely how long it takes from a perfectly healthy individual to die from starvation.

Survivability is based on a person’s fat and muscle stores, their age (children and the elderly will die quicker), and their preexisting health. If a person has cardiac disease, diabetes, liver disease, etc., their biological process won’t effectively turn fat and protein stores into useable fuel as effectively.

A medical study from 2011 estimated that most healthy adults would take between 8-12 weeks to die from starvation. Many people, however, can be severely affected by consuming zero calories per day within three weeks. You begin entering starvation when you have lost 30% of your healthy body weight. At this point, the damage is still reversible. However, once you lose 40% of your normal body weight, death is almost guaranteed.

Starvation or inanition is the term for extreme calorie deficiency and malnutrition. The human body goes through stages of using up its fat and muscle reserves to compensate for the lack of nourishment. Eventually, your reserves can no longer sustain life, and you will die.

When a person suffers starvation, there are three stages that everyone goes through before death. This is a biological process that the body works through to keep itself functioning without food.

In the absence of sugars from food, blood glucose levels have to be maintained by several processes. In the first few hours, the minimal stores of glycogen in the liver are broken down into glucose. Once all the glycogen is used, the body turns to the stores of fats and protein to produce sugars.

Fats can be turned into glycerol and fatty acids. Skeletal muscle can use fatty acids as a source of energy, which frees up the glycerol that converts to glucose to be reserved for the brain.

Unfortunately, glycerol only makes small amounts of glucose, so the body can’t survive on fat reserves alone. Consequently, it turns to proteins in the body and breaks them down into their building blocks of amino acids. While some amino acids can be used as energy directly, most are used to create glucose.

Phase one usually lasts a week.

The second phase is the longest of the starvation process. Its duration is dependant on the fat reserves of the individual. In this phase, the brain starts to use ketone bodies in conjunction with glucose for energy. The ketone bodies the brain feeds from are made by the liver metabolizing the fatty acids. Due to this switch in the brain’s energy consumption, protein breakdown isn’t as prevalent as it was in phase one. However, non-essential proteins are still broken down and consumed during this phase.

Phase two is the turning point for starvation survivability. If you are still in this phase, the correct approach to diet can guide an individual back to health. However, if you proceed into phase three, it is improbable that you will survive.

Once all the fat reserves have been depleted, the body has to rely on the remaining protein reserves for energy. Muscle mass deteriorates rapidly at this point, including heart muscle, and essential proteins for cellular function are consumed. Organ damage is irreversible, and if you haven’t died from an infection or metabolic acidosis, you will lose your life to heart failure very quickly now. The heart fails either due to arrhythmia from the lack of electrolytes or failure due to tissue degradation.

The process of starvation wreaks havoc on the human body. The sufferer will experience a variety of symptoms as the process proceeds.

As starvation begins, a person will start to feel lethargic and begin to withdraw from others. Despite water being essential, the signaling for thirst is compromised, and consequently, many die from dehydration before the starvation process completes.

Over time, a starving individual will sleep extensively, become listless, irritable, and have apathy for life. There simply isn’t enough energy in their bodies to enable physical activity. Your body is doing everything it can to preserve the energy resources it has. Movement is also painful as the muscles start to atrophy.

Slowly you will notice the lack of nourishment on the exterior of the individual too. Their skin will become flaky, and itching by the sufferer can break the skin and be a natural site of infection.

Eventually, the body cannot fight infections due to a lack of vitamins and minerals in their bloodstream. As a result, most people undergoing starvation die from an infection or disease caused by malnourishment.

You may have seen starving children during a famine with enlarged stomachs, which is due to the disease kwashiorkor. In sufferers, the abdomen distends as it fills with fluid, or due to the liver becoming fatty and enlarged. It is a result of severe protein deficiency.

Starvation is a process of the body using its reserves to survive when an individual is not consuming food. There are three distinct phases to starvation, and it can take up to twelve weeks for the process to complete. It is most likely, however, that a sufferer will succumb to an infection as the body’s defenses decline before starvation can destroy the heart resulting in death.

Is Extreme Fasting A Good Method For Weight Loss?

No. Extreme fasting, termed anorexia, is an incredibly unhealthy method for losing weight. Your body will not only consume fat but muscle too. Anorexia is an eating disorder where calories are restricted for a sustained period. The consequences are a loss of bone density, infertility, heart disease, and death. The healthiest way to lose weight is to eat at least 1,200 calories a day for a woman and 1,500 calories a day for a male and aim to lose 1-2 lbs per week with a calorie deficit. By controlling weight loss in this manner, you will not degrade your muscles, and your organs will not be compromised.

What Is A Hunger Strike?

Hunger strikes are a form of peaceful protest. The person forgoes food (and sometimes water) to earn public support or awareness for their cause. It is a long-standing tactic and dates back to around 500 BCE in India, where Bharata underwent a hunger strike before Rama. There are also documented cases in Ireland from two thousand years ago where protesters would fast in front of their adversary’s home. The longer a hunger strike persists, the more significant the attention it receives. To date, the longest hunger strike was 16 years by Irom Sharmila from November 5th, 2000, until August 9th, 2016.

link to 8 Practical Ways to Purify Water Without Boiling It

It's no secret that our bodies need water to survive. But in an emergency situation, it can be difficult to find the stuff. Then, most of the time there is a good possibility that it won't...

Continue Reading
link to Can You Eat Canned Food Without Cooking It?

Canned goods, like all foods, are required to have an expiration date printed on the packaging, and that lets the consumer know how long the food in the can is safe to consume. Typically there are...