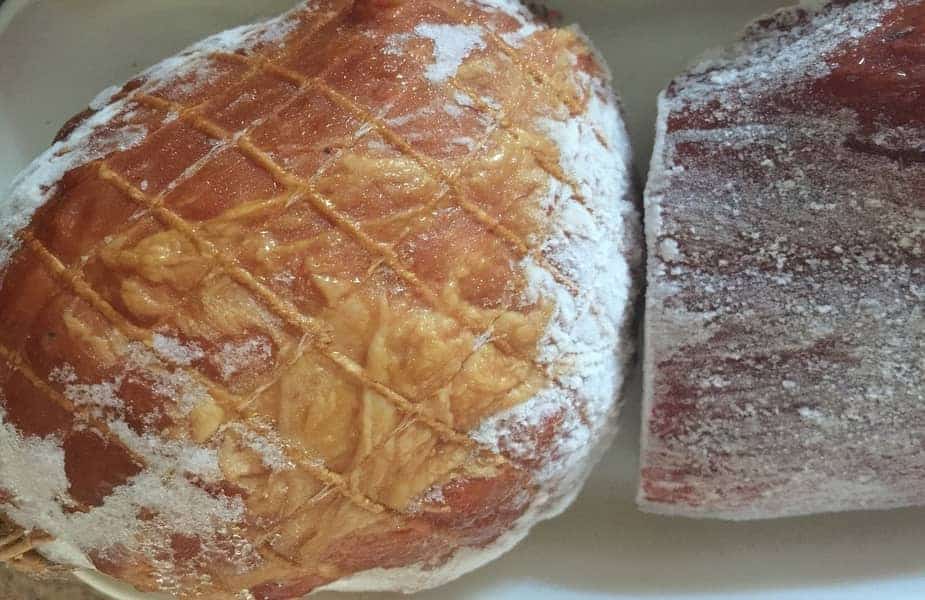 Ham is something most people always like to have on hand. In fact, it’s easy to overstock it and wonder if it will last long enough to get eaten in time. I have done the research for you and will tell you exactly how long ham will last in the refrigerator or frozen.

The freshness of pork depends on several factors. These factors include:

The rest of this article will serve as a guide for describing how long each major type of ham can go without spoiling — and how best to store and preserve the different types. So, let’s take a deeper dive into the details on the shelf life of ham.

How Long Will Raw Ham Last?

But in the case of both fresh and cured ham, it has not been heated cooked at home. They are, therefore, both considered raw.

Uncooked ham — fresh and cured — can be stored in the refrigerator or freezer. It is not recommended that you leave uncooked meat of any type at room temperature for more than 2 hours, especially if uncured. Chill in the fridge or freeze immediately, if possible.

How Long Uncooked Ham Lasts in the Fridge

Due to the temperature of fridges varying, I recommend using a Digital Refrigerator Thermometer if you are unsure about temperature and humidity.

How Long Uncooked Ham Lasts in the Freezer

How Long Will Cooked Ham Last?

Cooked ham can be:

Usually, after heating, ham is served, and any leftovers are stored in the refrigerator or freezer. The cooked ham may also have been left out at room temperature after heating.

If ham is cooked and then left out at room temperature, it is still good within two hours. Just keep in mind that at temperatures between 40 to 140 ° F, bacteria can grow rapidly.

After 2 hours, the ham will spoil quickly. It should be thrown away as bacteria can proliferate and render the meat unsafe.

How Long Cooked Ham Lasts in the Fridge

How Long Cooked Ham Lasts in the Freezer

How Long Thawed Ham Will Last

If you are thawing frozen ham that has already been cooked, it will last 3 to 4 days if thawed in the refrigerator. If the frozen cooked ham was thawed in the microwave or thawed using cold water, it should be eaten as soon as possible.

How Long Can You Eat Ham After the Sell-by Date?

How To Tell If Ham Has Gone Bad

Here are some ways to tell if your ham has gone bad:

How To Properly Store Ham

Ultimately, the shelf life of ham will depend a lot on whether or not it is stored correctly. The most important key is to use airtight storage and freeze it if you don’t plan to consume it in the next few days.

To store raw ham in the refrigerator, store at temperatures between 34 and 38 0 ° F and in the fridge’s coldest area. If it is cured and packaged, it should be okay within its expiration date.

If it is fresh (uncured) and in the refrigerator, try to leave it in its original packaging. If it leaks, try to wrap it tightly with plastic wrap or in an airtight container or bag. The idea is to cover ham tightly, exposing it to as little air as possible. However, the sooner it is cooked, the better. If it shows signs of spoiling, throw it away.

Freezing raw ham should be done as soon as possible. It is possible to leave fresh pork in its original packaging, but even better to wrap it tightly in freezer wrap, a freezer-safe container, or freezer-safe bag. Use a double layer of wrap to prevent air and moisture from entering. Again, keep at a constant temperature below 0 ° F.

To store cooked ham in the refrigerator, store within two hours of cooking. Use shallow airtight containers. Alternately, wrap tightly with heavy-duty foil or freezer wrap.

To store cooked ham in the freezer, store within two hours of cooking. Wrap tightly with freezer wrap or a freezer-safe container—place in a freezer with a consistent temperature of zero degrees Fahrenheit or less.

For your convenience, here are a few products mentioned in this post:

If you are like me, you probably tend to buy meat based on what happens to be priced the best at the current moment. This can lead to buying a bit too much of any one type of meat. Last month, for me it was ham. In fact, I ended up buying a deep freezer so that I could fit all of it into storage.

No matter what your reason for wondering about how long ham lasts, I really appreciate you stopping by for awhile. And, if you happen to be in the market for long term emergency food solutions, I recommend My Patriot Supply.