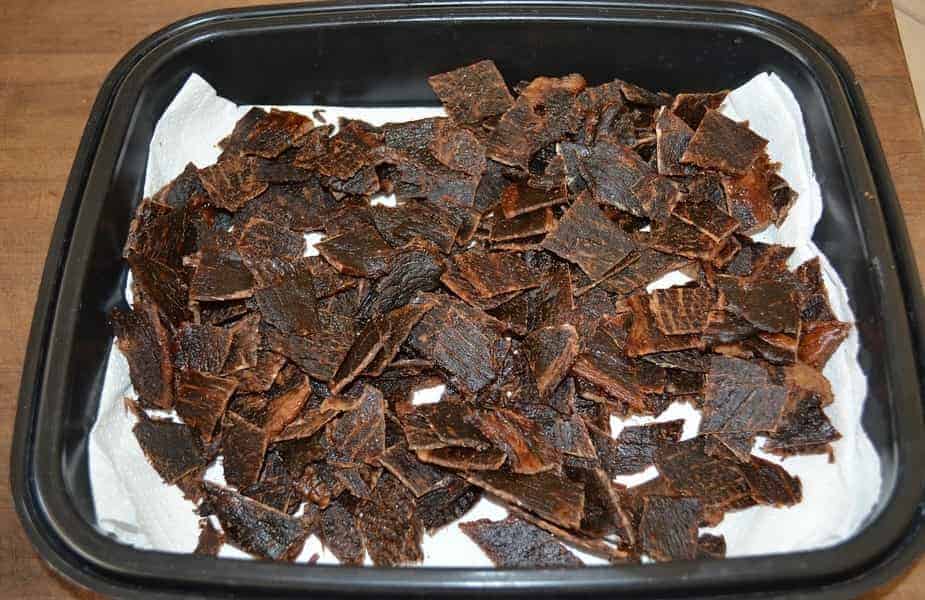 Today, jerky is a popular food item for outdoor enthusiasts and survivalists. It can be made from nearly any type of lean meat and even fish. It’s inherently designed to remain edible for a long time. We know that. But exactly how long will it last?

Just keep in mind that homemade jerky that has not been vacuum packaged will only last about a week in the pantry, so it should be stored in the refrigerator and consumed soon after preparation. Also, once a package of homemade jerky has been opened, it should be consumed within the week.

The rest of the article will cover the basic storage guidelines of jerky and the details of how to preserve it properly.

Does Beef Jerky Need To Be Refrigerated?

Historically, jerky was a method of meat storage in the absence of a means of refrigeration. Jerky can be kept for weeks or months because the drying and preserving process has removed the moisture that generally interacts with bacteria and fungal enzymes that causes meat to spoil.

Therefore, jerky does not need to be refrigerated and will keep for a significant period without refrigeration. It was invented or developed, for this very reason.

How Long Does Jerky Stay Good In The Refrigerator?

I realize some people will want to extend the shelf life of dried meat via refrigeration. However, keeping it in the fridge will not help as much as you might think. In reality, the key to keeping jerky fresh is to minimize the amount of oxygen in the storage container or bag, not to keep it cool.

How Long Will Jerky Last In The Freezer?

Extreme cold will help increase the shelf life of any food, and jerky is no exception. Jerky will last much longer if stored correctly in the freezer. In fact, the shelf life of jerky can be extended for up to a year when frozen.

To freeze a vacuum-sealed package, simply place it in the freezer as is. Jerky that has been opened will need to be placed in an airtight container or bag to prevent it from becoming freezer burned.

I recommend using vacuum saleable bags, like these found on Amazon. I really like how they are clear and can be resealed with a ziplock. Add in a couple of oxygen absorbers and this method can do a decent job of keeping the jerky fresh, even without vacuum sealing the bags.

If you want to see a really good method for storing foods long term, I did an article on how to store rice and beans long term awhile back. Be sure to check it out.

To consume the jerky that has been frozen, allow it to thaw completely at room temperature before eating.

The quality of jerky will reduce gradually over time. Although jerky is made to last a long time, it is made from a perishable food item and will eventually become rancid and unsafe to eat.

Improper storage, such as allowing it to be subjected to sunlight and not keeping it in a cool dark place or airtight package, will hasten the process of jerky going bad.

How Can You Tell If Jerky Has Gone Bad?

Additionally, signs of moisture on the jerky and in the package indicates that moisture has gotten into the packaging. Since meat lasts without spoiling by being dried, the presence of moisture means that the jerky is going bad. If you’ve discovered that a jerky package has been accidentally stored longer than it should have been, check it first with the signs of spoilage listed above. When in doubt, throw it out.

How To Properly Store Jerky

Meat that has been dried into jerky must be stored in an airtight container or bag. The vacuum-packaged jerky must then be stored in a dry, dark, cool place like your household pantry, kitchen cupboard, or root cellar. As we discussed, to extend its shelf life further, jerky can be refrigerated or even frozen.

A commercially made package of jerky can be stored in the pantry unopened for a long time.

Homemade jerky that has been vacuum packaged will not last nearly as long as jerky purchased from the store. This is because the industrial drying method used will never be as thorough at home.

How Can I Make My Jerky Last Longer?

You can help extend your jerky’s shelf life by taking a couple of steps:

Be sure to date the package of your homemade jerky so that you will have a good idea of how long it should last in storage before going bad.

Does Beef, Deer, Chicken, Or Fish Jerky All Last The Same?

Commercially made and packaged jerky will generally last the same amount of time no matter the type of meat it is made of.

When making jerky at home, attention needs to be made to the kind of meat when drying. Poultry, for instance, will need to be fully cooked or smoked before drying to prevent the presence of salmonella.

Be sure to follow drying procedures for each type of meat to make sure it is adequately dried. Once dried, there is no difference from meat types on how long it will last, once it has been properly packaged. However, homemade jerky will not last as long as commercially made jerky because commercial packaging plants have industrial drying and vacuum packaging technology unavailable at home.

Jerky is an ancient method of preserving meat through a drying and preserving process that allows it to last beyond what it usually would as fresh meat. Knowing how long it will last under every circumstance is an essential part of building an emergency food store. I mean, who doesn’t want to eat jerky? The stuff is amazing. No survival plan is complete without it, IMHO.

I hope this article has helped you in your planning process. Thanks for stopping by!