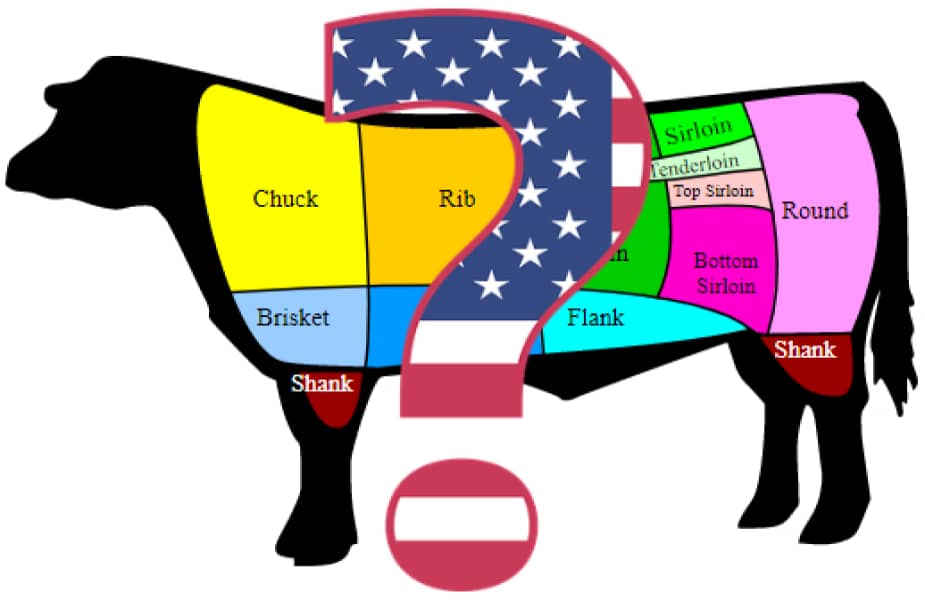 As a quick snack or a concentrated lean protein source, beef jerky is a popular choice for many people. I have often wondered exactly which part or cut of the cow is best to use. So, I looked into the matter, and this is what I learned.

Beef jerky can be made from any part of the cow. However, lean cuts are best and thus used with higher frequency. These include:

To learn why specific parts of the cow are preferred in making beef jerky, read on. This article will cover the process of making jerky and how that is the overriding factor in choosing the cut of beef to be used.

How Is It That Any Cut of Beef Can Be Used for Beef Jerky?

The reason that any cut of beef can be used for making beef jerky rests with the process.

When selecting a cut of beef for making beef jerky, commercial manufacturers, and individuals who make their beef jerky at home generally consider two factors.

A lean cut is required to make beef jerky because fat does not dehydrate as thoroughly as muscle tissue. The presence of fat can cause the final product to contain stringy bits of fatty tissue due to the imbalance in moisture content. More significantly, the moisture retained in the fat — no matter how minimal — can contribute to the beef jerky’s spoilage and rancidity.

The leanest cut of beef for beef jerky is the tenderloin. This is because it comes from the cow’s psoas major muscle — one of the least used muscles by cattle. This runs beneath the ribs of the cow next to its vertebral column toward the butt portion.

Beef jerky made from the tenderloin will be very costly because it is one of the most expensive beef cuts. Additionally, the fact that it is so lean negatively impacts the flavor absorption during the curing process. Tenderloin-based beef jerky tends to be softer in texture and mellower in flavor.

Cool Fact: Tenderloin-based beef jerky is considered more of a gourmet food item. It is rarely used in commercial-grade beef jerky due to cost considerations.

Low-budget homemade beef jerky and lower-end commercial jerky are made from more affordable cuts of beef. These include:

By the way, if you are thinking of making jerky at home, I recommend this dehydrator. It’s well-made and designed in America.

Or, check out my guide to making fish jerky. The principles are the same for using any animal.

Most Popular Cuts of Beef for Making Beef Jerky

The cuts of beef used the most often for commercially manufactured, and homemade beef jerky is, unsurprisingly, those that balance leanness and cost most effectively.

Beef cuts that are extremely tough in texture or too finely-grained and fatty do not make for the best choice to produce beef jerky. This is why the following cuts are rarely used:

Is There Beef Jerky Made With Ground Beef?

Beef jerky can also be made with ground beef. The base and trim cuts for ground beef can come from different parts of the cow. For making beef jerky, the leanest ground beef — sold as “extra-lean” or “ground sirloin” — is the one that is used most often due to it containing less than 10 percent fat.

A four percent fat count would be considered best for making beef jerky.

The majority of the meat used in these blends of ground beef comes from the cow’s rear sections — from its flank up toward the back.

As I have said before, any type of jerky is a great survival food. The great thing is, it’s also delicious. It’s no wonder that that close to 126 million Americans consumed beef jerky in 2019. Any jerky really breaks up the monotony of anyone’s long term food stores. And knowing which part of the animal is best to use is key.

As you have read, beef jerky can be made with any meat portion of the cow. However, the leaner the choice of beef cut, the better suited it will be to make beef jerky. After leanness, the final determining factor in what part of the cow is selected for making beef jerky is usually based on cost.