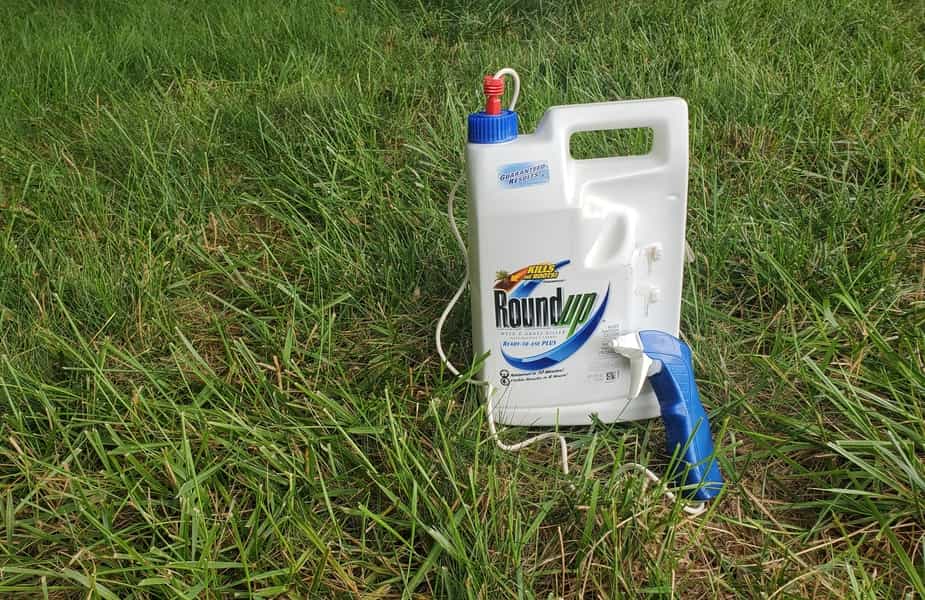 How long Roundup lasts in the soil is something I have wondered about lately. This is because I am in the middle of attempting to rejuvenate my yard after a couple of bad years fighting weeds and crabgrass. I want to know how long I will need to wait before attempting to grow grass again in the bare patches. So, I did some extensive research, and this article was written to document my findings.

Roundup is designed to evaporate within 24 to 78 hours after use. All weed killers, including Roundup, are required to break down in the soil within 14 days.

That’s good news for me. I only need to wait a couple of weeks to be safe. However, there are a few more details about the subject that I need to share. Please read on to learn more.

Does Roundup Poison the Soil?

Roundup does not poison the soil. The active agent is glyphosate in isopropylamine salt, which acts on the leaves, stems, and roots of the plant, and is designed to attack the plant’s growth process. It is a post-emergent and is designed to inhibit the intake of needed minerals and be toxic to the bacterium that fixes nitrogen in the soil.

There is little to no contamination in the soil to adversely affect seeds or plants after spraying because the product is working on the plant directly and not in the soil. If particles of Roundup land on the soil surface when applying onto plants, it will evaporate and break down to its trace elements over several days. This breakdown process will be sped up after rain.

Within two weeks, the soil will be entirely safe for vegetation and for planting desired plants, such as flowers or vegetables, in the area where Roundup was sprayed.

What Will Neutralize Roundup?

Water neutralizes Roundup. A half an inch of water by rain or the garden hose will neutralize it.

Smart practice when using Roundup in an area where you intend to use for planting is to water down the ground before using Roundup on the undesired plants. If the desired plant is accidentally sprayed, it can be saved by washing its leaves before the active agent has Is absorbed into the plant’s circulatory system.

It is important to note that since Roundup is water-soluble, the user should avoid using it within two hours before or after a rain shower. Two hours from the application, the active agent in Roundup will form a water-proof coating on the leaves of the weeds.

Roundup does degrade. According to Cornell University sources, Roundup will degrade completely after use between a period of 1 to 174 days, depending on environmental factors and the soil composition where it was applied. It uses the sap of the plant to travel to the roots and ends up in the soil after the plant dies.

Most weed killers like Roundup have a half-life of approximately 47 days, though it could last as much as 200 days. In either case, it is not active for most of the time that it is in the soil. Since both glyphosate molecules and soil particles are polar charged, they will stick to each other. When this happens, bacteria and fungi can consume the Roundup residue and break it down further.

Roundup can be stored nearly indefinitely if stored in its original concentrate form. While it can be stored for years, the active agent may settle on the bottom in a more concentrated form, with mostly water at the top of the jug. If ir has not been used for a long time, it is a good idea to stir it up before using it.

What Does Roundup Decompose Into?

Roundup will decompose over a period of time into harmless carbon dioxide and nitrogen. It is broken down by evaporation when in the open air and by bacteria in the soil. The residue on dead plant leaves will decompose along with the plant material within a week and a half.

How Long Does Roundup Last After Mixing?

Roundup will generally remain viable for about 4 hours after mixing. It is not a good idea to store it in diluted form, as it will breakdown and lose its potency after a few days. However, if combined with water with high acidity, it will remain stable for a more extended period. It is best only to mix the amount of product that is needed for the desired application.

How Long Does Roundup Stay Active In Water?

Roundup is designed to breakdown in water. After a rain, it will lose most of its potency. How long it will stay active depends on several factors such as environmental conditions of the temperature, depth, sediment ratio, pH factor, and the degree of the presence of macrophytes in the water. Depending on these factors, Roundup will remain active within a few days to a few weeks.

How Long Does Roundup Last in the Bottle?

While being stored in its original container, Roundup will remain usable for up to 8 years from the date of purchase. The bottle should be stored at room temperature and not be exposed to extreme heat or cold. The potency can be determined after use within 24 hours; If the leaves on the plants have not started turning yellow after that time, your supply has probably gone bad.

Long-Terms Effects of Roundup on Soil

The long-term effects of the presence of Roundup in the soil are not entirely understood. Multiple studies have been conducted to determine if Roundup (i.e., the chemical glyphosate) causes cancer. These studies have resulted in conflicting results.

Roundup is produced with a surfactant that causes the active agent molecules to cling to soil particles, slowing or preventing movement through soil and into waterways. According to the US Forest Service, glyphosate loses its herbicidal properties after making contact with the soil and is not absorbed by plant roots.

However, there is growing evidence that with the prolific use of Roundup by farmers, traces of it show up in all levels of our food supply, including packaged food and meat. One study found that glyphosate was found in carrots and lettuce when grown in soil treated with it.

Although Roundup may or may not cause cancer, it may be posing several other health risks by altering our body’s immune system. Some studies have even shown that traces of Roundup can be found in the air and rain.

Another concern regarding the extensive use of weed killers is that it is reducing the quality of the soil it is used on by causing compaction and resulting runoff, the killing of microbes and bacteria, the exhaustion of minerals and nutrients, and the producing “super-weeds” that are resistant to the active agent. More study is needed better to understand the long-term effects of Roundup and other weed killers on the soil.

When using Roundup or other weed killers, safety precautions should be taken to protect the eyes, mouth, and skin. I always use a simple protective mask, like this one as well as gloves.

Other than that, just take your shoes off outside and wash your hands and arms thoroughly right away once you come into the house.

When planning your next battle with the weeds, you will now be much better armed on how to pick and choose the timing of your routine. I am sitting here looking out my window at a few new crab grass patches right now and can’t stand it. I’m gonna go spray them now, wish me luck!