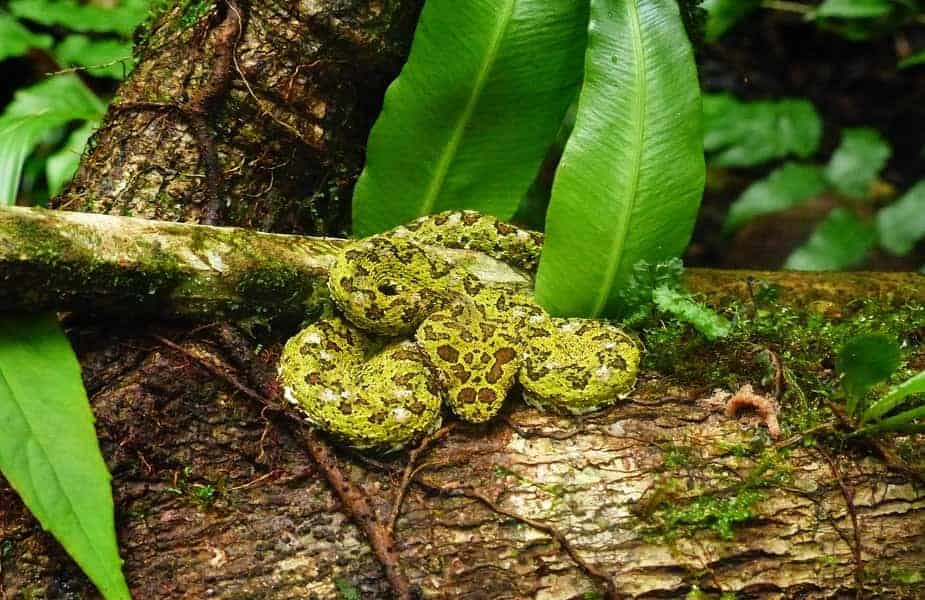 I watch a lot of survival shows on TV, and often the protagonists are most worried about encountering deadly snakes. I have often wondered exactly which snake is the most dangerous, so I did some research. I decided to share my findings in this article.

The most dangerous snake in the Americas is the Fer-de-Lance, known locally as Terciopelo. It is an aggressive species of pit viper found in Central and South America. A bite can have enough potency to kill up to 32 people. Its venom produces a hemotoxin, which destroys the tissue around the bite.

The rest of this article will give you details on the Terciopelo as well as the most dangerous snakes if every region of the Americas. That way, you will know what to look out for in the area you live or are visiting.

The Most Dangerous Snake in the Americas

The most dangerous snake is often difficult to pinpoint because it depends on the definition of ‘dangerous.’ Snakes with the most deadly venom are not necessarily the most aggressive, for example.

To truly obtain the most dangerous snake, the following categories must be factored in:

When all of that is considered, the Fer-de-Lance (Bothrops asper) is the most dangerous snake in the Americas.

The Fer-de-Lance (Bothrops asper), more commonly known as the Terciopelo or Barba Amarilla, is a pit viper with both light and dark brown markings that enable it to blend into its surroundings. It can grow to six feet in length, with a head size of up to four inches wide and fangs that can be almost an inch long.

The venom produced by the Terciopelo is a hemotoxin. Hemotoxins attack the blood and cause clots that can destroy the tissue around it. When threatened, this snake will raise itself up before attacking, so it often bites and injects this venom above the knee. The Fer-de-Lance is dangerous, in part, because it is very aggressive.

The Terciopelo is responsible for nearly half of the snakebites in Costa Rica, which is one of its favorite places to reside. Fortunately, the number of deaths caused by this viper, and most others in the Americas, is only about 9%. It’s the sheer number of attacks that make this snake so deadly. In fact, half of all venomous snake bites are perpetrated by the Fer-de-Lance.

The Clodomiro Picado Research Institute produces snake antiophidic sera, which prevents most bites from becoming fatal. The severity of the bite and the location on the body largely determine survivability.

Moist environments are generally the home of choice for the Terciopelo. They can often be found in Colombia and Ecuador’s forests, the cloud forests of Guatemala and Mexico, and Costa Rica. However, these dangerous snakes don’t limit themselves and have been known to live in drier areas near water.

What Are the Most Dangerous Snakes in North America?

There are quite a few venomous snakes in North America. Here are the 3 most deadly:

What Us State Has the Highest Number of Snake Bites?

North Carolina, where I happen to reside, is reported to have the highest number of reported snake bites, out of all the U.S. states. The majority of the bites have occurred around the Raleigh area, suggesting that the continued population growth is encroaching on snake habitats and people don’t generally know what to do if they encounter a snake.

Scientists also report that there is an increase of bites after heavy rainfall. Other states with high bite numbers include Georgia, Texas, and Florida (where I was raised).

Because of advances in medicine and anti-venom, fatalities from snake bites in the U.S. are quite rare. The Eastern Coral Snake has enough venom to kill five people, and a hefty dose of the venom can kill a human within two hours. Fortunately, it is a reclusive snake that mainly bites for defense, and usually injects only a small amount of venom. I grew up in Florida and always heard stories about the dangers of being on the water and falling into a coral snake nest.

Do Any States Not Have Poisonous Snakes?

Alaska and Rhode Island are the only states in the United States that have no native venomous snakes. Several states only have one species, however: Delaware, Hawaii, Maine, Minnesota, Michigan, Montana, New Hampshire, North Dakota, South Dakota, Vermont, and Washington.

To find out about the venomous snakes found in your state, check out this web page.

What Are the Most Dangerous Snakes in Central America?

What Are the Most Dangerous Snakes in South America?

I was actually surprised to find out that the Copperhead did not make the list of most dangerous snakes. I guess that’s because they are mostly on my radar since I live in the Southeastern United States. At least that is good news for me that they aren’t nearly as deadly as those near the top of the list!

If you have ever encountered a deadly snake, please share your story in the comments. Thanks for stopping by.