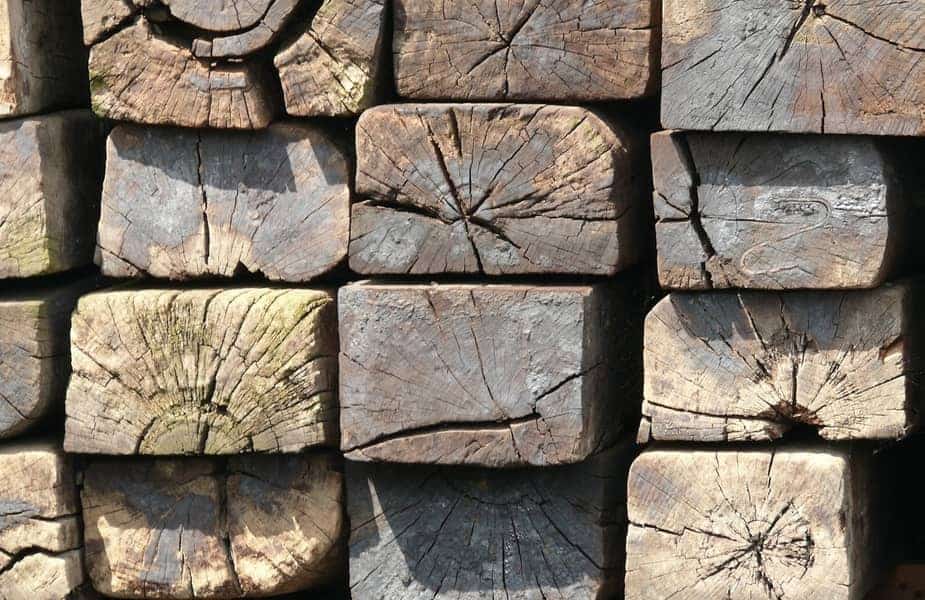 I was recently doing some landscaping and entertained the notion of putting in some railroad ties along the sides of a path. I didn’t want to overload a vehicle, so I needed to know the weight. I did some extensive research, and this is what I learned.

An average wooden railroad tie weighs about 200 pounds but can range from between 100 and 300 lbs. depending on size, wood type, and age. A typical 8’6″ tie made of oak will often weigh about 200 pounds while softer woods will weigh less. Older ties will tend to be more dried out and weigh less.

Let’s go through the different factors in turn:

The standard American railroad tie measures 8 1/2 feet by 9 inches by 7 inches. However, some are eight feet or twelve feet long. So, you will need to fudge upward if the ties you are looking at are longer than the standard 8.5 feet.

While this may not apply to you, there are also concrete ties, or “sleepers,” popular outside of North America. These can vary significantly in shape, width, and height. Some are a uniform height, and some vary along the length of the sleeper. Many are the same length as their American cousins – 2.6 meters, or 8 feet, six inches. Width and height are different based on the type of sleeper used. No surprise here, the smaller the tie/sleeper, the less it weighs.

When used in landscaping, ties are typically sourced from trees cut for plywood and are treated for durability. Before 2004, this treatment often included arsenic, but this is no longer the case. Railroad ties soaked in creosote are generally not legal for landscape use.

While wood remains the overwhelming choice in North America, other materials are beginning to rise in popularity in other areas, mainly due to the increasing difficulty of obtaining hardwoods from sustainable sources. The newer materials offer such benefits as increased durability, the ability to recycle, reduced need for ballast, and resistance to humidity and other environmental factors.

Concrete ties, or sleepers, are now the predominant choice in Europe, and common in Asia and Africa. Concrete sleepers come in several varieties.

Prestressed concrete sleepers have wire strands or threaded bars incorporated to increase strength. Prestressing can be accomplished through pre-tensioning or post-tensioning. Pre-tensioned concrete is made by stretching reinforcement (cables or tendons) across the concrete form before it is poured. Once the concrete has hardened and reached the desired strength, the tension is released on the now-incorporated tendons/cables.

Two-block sleepers, sometimes called “pot sleepers,” are comprised of two concrete slabs joined by a steel tie rod. Rarely seen today, these were commonly found in British rail systems after World War II. Pads are usually fitted to the base of any sleeper to reduce wear., as concrete generally is less elastic than wood, and therefore degrades more quickly. This is especially true in curves and switch areas.

Steel has also been used for railroad ties, albeit with a dubious past. A history of poor performance led to steel being relegated to emergency use. With the increased durability and reliability of steel ties, they have made a comeback. This is mainly for switch areas, low traffic tracks, or in particular situations, such as areas where wood ties are frequently stolen for use in campfires. A prime advantage of steel is that these ties are much more economical than concrete or wood ties when used in new construction.

Plastics and composites are increasingly making their way into the market because of the ease of recycling them for future use. Composites can be particularly beneficial in bridge areas, where they can assist in the distribution of force. The ability to incorporate plastics and composites into hybrid ties also makes them of interest. Many of these compounds weigh less than other materials but offer the same or even greater durability.

This is primarily a concern with ties made of wood. Generally, the older the tie, the less it will weigh. This is because more aged wood tends to dry out, thereby weighing less.

Pressurized landscape timbers can last for years. However, if not treated, wood can fall prey to insects, weather damage, or wood rot, all of which can decrease weight.

Ultimately, the majority of railroad ties that you will buy from Lowe’s or Home depot will be about 200 pounds. However, you will sometimes see them at 175ish and sometimes as much as 225. If you just assume they are each 200, you will probably be fine.