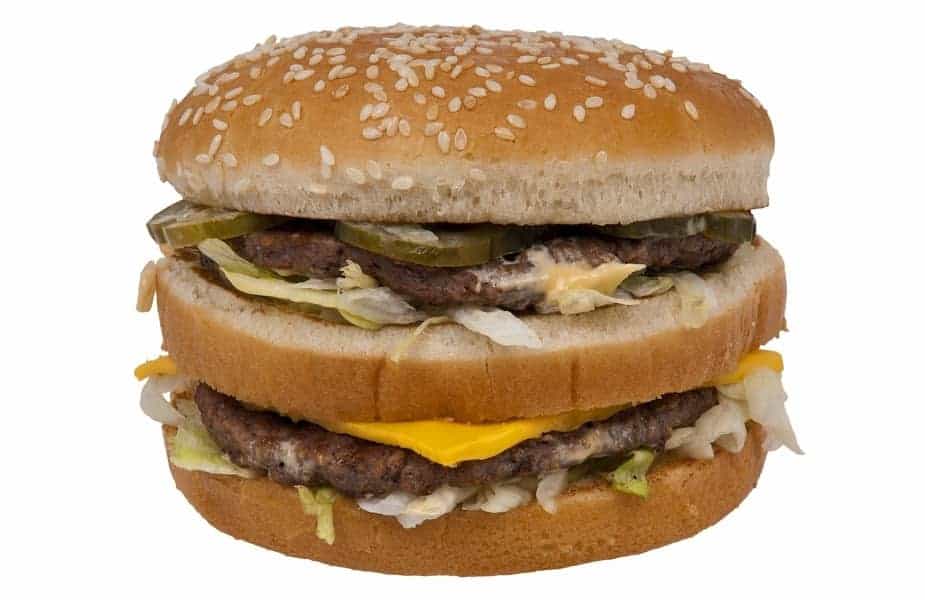 Ever wondered whether it’d be cheaper to make the delicious McDonald’s Big Mac at home than buying from one of their outlets?

Excluding labor, one Big Mac costs McDonald’s about $0.77 to make in the US. The same burger would cost about $6 to make at home if you sum up the individual costs of the ingredients. Keep in mind that this figure may vary by geographical location due to the different prices of goods and services around the world.

In the rest of this article, we’ll explore the most relevant determinants of the cost of making a Big Mac to help you find out whether it would be cheaper to make one on your own.

Let us get right into it.

What Exactly Determines the Cost of Making the Big Mac?

To estimate how much it costs McDonald’s to make one Big Mac, you need to understand the costs associated with the cooking process and the cost of the individual ingredients.

So without further ado, let’s take a quick look at both.

The Ingredients in a Big Mac

Now let’s take a look at each ingredient in greater detail.

McDonald’s uses two 1.6 oz (45.4g) beef patties in one Big Mac hamburger. If you don’t know what a patty

is, it’s a flattened round piece of minced meat

Including beef ensures that you get an adequate serving of essential body nutrients such as iron, which boosts your body immunity and prevents anemia and zinc, which improves your metabolic functions. And since the beef in the Mac is lean, you get these all-important nutrients while keeping your consumption of saturated fats

There are many “special sauces” out there, but the one in the Mac lives up to its name. It adds a special sweet-and-sour taste to the burger that your everyday ketchup simply can’t provide.

Such is the sauce’s remarkable taste that, for many years, it’s been touted as McDonald’s secret weapon in the food industry. However, the food giant quickly thwarted those claims, pointing out that the specia

So, what does this special sauce contain?

According to McDonald’s, it consists of the following ingredients:

Up until 2018, it contained artificial ingredients such as potassium sorbate and sodium benzoate, but the food giant removed them to make the sauce safer and healthier.

McDonald’s uses 28g (about an ounce) of shredded lettuce in the preparation of the Big Mac. Being a vegetable, lettuce compliments the taste of the burger and adds vitamins K and A. The former vitamin helps in blood clotting and ensures healthy bones, while the latter has a myriad of health benefits

It’s rich in fiber, which helps in the digestion process and folic acid, a crucial element in the formation of red blood cells (without which you can suffer from anemia). It also contains Vitamin B to help your body create healthy new cells and low cholesterol content to minimize the saturated fat content in each serving.

Onions also have some sodium, which helps control your blood pressure and develop a healthy and functional nervous system. Meanwhile, the outer layers are packed with flavonoids, whose health benefits

include functioning as a natural antioxidant, anti-inflammatory, and antiviral substances.

McDonald’s uses processed cheese in its Big Mac and only one slice is enough. Cheese comes with many health benefits

, but the most apparent ones include supplementing your diet with calcium, protein, and Vitamin A.

Calcium promotes strong bone development, while proteins help in muscle development. Vitamin A, on the other hand, is essential in strengthening your eyesight.

Besides the crunchiness and flavor that we’ve all grown to love over the years, sesame seeds are rich in copper, which helps in making red blood cells and keeping your immune system healthy

By including one bun of sesame seeds in the Big Mac, McDonald’s appeals to both the young and seniors. That’s because sesame seeds also come with calcium, whose intake helps prevent osteoporosis

and encourages the development of strong bones.

The Big Mac comes with at least three dill pickle slices. Made from carefully selected cucumbers, McDonald’s pickles are delightfully sour and crunchy and are largely responsible for the crunchy feel and sour taste of the burger. During preparation, they’re soaked in water to remove excess water and increase crunchiness, as well as the concentration of calcium and potassium.

Calcium helps build strong bones and teeth in adults, while potassium improves the functioning of the nervous system, muscles, and other crucial body functions like heartbeats.

How the Big Mac Is Made

Now that you know what the Big Mac is made of, let’s dive right into the process of making one and find out the exact amount of each ingredient used so we can estimate the total cost of making this famous burger.

In a nutshell, you need the ingredients discussed earlier in the following quantities:

The Total Cost of Making a Big Mac

Having looked at the process and the ingredients that go into making the Big Mac, let’s estimate the total cost of making the burger at home by summing up the market prices of the individual components.

From the above table, the approximate cost would be $6.6 if you were to make a Mac on your own. That said, it’s worth mentioning that this figure may differ based on geographical location and time because the prices of the ingredients vary based on these factors.

Is It Cheaper to Make a Big Mac at Home?

The average selling price of the Big Mac at McDonald’s is about $5.51. That means that it’s cheaper to buy a Big Mac at a McDonald’s outlet than making one from scratch. This is particularly true if you take into account the fact that the $6.631 figure doesn’t include other indirect costs such as labor, electricity, time, and other unforeseen costs.

If you were wondering whether you’d save a few bucks by making the Big Mac at home, the answer, unfortunately, is no. The overall costs of making a Big Mac appear to be higher than the actual price at McDonald’s outlets across the globe.

However, the food giant utilizes economies of scale by producing and selling Big Macs in larger quantities. This way, they can afford to sell the world’s famous burger at a relatively lower price without incurring losses.

Whether it’s from your pets, your kids, or just general wear and tear, a scratch in your wooden door can be an unsightly thing. Luckily, there are ways to fix these scratches. Of course, it will...

If you try to look for a substitute for lard online, it will probably tell you to use butter. While it's true that butter is perhaps the "best" alternative, it is actually less healthy than just...