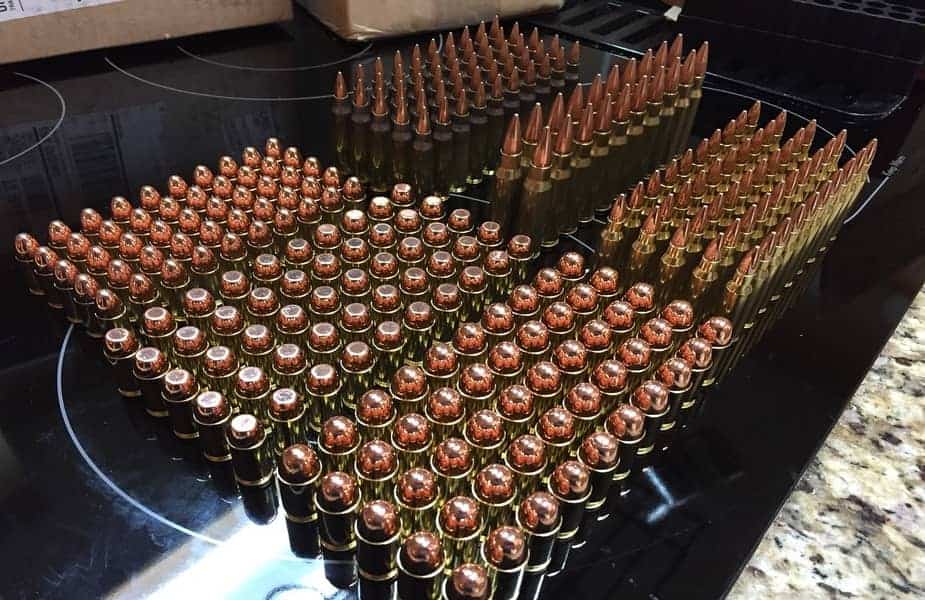 Whether you own a firearm for hunting, sport, or home defense, one of the cost considerations is the ammunition price for the weapon. Ammo cost affects your budget for recreational shooting as well as for proficiency training at a shooting range.

The cost of ammo is determined by the caliber, type, and manufacturer of the ammunition — as well as supply-and-demand market forces. Prices for ammunition can range from $0.05 for a .22LR round to $10.50 for a .50-caliber round. Ammo costs can be reduced when reloading your ammunition casings.

Read on and discover how to determine baseline prices for some of the most popular ammunition sizes. Also, how reloading can lower per round costs.

How Much Does a Bullet Cost?

An individual round of ammunition consists of a casing, powder, primer, and a bullet. When you buy ready-made ammo, you are technically buying a cartridge, not an individual bullet. The bullet is only the projectile that is fired at the end of the cartridge in the barrel of the weapon when the primer is engaged.

By understanding how so many combinations are possible, you can better make sense of the ammo price variances.

“Anatomy” of a Bullet and How It Affects Cost

Since ammunition prices can vary widely, it is best to first understand a few rules of thumb when it comes to the main components of an ammo cartridge and how they affect the cost.

If you are looking to reload your cartridges after shooting, brass-cased rounds will offer you the best value from a reloading perspective.

Bullets — the actual projectiles at the tip of the cartridge that fly out of the gun muzzle when fired — will usually be made of lead or non-lead materials. The latter is normally composed of all copper or copper alloys.

Generally, lead bullets will be less expensive than non-lead bullets. The price differential can be as much as 50% to 100%.

Not only does the material that the bullet is made of affect cost, but so too does the actual type.

These bullets tend to be the most affordable for any caliber. They are lead bullets covered in a copper jacket. Ideal for target practice and plinking due to their low cost, they are not recommended for hunting large game or self-defense. Full metal jacket bullets lack the stopping power of other types of bullets because they do not expand when they enter a target.

These bullets have a hollow point at the tip. This allows them to expand when they enter their target. This provides for greater stopping power than a full metal jacket round.

Some jurisdictions require expansive bullets when hunting large game to ensure a humane kill. They are also preferred for self-defense.

In terms of cost, they can be 50% to 75% more expensive than full metal jacket rounds.

Practical Pricing Examples of the Most Popular Ammo

Here are some price ranges for the top four rounds of ammo sold in the United States. These price ranges were gathered from ammo price aggregators in July of 2020:

To check the current prices of the various calibers, here is the link to my recommended online ammo supply store.

How Much Does a .50-Caliber Bullet Cost?

.50 caliber rifles are sold for civilian use. They provide exceptional range and are used for big game hunting. In the military, they are used as sniper rifles and for deep penetration of hard targets.

Using the same pricing range methodology used above for the more popular calibers, its price range per round is $2.50 to $10.50.

How Much Does a 30mm Round Cost?

There is no civilian variant of a 30mm round for sale. In the case of the U.S. military, it is used primarily as an armor-piercing round for machine cannons. It is used in attack helicopters, such as the Apache AH-64. It is estimated that each 30mm round costs $100.

Can You Save Money Reloading Your Casings?

There is a cost savings of 68% to 88% when you reload your brass casings. However, to do so, it requires investment in the equipment required to make this possible. Additionally, you must factor in the time to reload your casings and the learning curve involved.

Some gun enthusiasts do it to have improved accuracy by minutely controlling the pressing of their customized cartridges. The work involved, however, is often described as “painstaking.”

There are kits sold that include all of the equipment you need to reload your casings. They range in the $300 to $600 range. These include a press and tumbler. The Rock Chucker Supreme Master Kit is an example of such a kit that includes everything you need to press your ammunition.

For the most part, unless you are shooting an extremely large number of rounds or you want to dive deeper into gunsmithing as a hobby, the time in mastering the reloading of your casings may outweigh the savings.

As you have read, multiple factors that come into play with the cost of ammo. Even within a single caliber, the per-round costs can vary. By knowing the basics about the different casings and bullet projectiles that comprise a single cartridge, you are better prepared to gauge which ammo round represents the best value for your shooting style.

If you decide to buy your ammo online, I highly recommend shopping at guns.com. They focus on selling locally as much as possible rather than from warehouses from across the glove. Check out their reviews and decide for yourself.

Continue Reading
link to Can You Make A Roux With Cornstarch? | With 5 Alternatives