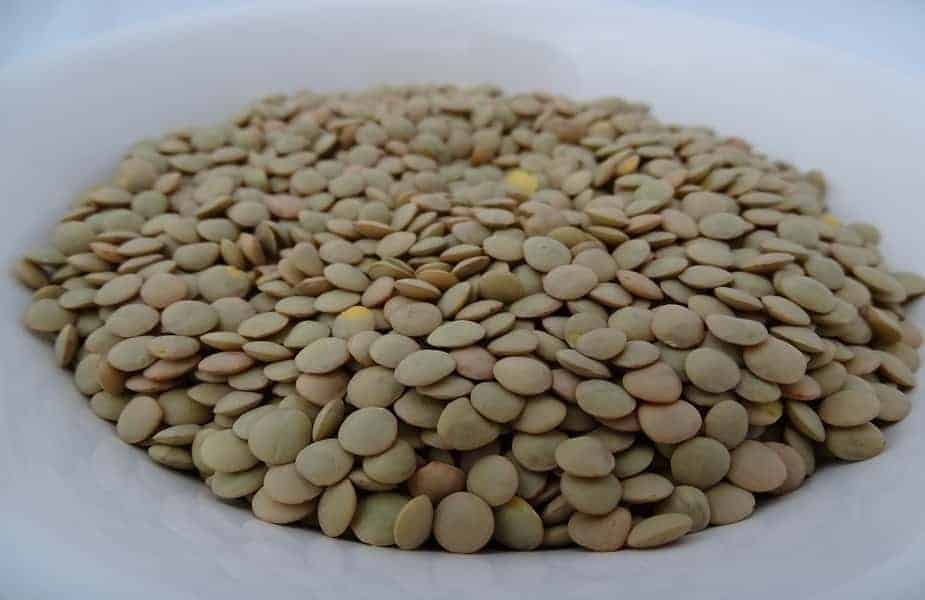 Lentils have been around for many, many years and are very nutritious. But, until a few years back, I knew nothing about them since we only ate other kinds of legumes on a regular basis, especially lima beans and black-eyed peas. I was curious about whether they would be safe to eat raw, in a smoothie for example. So I did some research and this is what I found out.

Lentils and other legumes are dangerous when eaten raw because all beans, including lentils, contain lectins which can be harmful to humans. They can be made safe to eat by either cooking them thoroughly or sprouting them.

In this article, we will discuss why they cannot be eaten raw, how they can be sprouted, their nutritional value, and the various ways they can be used in cooking.

Why Can’t Lentils be Eaten Raw?

So in my efforts to add more variety to my family’s diet, I discovered that lentils, though rather bland on their own, are delicious when added to soups, stews, and casseroles. However, in researching their nutritional value, I discovered that they cannot be eaten in every form.

While lentils are very nutritious with many health benefits, eating them raw or undercooked is very dangerous, and can even lead to death. This information is startling, to say the least, but what is unbelievable to me is that there are no warning labels providing us with this information!

Beans, including lentils, contain a glycoprotein called lectins. While some lectins are not harmful to humans, those found in raw or undercooked beans are. And though many vegetables are more nutritious raw, beans become more nutritious when cooked and must be boiled to destroy the lectins which makes them safe to eat.

It is believed that beans contain lectins to prevent animals from eating them and that animals can detect lectins by smell. However, humans cannot detect that odor and the beans just do not give us any indication that they are toxic.

Kidney beans are the most dangerous of all legumes, containing the highest amount of the toxin phytohemagglutinin. These toxins can cause severe diarrhea and vomiting.

How Can We Make Lentils Safe to Eat?

First off, be sure to carefully read the labels on the lentil package before eating or preparing. The advice I give is based on research and not as a medical professional.

As per my research, lentils and all other legumes can be made safe by two different methods: cooking and sprouting.

How Can Lentils be Cooked?

Lentils and all other legumes should be cooked by package directions which include:

Cooking lentils and other dry beans take quite some time to cook. Depending on a number of factors such as the size of the bean, how long they were soaked, and how long they were stored before use, you can expect the cooking process to take somewhere between 30 minutes and 3 hours.

Most lentils cook in approximately 30 – 45 minutes depending on the variety, while other beans such as kidney and black beans take 2 to 3 hours. Some lentils retain their shape after cooking like the brown and green varieties, but the red, yellow, and orange varieties which have the husks removed will fall apart and become indistinguishable.

A couple of tips on cooking legumes:

Follow these tips, and you can safely eat all the beans you want, taking advantage of all their health benefits without any danger.

How Can Lentils be Sprouted?

Soak lentils for 12 hours or overnight as for cooking, rinse well, drain in a strainer or colander, sort and remove any debris, and keep in a dark area. Be sure to remove all moisture. Rinse in tap water every 12 hours for a total of 3 days, draining well to remove all water after each rinse to avoid mold. At the end of the 3rd day, they should be sprouted. Rinse sprouted lentils well before using them. These sprouts can be kept in the refrigerator for approximately 1 week.

How Long do Lentils Last?

Lentils are only available dried and canned, not fresh. Dried lentils should be clean, dry, firm, and not shriveled. They can be stored indefinitely if stored properly. They can certainly be stored for at least a year with no obvious changes in their appearance.

If, however, they are kept for an extended period of time, the color may fade slightly, but their flavor will in no way be changed. Cooked lentils can be kept in the refrigerator for at least a week in a closed container and stored in the freezer for up to 6 months.

What is the Best Way to Store Lentils?

The best way to store lentils is in an airtight container such as a Mason or canning jar with the lid firmly affixed. The storage area should be cool, dry, and free from sunlight or any bright light. Canned lentils should be stored under the same conditions.

Should the lentils come into contact with moisture or insects, discard them immediately.

What Exactly Are Lentils and Are They Good For Us?

Lentils are members of the legume family closely related to beans and peanuts. Like the other legumes, they grow in pods but are much smaller than the rest. They are, however, one of the most nutritious foods containing high amounts of dietary fiber which lowers cholesterol, seven important minerals, B vitamins, and lots of protein, all while containing no fat and only 230 calories per cup.

Studies have shown that a diet rich in high-fiber foods like lentils helps prevent heart disease. Lentils are beneficial to the digestive system, have a stabilizing effect on blood sugar, and provide tons of energy by replenishing the iron in our bodies.

Where do Lentils Come From?

They are believed to have originated in the Near East but are now cultivated mainly in northern Africa, Canada, Australia, and in many parts of Europe and Asia. And what I found very interesting is that lentils have been discovered in archaeological sites in the Middle East dating back 8000 years.

What Are the Different Types of Lentils?

Even though here in the United States we are most familiar with the green or brown varieties, lentils are also available in black, yellow, red and orange colors.

What is the Nutritional Value of Lentils?

Lentils are well known for their high fiber and protein content. According to the U.S. Department of Agriculture, boiled lentils are estimated to have approximately 16 grams of fiber and 18 grams of protein per each one-cup serving. One cup of cooked lentils has 230 calories and an estimated 7 milligrams of iron and 731 milligrams of potassium. This is one instance of the cooked vegetable being more nutritious than the uncooked.

How Can Lentils be Used in Cooking?

Here are some easy and tasty ways to use lentils in cooking:

Serving lentils to your family is a much cheaper way of providing higher levels of protein to your family than meat, and they provide nutritional value and many health benefits.

They can be served plain, though rather bland, but are delicious added to soups and stews and make fantastic and delicious casseroles. The important thing to remember is that lentils cannot be eaten raw and must either be cooked thoroughly or sprouted to be safely consumed.

Before you eat any type of lentils be sure to check with a qualified professional or medical advisor. My advice is if you aren’t sure, don’t eat it. If you feel like you may have poisoned yourself, please contact poison control or dial 911 immediately.

Other Uses For Lentils

Lentil flour is available in some specialty markets and is used in India to make a type of fermented bread.

Catholics in many countries have for many years been using lentils as a staple food during Lent.