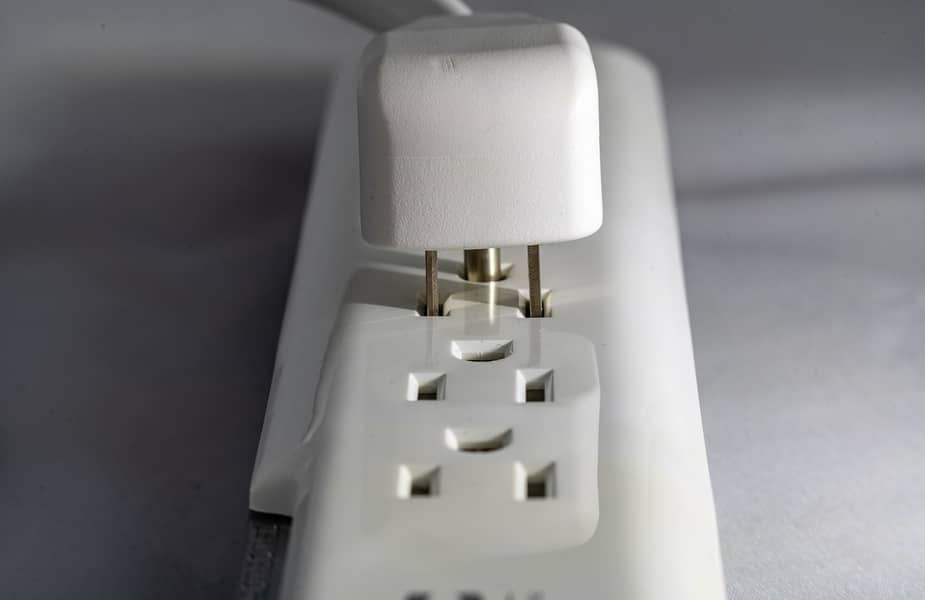 I remember several years ago when I had a wall air conditioner unit that would not reach the power outlet. I wondered if I could use a power strip with an extension cord. So, I did some research, and this is what I found out.

It is not safe to plug an AC unit to a conventional power strip as it can cause electrical fires to break out. Instead, you can use surge protectors. These devices look and function just like a power strip but with added protection against power surges, which can damage your unit.

Now that you know to avoid power strips, let’s talk about extension cords and surge protectors, whether you need them, and what type to get.

Can You Plug an AC Into an Extension Cord?

Extension cords are usually made from cables that are not suited for heavy-duty usage. These appliances draw large amounts of electrical current once you turn them on, which most extension cords cannot handle since their cables are not strong enough to deal with that level of current flow. In fact, if you plug large appliances such as ACs, refrigerators, or heaters into a conventional extension cord, you are just asking for trouble and creating a hazardous situation where a fire can break out.

Depending on how big the current requirement of your large appliance is, once you plug it in your extension cord, you likely won’t even need to wait too long before you start to smell the scent of burning rubber. This signifies that your extension cord is already melting due to the high heat that the current flow induces.

Important Tip: If overheating and melting happens, do not attempt to pull out the plug of your AC from your extension cord. At that point, it is already too hot that you might get burned or electrocuted. What you have to do instead is to find your circuit breaker and trip it to temporarily cut off your power supply and stop your extension cord from heating even further.

If you really want to use an extension cord, make sure that it is industrial-grade, and its cable is thick enough so that it will not heat up too much or experience no heating at all once you connect your AC to it. However, it’s always better to just directly plug your AC to its dedicated wall outlet instead of using extension cords or power strips to ensure safety.

Do I Need a Surge Protector for My AC?

A surge protector is a specially made device to protect your electrical appliances and other devices from power surges. It looks like a typical power strip wherein you can plug multiple devices and appliances to it from just one socket of your wall outlet. Still, surge protectors have something called a Joule rating, which you can use to differentiate them between power strips.

During storms or lightning strikes, a power surge happens wherein dangerously high voltages and currents are produced. Usually, your electrical utility deals with this, but they cannot mitigate all of them. Sometimes, the stray currents or voltages that your utility’s protection system missed might find their way towards your electrical system, causing serious damage to your appliances.

Can a Power Surge Damage Your Air Conditioner?

Although dangerous power surges can be considered as a rare occurrence, prevention is always better than cure. Adding another layer of protection for your AC unit can ensure that you won’t have to shell out for repairs or, possibly, buy a new one due to irreparable damages caused by power surges. Just make sure you get one rated to work with an AC unit.

Every device that uses electricity to function is at risk during power surges. Modern AC units, especially those considered to be highly efficient, are more susceptible to this since they contain electrical components that are very sensitive to power fluctuations. Depending on the degree of the power surge, the damages can range from minimal, which can still be repaired, to catastrophic, wherein you will have to buy a new one due to the irreparable damages that your unit has suffered.

To prevent such damages to your AC unit and your other electrical appliances and devices, it is crucial to employ an effective protective measure that is so dependable. That way, you can rest easy through the whole ordeal whenever storms or other events might cause power surges.

One such method is to use a surge protector. Still, practicality-wise, you can just simply unplug your AC and other electrical appliances during storms to altogether remove the threat of power surges.

How Much Does an AC Surge Protector Cost?

Plugging an appliance or AC unit into the wrong type of power connection can be a costly and dangerous decision. Please take my advice and avoid using power strips or extension cords that are not rated for the draw needed in air conditioners or other electrical devices in your house.