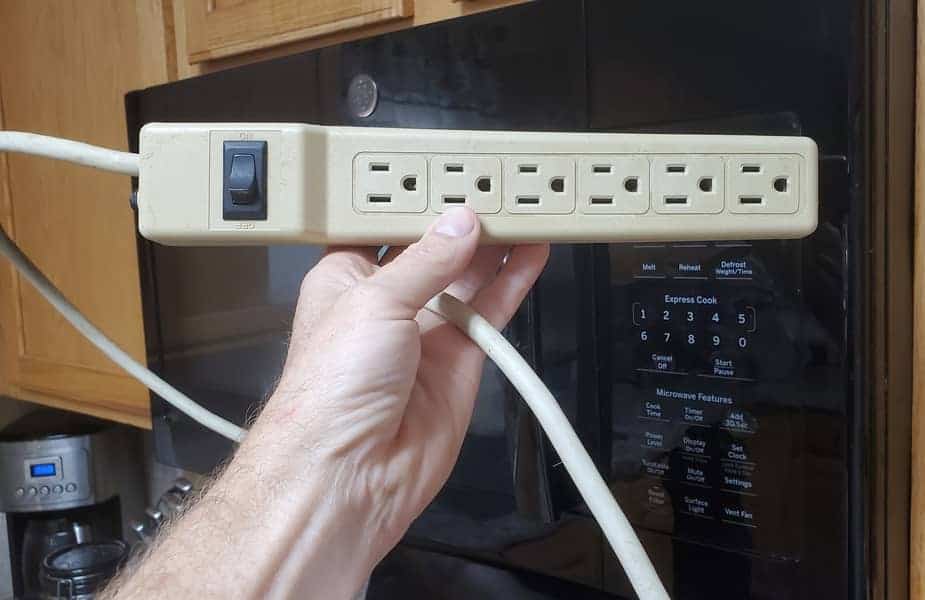 With the growing number of kitchen appliances in our homes, it can be challenging to find a place to plug in everything you need. It can be tempting to grab a power strip to plug these items in. But can a microwave be plugged into one?

Microwaves should not be plugged into a power strip because it is a safety hazard, can cause a fire, and even damage your electrical system. Most power strips are not rated to handle the 12 to 15 amps that a microwave typically draws.

Please read on to learn more about safely plugging in a microwave, whether you need a surge protector and other concerns.

Why You Cannot Plug a Microwave Into a Power Strip

No matter the size of your microwave, you should never attach it to a power strip. In fact, most universities even list it in their safety manual as a big no-no for dorms. This is a common issue and nothing to play around with.

When fire inspections are conducted of both private and public living spaces, one of the most common hazards found is with multi-outlet power strips. This is because most of the ones people buy are made cheaply and have fragile internal parts that are easily damaged through careless use.

Having them kicked or stepped on frequently is the leading cause of issues. Once damage has occurred internally, the strip can get too hot and potentially cause a fire. The primary way to prevent this is not to have them on the floor and instead mount them in an elevated position. On the wall or inside a piece of furniture is the best solution.

How Your Electrical System Can Be Compromised

Burdening one outlet by plugging multiple appliances into it via a power strip can overload the circuit. A good rule of thumb is that if the power strip feels very warm or hot, it is probably overloaded.

The fact is that some houses have trouble handling higher wattage microwaves when plugging directly into the outlet. Adding in another layer via a power strip only amplifies the issue. Furthermore, the fact that kitchens are the power centers of the home and where many high-powered appliances usually reside, and you are setting yourself up for an overload nightmare.

Therefore, it is vital that your home has enough dedicated circuits to deal with all the appliances you use in the kitchen. About 7-8 separate circuits in the kitchen are enough for most homes to function comfortably.

Just keep in mind that older homes usually have a lot fewer circuits available for them to use. And, sometimes, you will come across a microwave plugged into a standard wall outlet that can only safely run lower-powered microwaves. Larger microwaves (1500 watts or higher) really need to operate on their own dedicated circuit.

If in doubt, call a qualified electrician for an assessment.

Can You Plug a Microwave Into an Extension Cord?

Have you ever noticed a light flickering in your home? This is often the result of plugging an overpowered appliance into an extension cord instead of a grounded specific electrical outlet.

Breakers being tripped and fuses blowing are all signs that an extension cord is being misused. All of which is likely to occur if you use one to plug in your microwave.

Do I Need a Surge Protector for My Microwave?

Of course, there is a caveat to this advice. MOV’s are not designed to protect against extended electrical surges. Their properties can become diminished over time.

If you experience a high frequency of thunderstorms where you reside, you may want to consider purchasing a surge protector for your microwave. There is one on Amazon specifically designed to be used with microwaves. Just click that link to see the listing and current price.

Can a Power Surge Damage a Microwave?

Despite the MOV, the outlet attached to your microwave could be the victim of a lightning surge strong enough to damage your microwave. This is because MOVs are only designed to stabilize short term electrical spikes and not extended surges. Long terms surges that are possible during lightning storms can leave your microwaves vulnerable to damage.

Usually, when a microwave does not work after a power surge, a fuse has been blown and not due to damage. So make sure you check the electrical box and eliminate that as a possibility first.

A microwave surge protector needs to have an internal fuse installed. The internal fuse would be used to break the connection to the circuit in a situation where the voltage surge overcame the suppressor. This would save your microwave from being damaged.

How Much Does a Microwave Surge Protector Cost?

Surge protectors capable of protecting your microwave range in price from $20-150.

Sometimes buying a new microwave can be a more economical choice than purchasing an expensive surge protector.

Never Plug These Items Into a Power Strip

Thousands of house fires occur each year because high-powered appliances were plugged into unequipped power strips.

What if I Don’t Have Enough Outlets?

When people do not have enough outlets, they look for alternatives to solve their electrical problems. They will sometimes feel like they are forced to have a few kitchen appliances share an outlet via a power strip. This is never a good idea.

If you don’t have enough outlets, call an electrician for an assessment. It’s a lot cheaper than you think to add a new outlet. While he is there, have him check to see if your electrical system might need an upgrade. This is especially relevant if you own an older home.

Like most power-hungry kitchen appliances, microwaves should never be plugged into a power strip. Many people have died over the years due to these fires, and even more people have been injured.

I’m glad you were smart and did some research before making a potentially deadly mistake. Good on you!

Continue Reading
link to Can You Make A Roux With Cornstarch? | With 5 Alternatives