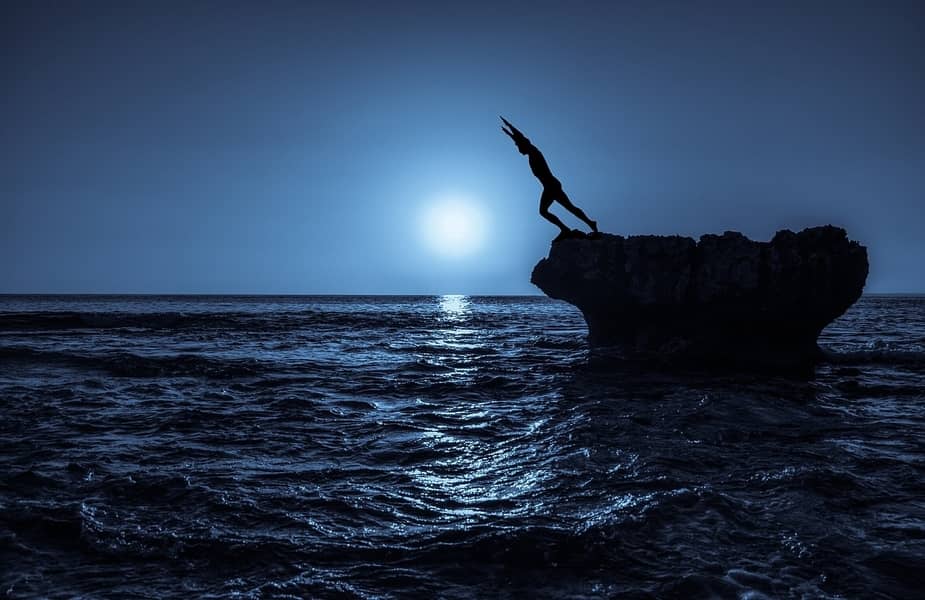 It isn’t safe to swim in the ocean at night. Swimming in the ocean at night can pose a greater risk than swimming during daylight hours, especially for inexperienced swimmers. This is due to the loss of vision in the darkness, the lack of people nearby, and the nocturnal behavior of ocean predators.

What Are the Biggest Dangers When Swimming at Night?

Swimming in the ocean at night shares the same dangers as those experienced during the day. According to the National Oceanic and Atmospheric Administration’s National Ocean Service (NOS), these risks include:

The only risk present in swimming during the day that is not present at night is getting sunburned.

Is Swimming in the Ocean at Night Just As Safe as During the Day?

While the same risk factors are present at night as they are during the day, swimming at night does augment the danger involved with some of these factors.

There are two main reasons for this:

Swimming in the ocean at night means doing so under darkness. This keeps track of where you are relative to the shore much more difficult than during the day.

Darkness can also make spotting rip currents and shore breaks more difficult. If caught in a rip current, the inability to identify the shore could prevent you from successfully getting out of it.

Simple disorientation caused by the darkness — especially on a moonless night — can cause swimmers to swim deeper into the sea, to the point where they lack the physical prowess to swim back. Choosing an area that has a well-lit shoreline can help you keep your bearings.

Lack of sunlight also makes spotting the bottom more difficult. Some marine creatures increase their activity at night. Wearing swimming shoes, like these found on Amazon, will make stepping on the bottom safer as you tread back toward shore. Otherwise, you risk stepping on a sea urchin or jagged rock, which can be a painful experience.

In the dark, it is also easier to inadvertently swim into murkier water that may be contaminated by microbial or chemical pollutants.

At night, however, very few people, if any, will be on the beach. Lifeguard stations will also be unmanned.

This lack of other people during the night means that swimmers who find themselves in distress may not be spotted. When swimming in the ocean at night, it is highly recommended that you never do so alone. It is advisable to have friends onshore who are aware of your activity.

What About Increased Activity of Ocean Predators at Night?

Some ocean predators are more active at night. For example, stingrays tend to scavenge more at night. Bumping into one in the dark could result in a swimmer getting stung. This can be painful and, in some cases, lethal.

Are Sharks More Dangerous at Night?

Sharks tend to be more active during the night and twilight hours. Some species come closer to shore during these hours in search of prey.

As a swimmer, being in the ocean during those same hours increases the possibility of a shark confusing you for prey.

If you intend on swimming at night, it is recommended that you inform yourself as to the presence of sharks in that area based on recent local reports, If there are reports of shark sightings in the vicinity during the day, the probability of sharks hunting for food in the same area at night is going to be greater as well.

Common Sense Rules for Swimming in the Ocean at Night

How Far Out Is It Safe to Swim in the Ocean?

Whether it’s day or night, two things should govern how far out you should swim in the ocean:

As explained earlier, at night, decreased visibility means that you should remain closer to shore to avoid losing sight of it.

When Not to Swim in the Ocean?

Again, these restriction guidelines apply whether you swim day or night. However, they have added resonance when applied to night swimming.

Don’t swim in the ocean at night when:

Final Words on Swimming in the Ocean at Night

The dangers associated with the risks of swimming in the ocean at night are demonstrably higher when compared to those same risks during the day. The margin for error is far less at night.

For that reason, anyone contemplating swimming at night should take extreme caution and be aware of how decreased visibility due to darkness, a smaller number of people inland, and the potential for more aggressive shark behavior can put them at added risk.