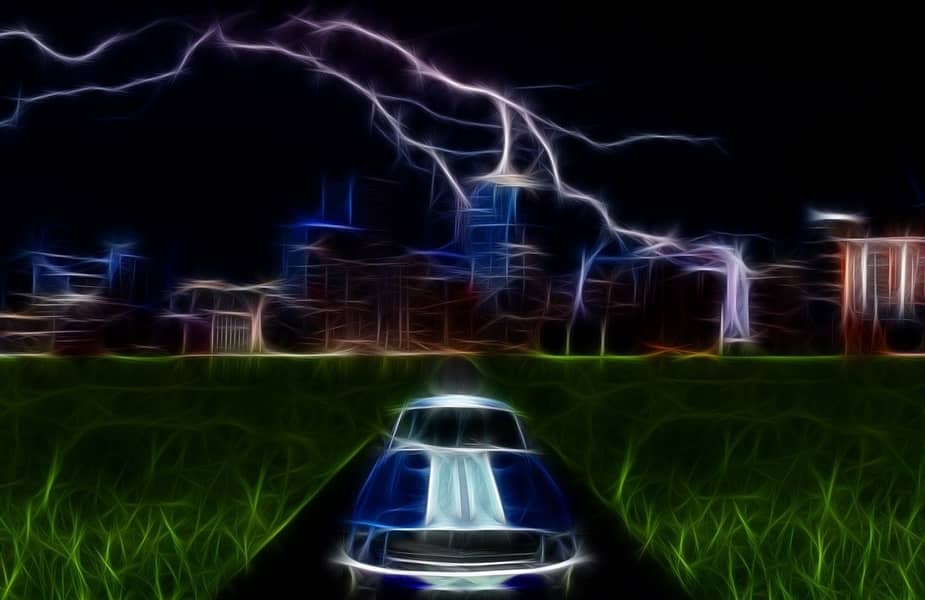 Is a thunder or lightning storm approaching and you are not sure what to do? Quite a few myths surround the level of safety in your vehicle during a thunderstorm. But what’s real?

During a thunder or lightning storm, it is safe inside a car only if you don’t touch any metal part. Even so, the safest place to be during a storm is indoors, away from walls, cables, and pipes. However, a car can provide a safe shelter from lightning thanks to its functionality as a Faraday Cage.

Interestingly, the protection that the car is offering you does not come from its rubber tires. Let’s have a look at everything you should know to see through an approaching storm safely.

Is It Safe If You Hear Thunder but See No Lightning?

If you are not enjoying the storm from the comfort of your living room, it is reasonable to feel threatened, and a little scared as you see lighting. But what does happen if you hear thunder while you are driving?

A thunderstorm can be scary, as you probably won’t be able to see the lightning, just hear them. These strikes can be of two types:

A thunder is nothing more than a sound wave produced by striking lightning. These sound waves travel (through the air) at the speed of 340 meters per second (1,200 ft per second). Even if you are not able to see flashes of lightning as you drive, but you can hear thunders, you should consider taking preventive measures. Indeed, if you can hear a roar from 10 miles away from a storm and lightning can travel through that distance if attracted.

In such a situation, it is recommendable to park, switch your car off, and wait for the storm to pass.

What Happens If a Car Gets Struck by Lightning?

Many drivers believe that the rubber tires of a vehicle will save them from being electrocuted by a strike. While this is only a myth, your car can indeed represent a safe shelter during lightning or thunderstorm.

In 1979, British scientist Michael Faraday found out that a metal container can protect the object inside it from electrical discharge applied on its surface. This mechanism carries the name of “Faraday Cage” and works by dissipating the charge that hits its surface in the ground, following the conductive walls.

Thanks to the metal structure of the car, vehicles can be excellent Faraday Cages when there is a need for it. If your car gets struck by lightning, the charge will run across the ceiling and through the sides. Then, it will keep traveling into the ground through the wheels, protecting anything or anyone inside.

However, for this mechanism to work, you should ensure that:

Said this, a car that has a soft or fabric top will not be adequate shelter from either rain or lightning. Moreover, if you have the option to find protection indoors instead of staying in your car, you should opt to do so.

Ultimately, especially if you are driving a modern vehicle, the sudden current discharge will interfere with the functioning of cables and mechanisms that make your car running. This effect is because the components in any vehicle are not capable of bearing such a voltage. Other temporary and permanent damages, such as exploded damages and ruined exteriors, are also possible.

Can You Get Electrocuted in a Car?

If you don’t have the option to see the storm through from the comfort of your house, a car is the safest place to be. However, anything is possible, and mistakes can happen.

Indeed, if you touch the exterior of your car, turn the engine on, or get in contact with a metal surface, you might end up electrocuted. As we have seen, your vehicle is an excellent Faraday Cage made of conductive metal. However, by touching any of the surfaces, you would be interrupting the natural course of the electric charge.

Our bodies, thanks to its components, can be an excellent electricity conductor. As you get in contact with the metal surface, the electricity will redirect into your body, rather than flowing into the floor.

In any case, the possibility of a car being struck by lightning is extremely low, since strikes are attracted by the taller buildings in the area. Lastly, while lightning or thunderstorms are not something to take lightly, there are other dangers to keep in mind.

Even though you might not end up electrocuted while in your car, the sudden booming sound and explosion can make you jump or shock you.

Any Safety Tips If in a Car in a Lightning Storm?

The possibility of being struck by lightning is very low, and under 50 people per year die as a consequence of such eventuality. However, it is essential to take precautions from the moment you can either see or hear a storm to reduce the chances of becoming injured from it.

Indeed, while lightning itself does not cause a massive number of casualties, there are many risks associated with driving through storms.

Now you know everything that could help you during a thunderstorm. Just park in a safe spot, close all doors, windows, and roof, and put your safety lights on. That’s everything you need to do to avoid the possibility of being hit by a bolt. Don’t forget to wait at least 30 minutes after the storm has passed before carrying on with your journey.