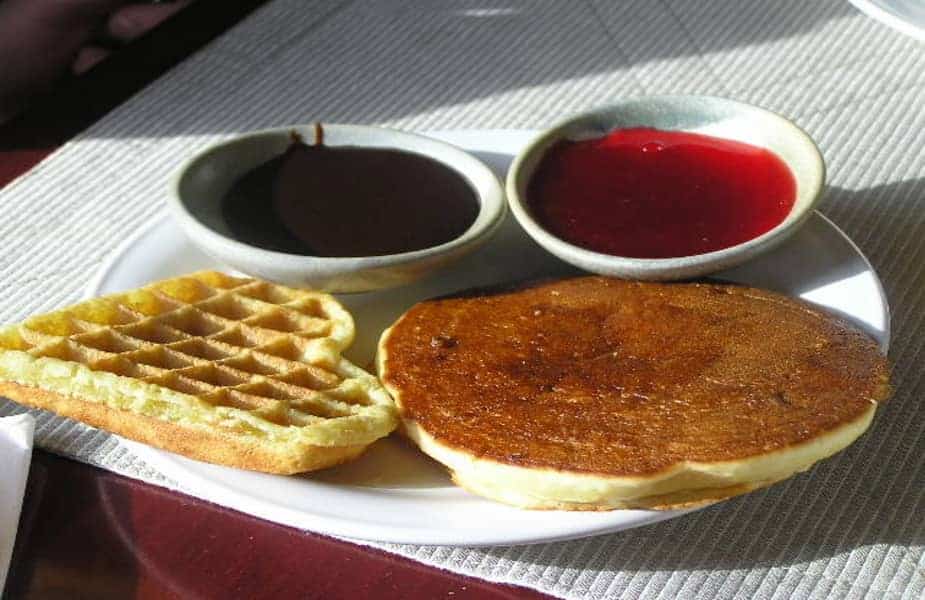 The main difference in taste and texture between pancakes and waffles comes from the variation in ingredients and how they are made. Baking powder that makes pancakes airier and lighter is often absent from waffles. Also, the egg in waffles is separated during the preparation phase of the recipe.

As you can see, small variations in the recipe, along with how they are made, make a world of difference. Let’s dive a bit deeper into the topic.

How Are Waffles Different From Pancakes?

The main physical differences between pancakes and waffles lie in the shape and texture. Pancakes are generally flat and round while waffles are often square with numerous surface ridges, nooks, and crannies. Waffles are also heavier and less fluffy due to variations in ingredients and preparation methods.

Let’s go through what causes the differences.

Here are the cooking methods for pancakes and waffles:

Typically, if using the same ingredients, pancake batter will be a bit thinner than waffle batter. This can be remedied by small variations in the ingredients.

Boxed “pancake mix” is usually a mixture of flour, salt, shortening, baking powder, and sometimes other ingredients, just packaged together for convenience. When using it to make batter for pancakes or waffles, the difference lies in the other items added.

If using Bisquick pancake mix, for example, you’ll use 2 cups of mix for both pancakes and waffles. You’ll add 2 cups of milk and 2 eggs for pancake batter. You’ll use 1 1/2 cups of milk, 2 tbsp of vegetable oil, and one egg for waffles.

Which Packaged Pancake or Waffle Mix is Best?

Which mix is the best generally depends on personal preference. While Bisquick is often seen as a household staple, there are other options. Aunt Jemima mix is sold in most stores, as well as Krusteaz, Hungry Jack store brands, and others, including organic and gluten-free versions.

What Brand of Waffle Mix Do Hotels Use?

Golden Malted is the largest commercial distributor of pancake and waffle mix and is the most common type found in hotels and motels.

Golden Malted pancake and waffle mix is the self-described choice of the “best hotels and restaurants around the world” since 1937. Boasting “If you’ve eaten a waffle at a hotel, most likely it was a Carbon’s Golden Malted….”

Their website includes recipes, an online shop, and a “waffle program” for schools, hotels, and restaurants. There are a variety of packaged mixes, including “just add water” versions. If you want to give a Golden Malted mix a whirl, you can visit them here.

Pancake and Waffle Batter from Scratch

When making both pancake or waffle batter from scratch, recipes typically call for eggs, butter, sugar, and leavening agents (such as baking powder). What you add after that will make all the difference.

Pancakes are often seen as more versatile; for instance, chocolate chips will melt more thoroughly through the batter than they would in a waffle due to the constraints of the waffle iron.

Pro Tip: To make extra fluffy pancakes, you can add a little baking powder or egg whites. Generally, baking powder would not be added at all to a waffle batter.

Food Network’s website has recipes for basic pancakes and waffles here, along with dozens of variations to try.

If super-fluffy pancakes are your aim, why not try sourdough pancakes

Sourdough, which has been around since ancient times, is a bread that uses natural leavening to rise. Instead of using a packaged yeast, sourdough starts with a “starter,” a slurry of water and flour that uses the natural bacteria and yeast in flour, activated when flour is mixed with water. Those natural bacteria give sourdough bread the same kind of tang that is found in yogurt.

What Can I Use as Waffle Add-Ins and Toppings?

Both pancakes and waffles are suited to adding all sorts of extras. Common add-ins include blueberries, oats, vanilla, cinnamon, sprinkles, and chocolate chips. Although butter and maple syrup are the classic toppings others include fruit, whipped cream, and other dessert-type options.

What you add to the batter depends on whether you’re looking for a savory or sweet pancake or waffle.

Toppings vary depending on the add-ins:

The Right Tool for the Job

If you’re going to be making pancakes and waffles on a regular basis, you’ll need a good griddle and a good waffle iron.

When it comes to griddles, some cooks swear by cast iron or steel models, which can be placed over a grill or stove burners. Others prefer the convenience of an electric griddle. Here are two considerations:

Here are my recommendations:

Pancakes and Waffles Around the Globe

Foods similar to pancakes and waffles can be found throughout the world. Almost every country has a version of a pancake.

There are many different variations of waffles as well:

No discussion including waffles would be complete without a look at the Belgian waffle, a restaurant staple.

Belgian waffles did indeed come from Belgium, where they are a street food. Generally called either gaufres in French or waufels in Flemish, there are several varieties found in Belgium. Liege waffles, made from a yeasted dough (rather than a batter), are encrusted with pearl sugar. Brussels waffles, which are closest to the Belgian waffles typically served in the U.S., are made from a yeasted dough.

There are many other types – a fruit waffle, a butter waffle, and a heart-shaped waffle among them. All have different ingredients and preparation.

Which is Healthier – Pancakes or Waffles?

Neither pancakes nor waffles are likely to be put in the health food aisle anytime soon. However, some choices can make them healthier.

Using whole wheat or gluten-free flour and opting for healthy toppings and add-ins like fruit and nuts can also make for a healthier pancake or waffle. There are also specific modifications that can be made based on your diet choices.

Pro Tip: If you find that the flavor is lacking in a basic waffle or pancake that features gluten-free flour, you can add a little cinnamon or vanilla.

Classic pancakes and waffles have a lot in common, with the batter generally showing only slight differences. Even so, the cooking method and add-ins vary greatly. There is almost no end to the variety of pancakes and waffles you can create once you get started. You’re limited only by your own inspiration and creativity.