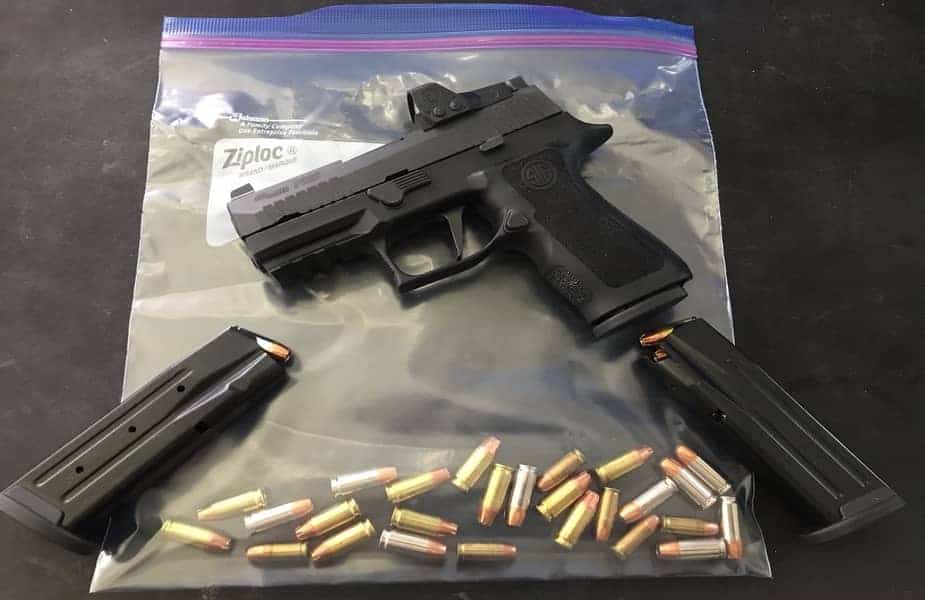 As a gun owner, you probably possess a lot of ammo. With ammunition comes the problem of storage – firearms have plenty of regulations and recommendations for safe storage, but what about keeping the ammo safe and secure? Should you store regular ammo in Ziplock bags?

You should not store ammunition in Ziplock bags because the bags don’t keep out moisture very effectively. While it can be a temporary storage solution when combined with a desiccant (to absorb humidity), it’s best to keep ammunition in ammo cans or the original containers.

In the rest of this article, we will discuss the pros and cons of storing your ammunition in resealable plastic bags. While some swear by Ziplocks as a storage method, there are safer ways to keep your ammo. We will also look at the recommended guidelines for ammo storage and legal requirements for buying and storing ammunition.

Ammunition storage is a tricky business – you must keep the ammo dry and cool, or it could degrade and become faulty over time. If the propellant inside the bullet is damp or damaged, it could also be less effective in the chamber (or even malfunction dangerously). That’s part of the reason why it’s vital to keep your ammunition stored well.

There are varying opinions about whether Ziplock bags are a practical (or even safe) way to store your ammunition. Gun owners disagree, and what works for one doesn’t work for another. What you do with your ammunition is your decision, but it is helpful to know why people choose to use (or not to use) specific containers.

However you decide to keep your ammunition, safety is the most critical factor. Keep ammo away from kids and locked up when you’re not in the house. If any of your ammunition gets damp or wet, throw it away. Never shoot ammo exposed to water – it can be hazardous.

Why Store Ammo in Ziplock Bags?

Many people who store ammunition in plastic bags do so for space efficiency or easy sorting. If you have many extra shots and the original boxes are too bulky, Ziplock bags might be a good option. This is especially true if you keep your ammo in a safe that seals and want to be able to fit it all.

The biggest potential issue with Ziplock bags is that they do not always keep out humidity very well. You can prevent wet bullets with a desiccant or moisture-absorbing packet (like those found in shoeboxes or other products to prevent moisture gathering). I recommend these desiccant silica gel packets (Please click for Amazon listing). I really like how they change color when moisture is present and the fact that they are rechargeable.

The moisture issue means Ziplock bags aren’t the best option for long-term storage, but they can be great for short-term storage or ammo transportation. Many gun users take their ammo to a range in a Ziplock so that they don’t have to lug around an ammo box or worry about the box blowing away in the wind.

Some gun owners choose to keep their ammo organized inside individual Ziplock bags but stored in larger sealed containers with a desiccant package. The ammo is usually organized into the size or the number of rounds used in one outing to the range. This system provides a sealed container’s safety to keep the ammo dry with the benefits of organization within the plastic bags.

Why Not Store Ammo in Ziplock Bags?

The majority of gun owners prefer not to store ammunition in Ziplock bags, mainly due to the fear of moisture being locked inside them, as are various other options available for safely storing ammo. Ziplock bags are also not that sturdy in the long run and can break if too much pressure is put on them from within the bag.

Most gun experts recommend a better seal than a Ziplock bag, especially since Ziplock bags aren’t created to keep 100% of air moisture out. While they are mostly waterproof, the tiny bit of water that gets in could still cause damage to the fuel inside the ammunition. The plastic could also trap heat inside of the bag and cause issues that way.

Pro Tip: Ziplock bags aren’t the safest option for ammo storage, nor are they the tidiest. It isn’t easy to stack bags of Ziplocks, even if the ammo inside is well-organized. It’s easier to keep ammunition in ammo boxes or the original packaging, and these usually store better in situations where you need to stack the boxes.

The ideal place to store ammunition is somewhere cool and dry. If ammo gets too hot or remains in direct sunlight, it could affect the propellant in the casing and prevent the bullet from firing regularly. If it gets too damp, the ammo could malfunction and not be as powerful or even explode in the chamber. Proper storage prevents either of these.

For the most part, you should store ammo in the original container or designated ammo cans. Ammo cans or boxes are made specifically for storing ammunition and are sealed to prevent excess moisture. I recommend this ammo can. If you buy multiple and stack them, they can be very space-efficient.

While these safety recommendations are geared more towards ammo boxes or canisters, the focus is on where you put the ammo in the house instead of what container you choose for storage.

In addition to ammo cans or boxes, here are some common and useful storage solutions for ammunition:

It is still important to store the ammo in any of these containers in a cool and dark place. A shelf in a closet is ideal, as it usually is climate-controlled and rarely comes into direct sunlight. This location is also a smart choice because it is out of the way of children or pets and isn’t directly accessible.

It’s worth noting that ammunition does not need to be in a fireproof container. If your house is on fire, the ammo will not shoot off everywhere, as it requires the pressure of a gun chamber to explode into bullets. The gunpowder inside is highly flammable and can catch fire, but it will mostly just sizzle inside the casing.

There are very few legal requirements for buying or storing firearms ammunition in the United States. A few counties in California track the ammo they sell, and just under half of the states prohibit the purchase or selling of several types of more dangerous ammunition. However, other than that, there are no federal rules on ammo.

It is not required but highly recommended by the Bureau of Alcohol, Tobacco, Firearms, and Explosives to store ammo in a separate place from your firearms. Gun owners should lock firearms away during non-use or when you are away. The ammo should also be locked away when not in use or when children are in the house.