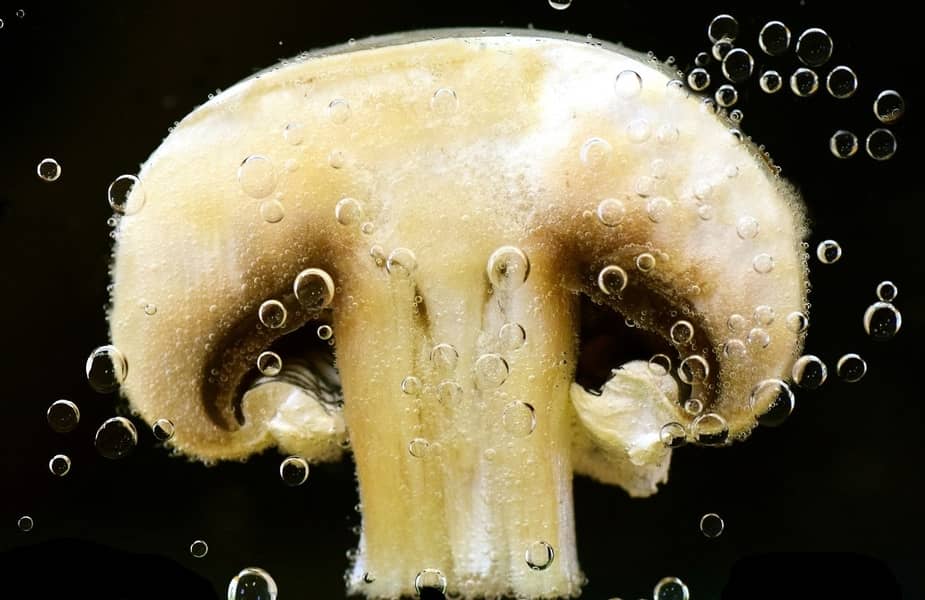 One of my guilty pleasures is pan-frying a fistful of mushrooms in the pan as a side for practically any dish. My wife saw me do this once without washing them and told me I was crazy. I have been doing this all of my adult life without ill effects, but is she right? Or, is it safe to eat mushrooms without washing them?

It is generally safe to eat commercially grown and packaged mushrooms without washing them. However, it’s still usually a good idea to clean them before cooking since dirt and debris can be present in the package. On the other hand, wild-harvested mushrooms should always be washed before consumption.

When we purchase our mushrooms nicely packaged at the grocery store, they are usually pre-cleaned and often even chopped to make our lives easier when preparing them as part of a meal. However, there is still sometimes a bit of dirt intermingled into the container. So while it may not be 100% necessary to wash store-bought shrooms, I now usually give them a cleaning right before I cook them up.

The rest of the article will go into greater depth about whether or not you should wash your mushrooms before consuming this. I’ll also give you a few tips on how to do it correctly and also detail how to recognize when mushrooms have gone bad.

Are You Supposed To Wash Mushrooms?

Mushrooms, even store-bought mushrooms, should be washed before they are cooked and consumed or used in their raw form.

Mushrooms thrive in compost, including compost with animal manure to feed the fungus that produces the mushroom. As you can imagine, this is not a particularly clean environment, and it is rich in bacteria. And even though store-bought mushrooms have usually already been thoroughly cleaned before they go to your local grocery, it is highly recommended that you just play it safe and double up on the process.

There is a common myth in the cooking world that mushrooms should not be washed, but this is a common misconception. The concern is that the mushrooms would absorb the water and become soft and mushy if they are exposed to water. But this is simply not true since mushrooms consist primarily of water anyway. This can be seen by the amount of water that comes out of them when they are cooked.

It is perfectly acceptable and, in some cases, necessary to wash mushrooms before use. Besides, I would rather run the risk of having soggy mushrooms than ingest unnecessary amounts of bacteria.

If you happen to be cooking for someone who frowns upon mushrooms being washed, you can actually clean them by rubbing them off with a piece of kitchen paper towel. However, this is a time-consuming method of cleaning but does work.

How Do You Clean Mushrooms Properly?

There are some cases where commercially packed mushrooms are not washed because it is known to reduce their storage shelf-life and cause them to rot more quickly. The way that these producers clean their mushrooms before packaging is to simply shake them to remove the excess dirt and other debris.

You can follow basically the exact same process at home.

The way to clean mushrooms is to brush off as many of the large clumps of dirt as possible to make sure they don’t get into the food. Then, a quick rinse under running water and a pat dry with a kitchen towel is all that you need to adequately clean mushrooms before using them.

Cooking mushrooms is an excellent way to kill bacteria that may be clinging on. However, the good news is that while mushrooms grow in a bacteria-rich environment, the bacteria do not generally attach themselves to the outside of the mushrooms since there is no benefit to the bacteria.

Thus, harvesting the mushrooms by cutting them at the base with a sharp knife is preferable to pulling them out. If pulled rather than cut, you increase the risk of bringing along large clumps of the bacteria-rich base that the mushrooms are being grown on.

Washing mushrooms is normally sufficient to eliminate any lingering bacteria, and the cooking process will almost certainly kill any remaining bacteria with the high heat.

If you are harvesting mushrooms from the wild, you will need to take additional care, and depending on what the mushrooms are growing in, it may be the deciding factor on whether you should harvest them or not. It might be obvious, but I would avoid picking mushrooms growing directly out of dung or anything that looks a bit dubious.

Are Unwashed Mushrooms Safe To Eat?

Commercially grown and packaged mushrooms are most certainly safe to eat unwashed. The growing and packaging take place in controlled environments designed to protect from bacterial contamination.

In fact, many people not only do not wash commercially produced mushrooms but also do not cook them. They can be sliced and added raw to a salad or placed on top of a pizza, depending on personal preference, and this is a perfectly safe way to consume these mushrooms.

As long as you take the precaution to brush off any remaining clumps of dirt, you can forego the washing.

Eating unwashed mushrooms that you have harvested from the wilderness may be a different story since you are not in control of the environment that the mushrooms have grown in or what they have been exposed to. In this instance, it would be better to rather err on the side of caution and thoroughly wash any wild-harvested mushrooms prior to use.

From a survival-situation point of view, if you are harvesting mushrooms to eat, you do not want to complicate your situation even further by potentially adding a bout of diarrhea to your dilemma. You should also only harvest wild mushrooms if you are an expert in the local fungi species and which ones are safe to eat and which ones will pose any health concerns for you.

How Do You Know When Sliced Mushrooms Go Bad?

As with most fresh foods, mushrooms have a limited shelf-life and storage capability. So, if your sliced mushrooms have been in the fridge for a while, how do you know if they are still good to eat or whether they have started to go bad and should be thrown away?

Mushrooms that have started to go bad will begin to undergo a few changes that will give you clues as to whether they can be used or discarded.

Ultimately, mushrooms are not that expensive. Personally, I would not chance eating anything that isn’t fresh or at least within the best-by date period. I mean, think about it. You are eating fungi. Is it worth the risk of eating bad fungi? No thanks.

Can You Get Food Poisoning From Mushrooms?

As the mushrooms start to decompose, the micro-organisms that are responsible for their decomposition will give off toxins as part of their waste products. These toxins can make you ill and definitely cause food poisoning. And don’t think cooking them will fix the problem. Toxins are not broken down by heat, so cooking mushrooms that have gone bad will not render them safe. They should be discarded.

Why Do Mushrooms Stink?

Fresh mushrooms have a distinctive odor, and it is one of the means that is often used to identify different species. In the case of store-bought mushrooms, they should have a clean earthy smell to them. While some people think they “stink,” others find this smell pleasant. To each their own, I guess?

However, if you open the container that your mushrooms are stored in, and you are greeted by a strong ammonia odor or a fishy type odor, then your mushrooms have gone bad. This is a definite indicator that you should toss the mushrooms out.

Commercially produced mushrooms are known to be safe to eat without being washed and can even safely be eaten without being cooked. This is because they are grown and packaged in carefully controlled conditions to prevent contamination.

The best practice for washing mushrooms is to only wash them just before consumption. Once they have been washed, they do not store well, even in a fridge, and may start to rot very quickly.